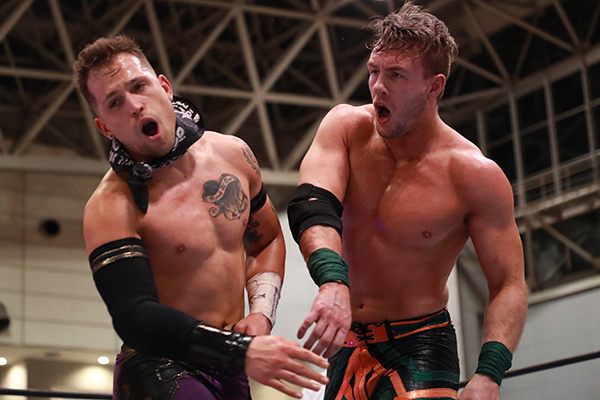 What a fun match. Very simple match, but very effective in establishing Narita’s growth as a wrestler. There was a lot of amateur style mat work to start and the match built from there.

The closing stretch was really hot. There were tons of reversals and Narita got a couple of near falls. There was a great sequence where Narita and Taguchi were fighting over locking in submissions. In a sign of Narita’s progress, instead of just a Crab Hold, he locked Taguchi into a Texas Cloverleaf. Eventually Taguchi got the win with the Ankle Lock after he did an elbow drop on Narita’s leg in order to finally get the tap out. A great opener. ***1/2

This was a match that I was looking forward to. I am a longtime Kanemaru fan and I thought him and Gresham could mix together nicely. Despite Kanemaru’s Heel Master gimmick, he is actually a good technical wrestler and can do trickster stuff that can counter Gresham’s offence.

Kanemaru hung in there with Gresham through the whole match showing he can still go, but ultimately, his heel style backfired on him, as Gresham locked on an Octopus Hold while Kanemaru was holding his bottle of Whiskey for the tap out. ***1/4

I was not particularly impressed with DOUKI early on in the tournament. However, as it has gone on, he’s become perfectly decent and can deliver a *** match.

DOUKI did his usual schtick and attacked Romero before the bell. They brawled outside for a bit. The match was just there for the the first five minutes. Things began to pick up once Romero hit a Huricanrana. This match then turned into something fun with both guys trading big moves including DOUKI whipping out a modified Gory Bomb which we hadn’t seen from him before.

Romero eventually got the win with the Diablo Armbar. ***1/4

After a weak start, Scurll is becoming perfectly fine in this tournament. This was another match that had a forgettable first five or so minutes. Things then picked up and both guys did a bunch of reversals. I thought Titan was looking a little better here than he has thus far in the tournament.

Marty eventually got the win with the Black Plague at 10:29. This was a good match, but there’s nothing much more to say about it. ***1/4

I don’t hate BUSHI, but he can be hit or miss for me. I thought he looked pretty good here. The fact that this match went only 8:36 helped I think.

Unlike some of the other matches on this card, the short length of this meant we got lots of action early on. BUSHI got his some nice high spots and kept some of his more boring brawling to a minimum. I think Bandido has had a shaky tournament so far outside of his match with Ospreay. However, I think Bandido is finding his footing in New Japan as the tournament has gone on and looked pretty damn good here. BUSHI got the win with the MX in a fun spring. ***1/2

Another great Takagi match. Tiger Mask worked over Takagi’s leg a bit early on in this match, and Takagi took a lot of offence in general in this match.

Crowd was really hot for Tiger Mask getting some near falls on Takagi, and Takagi actually sold things like he might be in a bit of danger.

To the surprise of no one, Takagi got the win here with the Last of the Dragon, though Tiger Mask managed to get a big kick out of a Pumping Bomber right before that. Really fun match, but I have to wonder, what a younger Tiger Mask against Takagi could have produced. ***1/2

ELP has hit some incredible highs in this tournament against Will Ospreay and Rocky Romero. That being said, I was disappointed with his performance in this match. There wasn’t much to the sequences when he was in control and he did pretty standard heel stuff that didn’t grab me, though his heel stuff is over with the audience. But the heel stuff itself was pretty cliche with ELP jumping YOH outside before the bell. Poor YOH even had to sell being hit in the head with a running shoe by ELP that didn’t look particularly painful.

The only saving grace of this match was that there were some highspots, but it was uneven overall.

YOH gets the upset when ELP went to hit him with the RevPro Cruiserweight Title and YOH avoids it and landed an O’Connor Roll for the win. This went 12:03 and still felt too long at points. **3/4

While this match didn’t hit the highs of their matches for PWA in Australia, this was still an awesome match, and told a great story.

Eagles started this match still very much a heel, not wanting to shake Ospreay’s hand at the beginning of the match.

Eagles would go on to work over Ospreay’s leg throughout the match. But the match wasn’t just limb work. There was of course some insane spots like Eagles giving Ospreay a Shiranui on the apron.

My only real criticism of this match was that I thought is slowed down a bit in the middle portion. This match went 28:01, but only felt like its length in the middle. Once the 20 minute mark hit, it was all action.

The last three minutes were wild. ELP came out to interfere. Ospreay initially managed to slag him off when he tried to interrupt a Shooting Star Press. But soon after that, ELP would hit Ospreay’s leg with a chair while Red Shoes Unno was knocked out. Eagles slapped on the Ron Miller Special to get the tap out, but after the match Eagles was pissed that ELP interfered, and you couldn’t tease a future face turn any harder. This was the must-watch match of the show. ****1/4

Ishimori hasn’t had the greatest tournament since the Scurll match. It has been speculated that Ishimori was injured in that match, and Kevin Kelly mentioned that he had in fact had and that it was his neck that was bothering him.

This match was technically good. I thought it started well but then just kind of meandered from there. Ishimori simply wasn’t able to work to the kind of pace that he is capable of. The other major problem with this match is that it went 20:27. This was in line with the length of the main events during this tournament, but given Ishimori’s condition, this should have been adjusted. Even taking five minutes off of this match, I think, would have greatly helped it.

Now despite my criticisms, once against SHO looked fantastic and busted out a whole lot of great moves. And though I thought the build-up to the end wasn’t particularly exciting, I thought Ishimori’s counter of the Shock Arrow with the Bloody Cross for the win was cool.

Despite my criticism, this was still a good match. It’s a credit to Ishimori that he can still have a  match like this despite a neck injury. ***1/2

There is no such thing as a bad show on this BOSJ tour. However, this was the weakest of the “all tournament matches” shows. It really only has one must-watch match, but the floor here was still pretty high.

Despite Dragon Lee getting a forfeit win over TAKA Michinoku, he’s been eliminated. Block A is going to come down to Ishimori vs. Takagi on the last night of Block A.

Over in Block B, there is currently a four way tie for first place with Eagles, Taguchi, ELP, and Ospreay. The final night of Block B sees Taguchi vs. Ospreay, ELP vs. DOUKI, and YOH vs. Robbie Eagles. This looks like looks Ospreay winning while ELP and Eagles being upset. Though Taguchi might not even make it to the final Block B night in contention as he’s facing ELP on May 30 in Osaka. You can make even more convoluted scenarios on how YOH or BUSHI can win it but that is wildly unlikely. 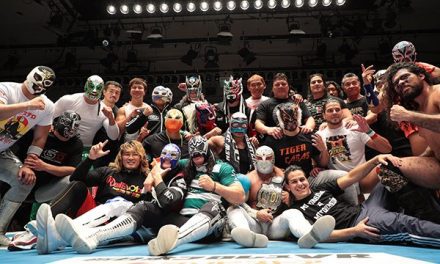