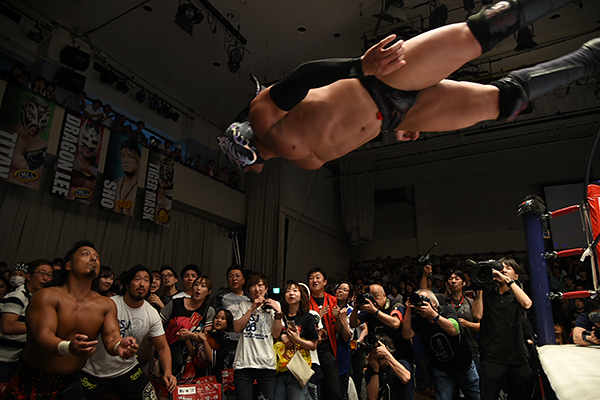 Best of the Super Juniors 26 Night 8

It struck me during this match, as it has throughout this tournament, how seamlessly El Phantasmo has fitted in to New Japan. He was an excellent prick here against young Narita, who continues to show tremendous fire and get over with the crowd. There were some believable nearfalls in this for the young lion, before he eventually succumbed to Phantasmo’s spin-out neckbreaker and a splash. Phantasmo moves to 5-0, whilst Narita is now officially out of the competition. ***

Post-match, Phantasmo laid Narita out with a CR2.

Taka Michinoku may have been established as the A Block fall guy, but he impressed me more here than Titan. Taka controlled a lot of the match by working over Titan’s arms, but got caught out going for the Michinoku Driver. It was reversed into a Falcon Arrow variation by Titan, but the sloppiness of the pin and the awkward silence after the match as people tried to work out whether the luchador had won or not pulls down what was a relatively fun contest. **1/2

Much like he did against DOUKI the day before, BUSHI started this contest hot, attacking before the bell and taking the fight to Eagles in a fun back-and-forth. Aside from a springboard dropkick to the knee from Eagles that whiffed badly, this was crisp, tight and all over in about 8 minutes. BUSHI managed to escape the Rob Miller Special, connect with a lungblower and then finish off Eagles with an MX to pick up his second win. ***

We got grumpy Tiger Mask here and I’m unashamedly a grumpy Tiger Mask guy. He repeatedly connected with kicks, knees and body shots to wind Gresham, with Mask also matching the ROH star in the grappling exchanges. It was one of those exchanges that saw Gresham sneak out the win, leveraging a headscissor into a pin for his third tournament victory. I’m probably the high man here, but I thought this was really fun. ***1/2

In a shocking turn of events, Suzuki-gun’s DOUKI attacked before the bell!

This started with some crowd brawling and although some of DOUKI’s offence looked sloppy (particularly the slingshot DDT), I think he has started to find his niche in this tournament and deliver solid performances. That was the case here, as he played his part in an entertaining back-and-forth that saw YOH emerge with the victory after countering the Suplex de la luna into a superkick and dragon suplex. YOH moves to three wins for the tournament, whilst DOUKI’s losing run goes to four. **3/4

Scurll feigned an injury in his entrance for this one, before attacking SHO before the bell. If that was designed to fire the crowd up, it was probably perfunctory as the Korakuen crowd were very hot for SHO, who is really showcasing his talent in this tournament. Scurll dominated the early going, but a superkick to SHO’s taped up ear saw the Roppongi 3K member fire up. From there to the finish, this was great. There were some believable nearfalls and the crowd were into every exchange. After Scurll kicked out of the first Shock Arrow, SHO connected with another to pick up his second tournament win. ****

The battle to determine the true coach of NJPW!

I loved everything about this. With these joint block shows, you need something a little bit different now and again, and this filled that brief perfectly. There was a nice mix of basketball-based comedy and serious exchanges to make this compelling and I felt Rocky delivered another stellar performance. Taguchi picked up the win after a series of cradles. Romero is now facing down the barrel of elimination, setting up an interesting dynamic for his match with El Phantasmo on Night 9. ***1/2

Like with Yano in the G1, Kanemaru is someone you can lose to in tournaments like this and it does no harm to a wrestler’s credibility. Unlike with Yano however, I actually enjoy Kanemaru’s conniving ways. That was the case here, as Kanemaru followed up his victory over SHO with another one over Ishimori.

A repeat of the countout that cost SHO was teased early on, but Kanemaru picked up the win with a roll-up after he had used the ref as a shield and got Red Shoes distracted with the whisky. What a wonderful, sleazy cheat. **

Will Ospreay is probably the best wrestler in the world.

It has been a common adage recently that Ospreay seems to have had a lot of people’s best matches, and I think this contest was no different. In the space of about 18 minutes, Bandido and Ospreay put together a genuine MOTY contender and Bandido left the ring to a standing ovation, a made man in NJPW.

The crowd, which had been hot all night, seemed to come even more alive during this contest, as these two demonstrated excellent chemistry, trading beautifully crisp counters and strikes. The match moving along quite nicely, and then Bandido hit a springboard shooting star press to the outside.

Everything these two tried in this match worked. Dragonrana from Bandido reversed into a pinning attempt for Ospreay? Check. Bandido connecting with the 21 Plex, only for Ospreay to somehow land on his feet? Check.

Ospreay eventually put Bandido away after catching his moonsault attempt, flipping him over and landing a Stormbreaker for his fourth win of the tournament. Simply stunning. ****3/4

Following that match was always going to be difficult, but these two went close in what would be match of the night on most nights.

Working out how to beat Shingo has been a common theme of this tournament, with Shingo’s previous four opponents trying out differing approaches before eventually being sucked into a physical trade-off that the former Dragon Gate ace would inevitably win. From the outset here, Shingo looked dominant but Lee sought to counter him with vicious strikes, quick-fire moves and crazy stuff like this.

Shingo got a close nearfall after a vicious Pumping Bomber, only for Lee to respond with kicks and knees. Lee hit a series of knees, a poison rana and a rebound German suplex, only for Shingo to kick out at 1. Shingo then picked up his fifth straight win, reversing the desnucadora into a Last of the Dragon. ****1/2

Much like the first Korakuen show of this year’s Best of the Super Juniors, this was a breezy watch highlighted by the best match in the tournament so far, another excellent Shingo Takagi performance and SHO impressing again. If you’re pushed for time, focus on Ospreay/Bandido, Takagi/Lee and SHO/Scurll, but overall this is a great show well worth your time. 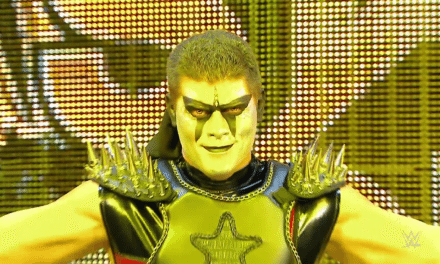 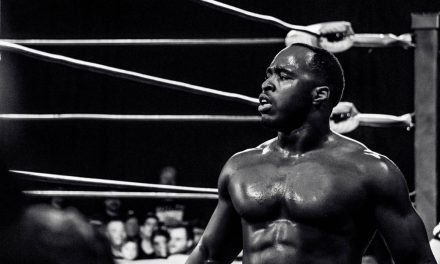 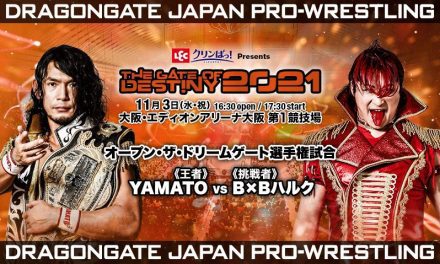