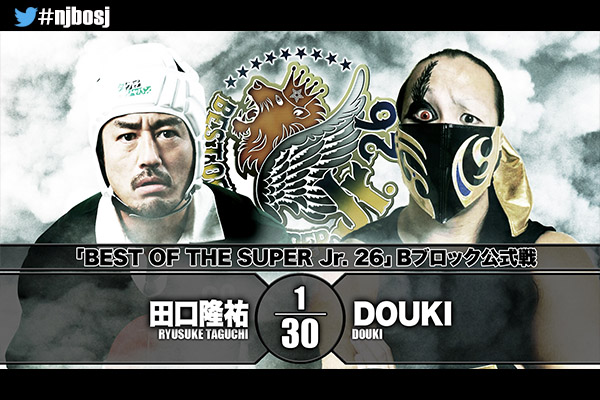 NJPW clearly sees big things in Narita, by the standards of a Young Lion he is getting a fairly big push. It’s not normal for a Young Lion to be included in a major tournament like this, let alone two since he was also in the New Japan Cup. From his performances so far it’s easy to see why though. He might be a five-tool player. His selling is already at a very high level and he has developed an excellent crowd connection. The few times he gets to be offense he is crisp and smooth.

Here he had an excellent match with Eagles. Most of the match is Eagles punishing Narita’s knee and Narita just selling the hell out of the beatdown. He gets a brief hope spot and his hometown crowd just becomes unglued. But he is still a Young Lion so ultimately he falls. Who knows how much longer he will stay a Young Lion though, given the speed at which he is developing. Wrestlers are not supposed to be this good at this stage of their career. The future for Narta is bright and he might even be the one to take the position as Ace of the promotion from Okada.

Both men looking to bounce back after losses on Night 2. YOH, unfortunately, tends to get overshadowed by his tag team partner SHO, but he is a very good wrestler in his own right and is likely to ascend to the top of the Junior Division soon as well.

This match felt like both man somewhat holding back. They worked it at a decent pace and kept it simple. But there were very few highlights that stood out. I’m a little bit disappointed but I hope we will some better performances from these two later in the tournament.

ELP has acquitted himself quite nicely to New Japan so far. Generally, it takes non-Japanese wrestlers a little while to adjust, but he just fit in from his very first match. He is getting a big push right out of the gate and will be a contender to win his block. This match, however, like the preceding was very light on memorable things and ended up just being kind of there. Out of all of the matches of the night, this was certainly one of them.

This was awesome. Look there was no reason for this match to be this good. Ospreay is the up and coming star who will move up to heavyweight soon and Rocky is slowing phasing out his in-ring career. This was just a random tournament in Aomori. For all intents and purposes, they could have just gone out there and had an okay ten-minute match like the previous two. Instead, these two decided to go out there and tear the house down for 25 minutes.

The pace of this match was just relentless. Ospreay has started to incorporate more and more power moves into his arsenal since it became clear that he will move up to heavyweight too. It really accentuates his increased muscularity and shows that he is now a step above the majority of the junior division.

These two were just countering each other at every turn and they managed to build up Rocky’s armbar as a deadly move that Will tried to desperately avoid. As the match went along the crowd started to pick up and was incredibly hot by the time we got to the closing stretch. In the end, Ospreay manages to finally put Rocky away with the Storm Breaker. Ospreay is easily a top 10 wrestler in the world right now and performances like this show why.

DOUKI is an okay wrestler but he does not belong in New Japan. He should be wrestling in a dingy warehouse and not in well-lit arenas. When I am going to Japan next month I want to see him on the J-Stage show and not in Ryogoku. He just sticks out like a sore thumb and doesn’t fit.

Given who was involved in this I’m just happy that no pipes were used in this match. What we did get though was Suzuki-gun shenanigans and lots of it. Aside from that, it ended up being a decent match thanks to Taguchi. Every year Taguchi tends to pull out all the stops for this tournament and he is on track to do so again. He had a great match with YOH and managed to carry DOUKI to something watchable here.

A decent little show with two great matches. I highly encourage you to watch Ospreay vs Rocky Romero as they had a barnburner and the best match of the tournament so far. Ren Narita vs Robbie Eagles was excellent as well and shows what a special talent Narita truly is. The rest is mostly skippable but decent enough. Overall one of the better nights of the tournament so far.