This week on Wrestling Omakase John welcomes back longtime guest Jesse for her first appearance of 2019! We catch up a little at the start including talking the big KO-D Openweight Title win of Tetsuya Endo from DDT’s US show last month before turning our attention toward King of DDT. John and Jesse break down all seven first-round matches, the special Loser Resurrection battle royale, and the four second-round matches. Once we’re down recapping the first two rounds we turn our attention to DDT’s big upcoming schedule, including the semis and finals of King of DDT next week, a very unique Osaka card to celebrate Referee Matsui’s 25th anniversary in wrestling, and finally the major matches from next month’s Wrestle Matsuyamania show in Ehime.

Then we turn our attention to Big Japan’s major 5/5 show, Endless Survivor, breaking down all nine matches from the card. We discuss a lack of deathmatches on the card and some possible explanations, another new young lion and the recent influx of young talent in Japan in general, an awesome All Asia tag title match, a disappointing Okabayashi vs. Sekimoto strong title match, and a strong main event with Isami Kodaka’s triumph. Finally, we wrap things up with a brief mailbag including your questions on future BJW challengers and more. It’s all things DDT and BJW, this week.

Music of the Mat #80: Christian Rock 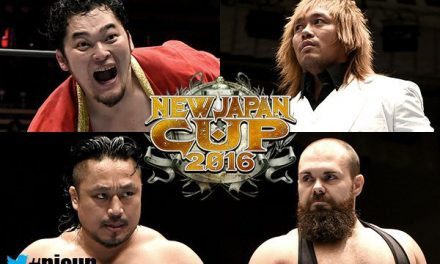