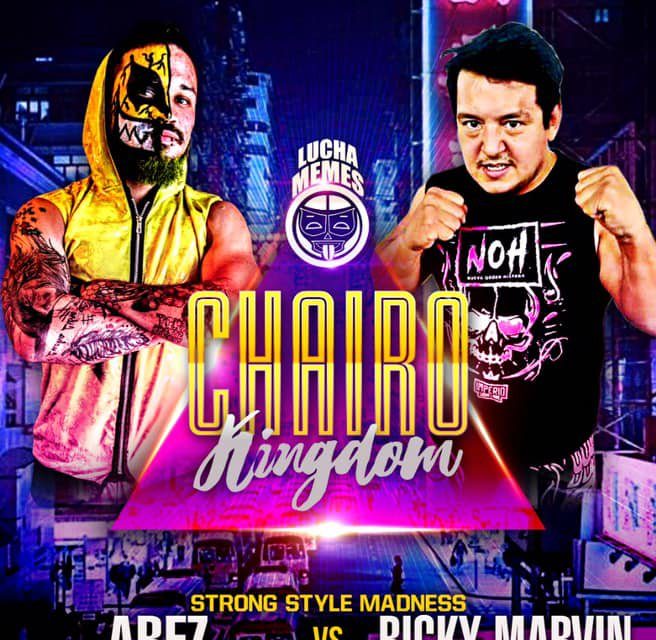 No, Lucha Memes is not a Facebook meme page, it’s an important indie lucha promotion that—as you can see—is not very creative with its title concepts but prides itself on delivering great shows that usually showcase a mix of Mexico’s best young wrestlers, established CMLL legends and the next wave of top lucha stars.

It takes a while for Lucha Memes’ full shows to make tape, so we usually have to wait a while to watch them; the most recent ‘premiere’ was Chairo Kingdom, a strong looking show featuring some of lucha’s best up-and-coming talent such as Arez and Aramis, as well as established veterans like Ricky Marvin and Virus.

A tag match that started slow and clunky but found it’s stride on the second half, evolving into a very fun spotfest that had so many dives that you could see big amounts of dust in the air as luchador after luchador landed on the dirt floor. I didn’t know the majority of the names participating here and while no one convinced me as ‘must-see’ talent in the future, I ended up enjoying everyone’s work. Iron Kid is the name I know well, and while some of this stuff looked rough, his creativity and crazy maneuvers made up for it: his dives might have been my favorites out of all the madness of this match… unfortunately, he was the man pinned here as Murciélago Plateado – who might have been the MVP of the match – hit a 450° for the win. ***½

These guys are brothers, so of course, they beat the holy hell out of each other. The match started with mat work and grappling, then it became a brawl in the floor with some nasty dives thrown here and there. Next, we saw some stiff moves in the ring, an incredible moonsault by Dragon Bane and a cool looking strong style inspired slap battle that was followed by a botched crucifix bomb and an inverted huracarrana by Dragon Bane for the win. I don’t know who was at fault for the botch in the finishing stretch, but thanks to the angle of the camera, it looked quite bad and ruined the ending for me. The selling of the match wasn’t great and it had some execution issues, but the work was hard and fast so I was always engaged by the action. Definitely worth a watch, specially if you just want to see two men beating each other at a crazy pace. ***½

50 year old lucha maestro Virus is a Lucha Memes regular that is always delivering the goods and helping young luchadores get to the next level. In this case, Flamita is already an established star so this was more in the vain of a ‘mini dream match’… that didn’t live up to the expectation. It was a nice, clean bout that didn’t reach any special high; we saw some great submission holds from Virus but Flamita did nothing to impress; lately he’s been hit or miss for me in singles matches, and this was in the latter section. The finishing stretch was great though, as Virus used a cazadora to take Flamita out of the top rope, and then finished him with brutal Vertebreaker. ***

Uff… this was bad. I love him, but I’m not sure Super Crazy can go anymore as he looked very sluggish and uninspired every step of the way (not a surprise if you saw his last AJPW tour). Half of the match was a very bland brawl around the ring that lacked any sort of intensity, then Super Crazy hit some moves in slow motion and Aeroboy had a little but underwhelming comeback that was cut short after Super Crazy—in the most lazy way possible—moved out of the way of a Swanton Bomb. Super connected with a moonsault and locked Aeroboy in a Tapatía to get the win via submission. A very boring match that, despite being shorter than 10 minutes, felt long and tedious. Also, Vic Martz in commentary was awful and offensive. **

Nice match that ended just as I was getting invested, but still managed to tell a cool story. Aramis is one of Mexico’s hottest young indie luchadores that closed 2018 strong by unmasking Eterno in an excellent Apuestas match. In Chairo Kingdom, Aramis had a chance to redeem himself against Negro Casas, who defeated him one year ago: in that match, Aramis showed inexperience and got a little too cocky trying to use La Casita on it’s master, but Negro reversed the attempt into his own Casita to get the win.

This time, Aramis got grounded by Negro early on the match, who very intelligently kept cutting the pace to impose his style. Aramis worked hard to get some nearfalls but Negro kept reversing his moves, not allowing him to fully control the action. And Ricky Morton is not the only 50+ year old that can hit a Canadian Destroyer, as Negro hit the devastating move near the end of the match but Aramis survived. Seconds after that, the youngling managed to get the best out of a strike exchange in the top rope, hitting a crucial missile dropkick for another nearfall… and that’s when Aramis showed his inexperience again: he got frustrated and started arguing with the ref, Negro immediately took advantage, hit a dropkick to the knees and tried to go to for La Casita, but Aramis countered to a Cazadora that then turned into a great ankle lock that submitted Negro. Yes, Aramis showed lack of experience again, but he also showed how much he had progressed in one year by outsmarting one of the most intelligent wrestlers in the world. Technically, the match itself won’t blow you away but the storytelling was good, and that kind of long-term booking is something you rarely see in lucha nowadays. ***½

About 6 years ago in the middle of a multi-man match, Arez and Ricky Marvin had a brutal slap exchange that left an emotional mark on the former. This was the first time they were facing one-on-one and it seemed like Arez had been building a vendetta because he wrestled with ferocious intensity, trying to prove his worth to Ricky. Arez has been gaining important experience overseas, wrestling in China for oWe and having a couple of matches during WrestleMania Weekend 2019 and it seemed Ricky Marvin was hungry to face this new version of Arez; he asked for the match and finally got his chance.

This was absolutely fantastic. After a brief grapple exchange where you could already hear the crowd’s excitement, Ricky Marvin started to aggressively work on Arez’ arm, stomping it and twisting his fingers. Arez managed to get back into the match using his speed: he threw Ricky out of the ring and followed through with a tope suicida. After more punishment, Arez dodged a couple of Ricky’s slaps as if saying ‘not again, you bastard!’. Arez wasn’t going to be slapped around so easily… or at least that’s what he thought. Ricky unleashed a barrage of hard moves, including a clothesline and a powerbomb to the turnbuckle, but Arez immediately superkicked him for a nearfall. After a great build, Arez finally slapped the beejesus out of Arez, who responded in kind to start an incredible strong style slap exchange that drove the crowd into a frenzy. The match kicked into high gear as the slaps became more savage and both guys exchanged moves at incredible pace; Arez managed to hit his Saharawi suplex for a very dramatic nearfall. Ricky countered a clothesline to hit Santa María, but Arez kicked out at 1! Holy shit. Arez got up but was immediately decapitated by Marvin, who then spiked his head to the mat for the win. Incredible finishing stretch to a match that had tremendous psychology, a red hot crowd and an impeccable performance by both men. This is one of my favorite Mexican matches of 2019 so far. Go out of your way to see it. ****¼

After the match, Ricky Marvin showed his respect to Arez: “Thank you Arena Coacalco for supporting me and Arez, I hope you liked this match. Arez I recognize that, after 6 years, you’ve grown a lot and today, you earned my respect. If you want revenge or whatever, I will grant it to you”

Arez buried a fan that wouldn’t shut up to let him talk and answered Ricky: ‘This people deserve a hair vs. hair match between you and me. Today, we wrote history but in order to make it more special, let’s have a Hair vs. Hair match in the future’. Ricky Marvin accepted or at least that’s what José Manuel Guillén said on commentary (the mic stopped working before that).

Gato de Ecatepec is a comedy wrestler that, thanks to his charm as well as peculiar name and outfit, has become quite popular in Lucha Memes. But to be honest, he’s not a very good wrestler and it showed as this was just a plunder match with not much going on. After just a couple of minutes, Demus won the first fall with a Balaguesa and then started arguing because he didn’t know this was a 2 out of 3 falls bout, he got cocky and soon Gato de Ecatepec earned a pinfall to tie the match.

The third fall was fun but it dragged a little; both men used beer bottles to draw blood, Gato had a little run where he connected with three tope suicidas and we saw a ton of biting. I’m gonna be fair here: there’s something very special in seeing a mother with a baby in her arms run away from front row mere seconds before a man called ‘Gato de Ecatepec’ is about to bite the bloodied forehead of his opponent just where she was seated. Gato used a couple of horrible dives to get some nearfalls; Demus hit a plancha and El Purgatorio (Package Piledriver) for the win. Not the best Apuestas match, but it had its charm. **¾

I had great fun reviewing this show that is definitely worth watching if you are a lucha fan; if you are not, then I strongly recommend at least watching the fantastic Ricky Marvin vs. Arez match. Also, it’s a short show: the YouTube video is 1 hour and 46 minutes long, but approximately 15 minutes of it are interviews and post-match promos and – except for one match – it’s a very easy, digestible watch.

Lucha Memes is always building cool cards like this and I feel that Daniel Ledesma (the promoter) is genuinely interested in giving young luchadores a chance. The best and most refreshing thing about this company is that they feature many single matches, something that’s not typical in lucha libre. +Lucha’s YouTube is a great platform to enjoy all their shows for free, but I wonder if it’s worth for Ledesma to have his own streaming platform and if fans would be willing to pay for that. Whatever the case is, I hope this company sticks to it’s current formula in order to keep growing. And, also be on the lookout for their next show (Battle of Naucalpan), which got rave reviews from everyone in attendance. 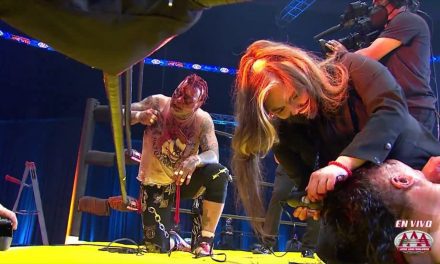