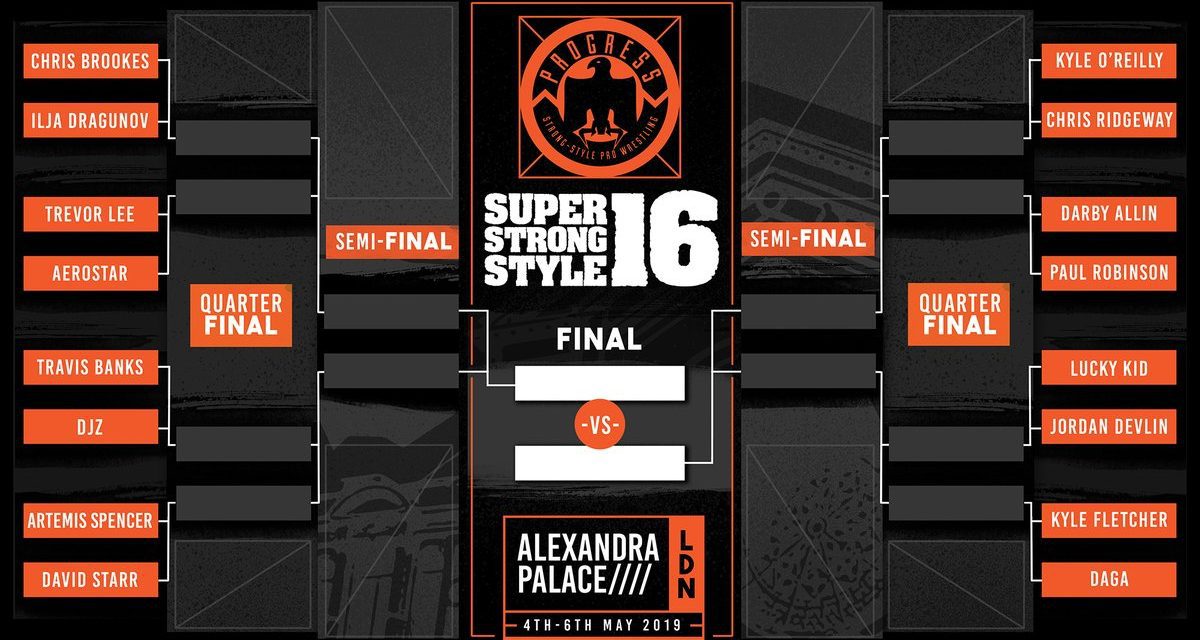 It’s May, and that means it’s time for Progress Wrestling to put on the 2019 edition of Super Strong Style 16! We’ve got titles getting unified, Progress legends saying farewell, and the little issue of crowning a Super Strong Style 16 winner. Let’s see what they have to offer this weekend.

Chris Brookes enters Super Strong Style 16, fresh off of the retirement of tag team partner Kid Lykos, looking to make some headway as a singles competitor. He surely got a tough draw with former 16 Carat Gold winner Ilja Dragunov. There was a tease of Brookes being involved in an LAX/CCK trios match, but since Brookes is in approximately 27 tag teams and stables, I wouldn’t count that match out yet. Dragunov is one of the bigger names in this tournament, and I don’t see him bowing out here.

A pair of Progress debuts here, as recent NXT signee Trevor Lee takes on Lucha Underground star…Aerostar. No pun intended there. There isn’t much to say as far as this match goes. Neither man has any history in Progress, and they’ve never wrestled before. My hope is that Trevor gets to bring his PWG act here, and just talks crap to Aerostar for five minutes before the match starts. As far as a winner, it’s a coin flip. My nickel landed on heads, so I’ll pick Trevor.

Travis Banks, who is the only returning winner of Super Strong Style 16 in the field this year, takes on recent NXT signee DJZ. DJZ beat Austin Theory to enter the tournament. This should be a good match, but I would be shocked if Banks didn’t win. He’s restarted the South Pacific Power Trip, and he’s regained some of his steam after returning from injury last year. Plus, I just love Travis. He’s great. Go Trav.

A star out of the Pacific Northwest, Artemis Spencer makes his Progress debut in Super Strong Style 16. He got one hell of a bad draw, as he takes on one of the best wrestlers in the world in David Starr. Full disclosure, I have never seen Artemis Spencer wrestle in my life. He looks like Chris Sabin though, so he can’t be that bad. Starr wins this one, in his eternal quest to embarrass himself against WALTER at every opportunity.

The Undisputed Era’s Kyle O’Reilly makes his Progress debut in Super Strong Style 16. His opponent, Chris Ridgeway, is rising up the ranks in Europe and is coming off of an impressive performance against WALTER for the Progress World Title. This one is a lot tougher than I originally thought it would be. Progress is building up Ridgeway as a home-grown guy, and they’ve built him up pretty well. But I cannot imagine them bringing in Kyle O’Reilly and having him as a body in the Wasteman Challenge on Night 3. I think O’Reilly is really gonna work hard to make Ridgeway look like a star, and I think Ridgeway can be an asset to Progress far longer than O’Reilly will be. I was going to pick Ridgeway, but as I continued writing this preview, I realized that O’Reilly was a much better fit to move on.

Former Progress Tag Team Champion Paul Robinson enters Super Strong Style 16 against new All Elite Wrestling signee Darby Allin. This should be awesome, because both of these guys are great. I’ve never seen Darby against a guy his size or smaller either, so this should be an interesting clash of styles. I’ll pick Robinson to win, because I don’t think an All Elite Wrestling guy will win in a promotion that is so closely tied to WWE.

This match-up sees two of Europe’s hottest commodities pitted against each other right off the bat. Current OTT Champion and noted WALTER killer Jordan Devlin goes up against Lucky Kid, who is fresh off beating WALTER to win wXw’s 16 Carat Gold tournament in March. This is an interesting match, as both guys are running hot right at the moment. But I’m gonna pick Jordan Devlin here, as he’s been pushed in Progress for a while now. Lucky Kid will be ok, and I think Devlin can go far here.

Progress Tag Team Champion Kyle Fletcher enters his first Super Strong Style 16 against lucha star Daga. Daga is an odd pick-up for Progress, as he’s not that big of a name outside of lucha. And I’ll be honest, I don’t know how big of a name he is in lucha either. I know he’s in Dragon Gate, but I have a hard time picturing Glen Joseph watching a Dead or Alive cage match. Gonna pick Fletcher for this one.

The winner of this match enters the Women’s Title match on Day Three. The women’s division has been centered around Jinny since its inception, and I think putting her in another title match would be the lazier choice. I’m picking Martina for this one.

This seems to be the culmination of the Do Not Resuscitate storyline, where the new guys try to take out the established stars. Think New Blood vs. Millionaire’s Club from WCW. This should be a fun, wild brawl around Alexandra Palace. I think DNR will get the win here, since Jimmy Havoc is leaving soon (more on that later). Put the new guys over and all that.

Prediction: Do Not Resuscitate

The main event of Day Two, and it’s a big one. Trent Seven laid out the challenge in March. Title for title, winner take all, World Champion WALTER vs. Atlas Champion Seven. From a booking perspective, this was the only thing to do with the Atlas Title. It’s a nice concept, and it may work in other scenes, but there just aren’t enough guys of that size in the British independent scene. As far as who wins the Unified World Title, I’d put it on WALTER. Seven is far from WALTER’s level, and that’s no knock on Seven. WALTER is just on another level, and coming off of his WWE UK Title win, I see no reason for him to lose here.

The guys no longer in the tournament end up in a scramble match to start the third day with a bang. I’ll pick Banks to win, but it doesn’t really matter.

You would be forgiven if you forgot that Jordynne Grace was Progress Women’s Champion, seeing as she’s not been in Progress since winning the title in December. Millie will be the crowd favorite, but Nina Samuels has been a pushed commodity in Progress for a while now. I would not be shocked if she got the title here. I’ll pick Nina to win.

Jimmy Havoc, having recently signed with AEW, is saying farewell to Progress here. He’s the longest reigning champion in company history and was a building block of the company. There are several options as to who he could face here, because it is a TBA. Obviously, the first name that comes to mind is Will Ospreay. The timing works out right, as SSS16 is nestled right in between New Japan tours. Will has said that the TLC match on the last Progress show was his last Progress match, but he’s said that a few times. You could also have Zack Sabre Jr come up, as those two are close. You could have Danny Garnell, who Progress historians will note is the man that helped Jimmy get into the company in storyline. I don’t know who it could be, but there’s no doubt this one will get emotional.

Yeah, I know OTT did it first in Ireland, but that doesn’t mean this wouldn’t be awesome to see. Starr could easily make people dislike him over the body of the tournament and build to a similar atmosphere that OTT got out of their crowd a few months back. I think Jordan Devlin is the only man to take the Progress Title away from WALTER, and I think that match would be a main event big enough for the Alexandra Palace show in September. 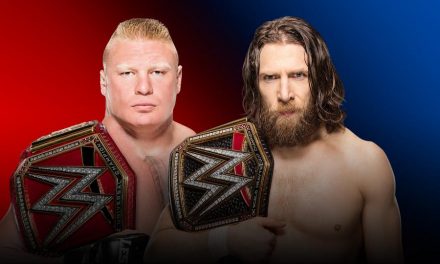 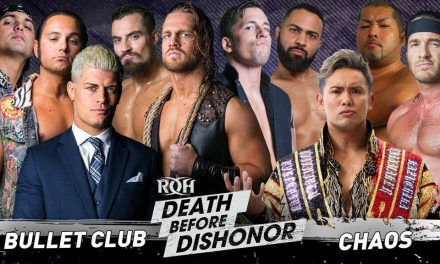