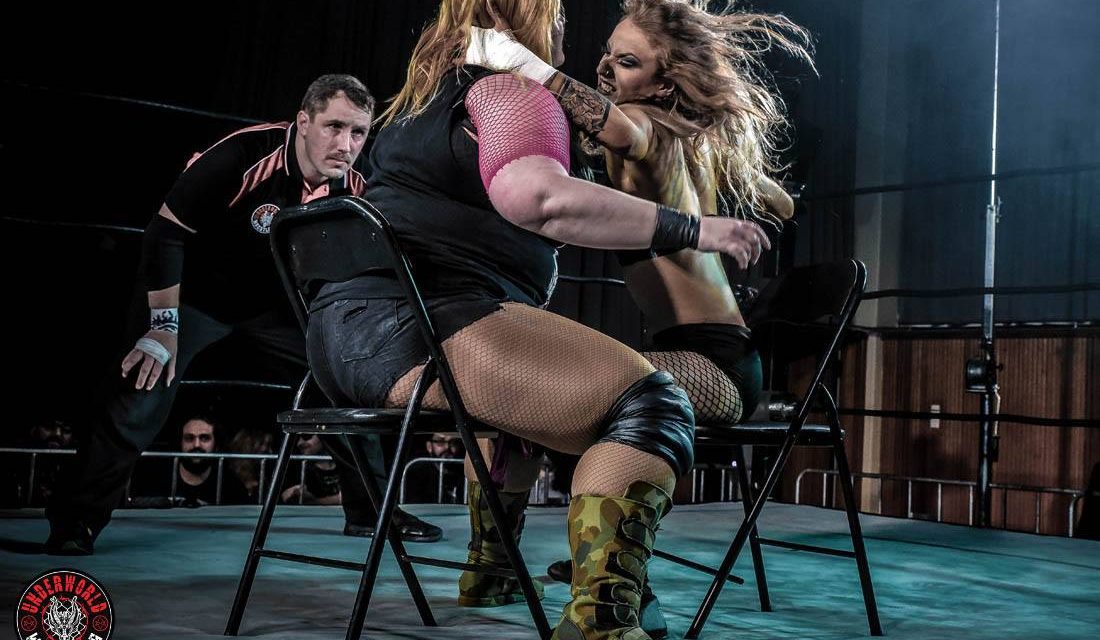 This is the third and final episode from the set of tapings that Underworld Wrestling ran in November last year. As with much of Underworld so far, the episode varies in quality (and in particular it is hurt by some odd continuity errors.) However, the main event of this episode is the best title match the promotion has put on so far.

The episode begins with Underworld Women’s Champion Vixsin accosting Underworld employee Justine at the merch desk, complaining that her challenger Avary has been ducking her. The build to the women’s title fight has just been the champion playing ‘Where’s Avary?’ for two episodes and has been one of the less inspired storylines the promotion has run so far.

After the smash-cut to the title screen, we have an interview with Underworld Men’s Champion Pitbull. Good Old Uncle Pitbull talks about how he’s friends with his next challenger Carlo Cannon, but he’s still willing to smash his mate’s face in to keep the title. Pitbull is one of the stronger promo guys on the show, and it is a pity that he’s been on the backburner since winning the championship.

Following on from Episode 4, where the former champion Carlo Cannon gained the two extra points needed to challenge for the championship he never lost. This match is coming at the start of this episode but was actually the last match taped live. The crowd seems kind of burnt out during the match and doesn’t give the match the sort of reaction you would expect for a title fight.

Apart from the mediocre crowd heat; the match is a solid brawl. Despite it being a No DQ match, there’s no use of weapons or gimmicks which could have helped get a bigger reaction from a tired crowd.

Cannon almost gets an early KO, but the champion gets back up. By five minutes in, they are trading chops. Next Carlo covers up in an attempt to get Pitbull to punch himself out. Carlo is able to dominate the majority of the rest of the match by aiming kicks and punches to the gut of Pitbull. There’s an interesting strategy being played out by Cannon for the rest of the match, but it’s also quite slow paced and not that exciting to watch.

The match ends with Carlo getting his Single Leg Boston Crab on Pitbull, but the 15-minute time limit expires meaning that the champion retains. Considering that Pitbull won the vacated belt; I would have rather seen him get the victory here to cement him as the rightful champion rather than ending on him surviving Carlo Cannon.

Post-match, Zhan Wen runs out to attack both men from behind. He gets a shot in on Carlo but is swiftly thrown out of the ring by the combined forces of challenger and champion. Carlo promises that he is going to fuck his student up in the future. Unfortunately, this storyline won’t be blown off next show as Carlo Cannon broke his leg on another promotion’s show. Hopefully, he’ll be healed up quickly, and the Carlo vs Zhan Wen storyline can be followed up on in Underworld Season 2.

Next up we have Avary finally making an appearance after two episodes of Vixsin looking for her backstage. She cuts a promo for her title fight later on in the show and is then interrupted by Lord Mark Williamson who offers her a place in his goon squad. Avary tells Williamson to “Fuck off” which delights me.

This is a match-up between two characters who have previously served as enhancement talents to introduce other wrestlers. Andy Roy is now being seconded by Mitch Waterman’s manager, Benny English.

Andy Roy gets to show off more of his offense in this match. The bare-knuckle boxer, Paddy O’Niell keeps getting chances to finish the match but Benny English keeps distracting the referee. O’Neill eventually takes the win with a diving Superman Punch off the middle rope.

This was a short match. Both competitors looked stronger than in their debuts. Based off the post-match promo, it seems like the main purpose of this was to start a feud between Benny English and O’Niell.

‘Australian Wolf’ Mason Childs is a veteran of the Australian scene who runs the Queensland Wrestling Alliance. He also has connections to Michinoku Pro. He is making his debut on Underworld TV here after having his appearance teased in past episodes.

Childs is able to get the upper-hand early, using his experience to outwrestle the bigger ‘Great Wall of China’. Zhan Wen is then able to take control using his power. Australian Wolf eventually goes for a kneebar, but Wen is able to power out and then lock in his own Single Leg Boston Crab for the submission victory. This was a solid match, that served its purpose in putting Zhan Wen over.

The strange part of the presentation of this match, however, is the commentary. Lord Andy Coyne keeps talking about how GWOC is trying to get the attention of Carlo Cannon who has a title match set for later (a title match we saw 25 minutes ago). I understand that the episodes were taped out of sequence; but in terms of continuity, it is a kind of baffling choice to put this match after the Cannon vs Pitbull match.

Next up we have Vixsin threatening to walk out of the show because she still can’t find Avary. Then Justine comes up to tell her that Avary is there and the match is next. The build for this match has been really poor; a series of vignettes that have gone nowhere. This is on top of the fact that the build has been the only representation of female competitors on the past three episodes of Underworld which is pretty weak for a group that made a big deal out of being an equality-focused promotion when they launched.

Despite how much I disliked the build for this match, I really liked the match itself. It is the best title fight that Underworld have put on so far. I have said before that I think the wrestling fan niche that Underworld serves best are fans of women’s hardcore, and this match epitomizes that.

The match begins with both women sitting on chairs, trying to psych each other out and then getting into a battle of elbow shots. They spill to the outside and brawl around the ring. Back inside we have the plunder highlights of Vixsin squashing Avary in a trash-can, Avary breaking a guitar over Vixsin’s head and multiple thumbtack spots.

The match concludes with Vixsin giving Avary the Chokebomb onto thumbtacks for the three count. Vixsin retains the title, and it is another strong performance from both women who have been two of Underworld’s highlights throughout this season.

Post-match we have a quick clip of Vixsin promising death to her next challenger and then a vignette of Justine and Simon Oath talking backstage. Justine tells Simon that Sagat Pyro retired Simon’s father; which for some reason is a surprise to Simon Oath despite it being mentioned on commentary on past episodes.

As a final teaser, as a reference to Young Frankenstein, one of Williamson’s minions screws up and puts the wrong soul into Mike E’s corpse whilst Lord Mark rants about not liking Twitter.

The highlight of this episode is the main event as both women went all out. Avary, in particular, continues to be one of Underworld’s best performers. As I said in my introduction, I found some of the editing and continuity choices in this episode a bit baffling; but the in-ring content outside the main event was generally solid. Next up will be the Season 1 finale show: Glory to The Claw. It is worth noting that the trailer for the next show stated that it would only be available on Pivotshare; so I don’t know what that will mean for anyone following the series on Amazon Prime.