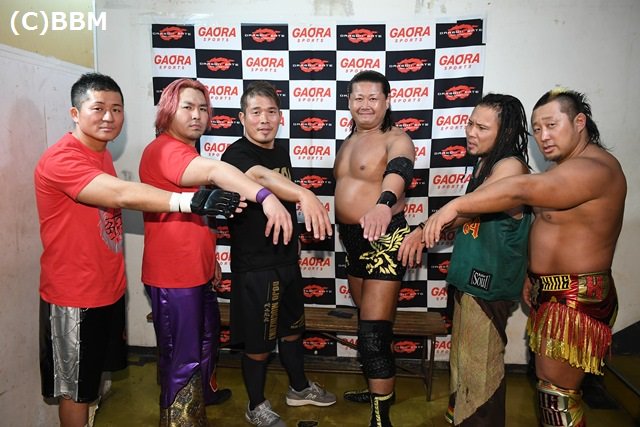 Kota Minoura still needs to have a breakout match to officially arrive within the Dragon System, but this match made it apparent that he’s not lacking the skill, but merely the opportunity. Minoura was on fire in this match, working with just about everyone on the other side efficiently.

Shun Skywalker remains incredibly over. He’s in a holding place right now on the card. He’s shown he can work main events, but he’s still being relegated to openers, partially due to his ties to the Mochizuki Dojo. I would look for that to change after Dead or Alive next month.

Minoura pinned Shachihoko BOY with a German Suplex for the win. **3/4

“Mochizuki was impressed by Hyo pinning a member of the Triangle Gate champion team. Minoura also picked up a big win in the opener. He figured this was a good time for them to follow Shun & Yoshioka and get a championship opportunity. He offered to team with them to go for the Triangle Gate. Minoura was game. Hyo had a fire lit under him by Shun & Yoshioka. He was also in. Kazma was unimpressed by the green boys. They win once in a blue moon and suddenly start throwing out challenges. They’re getting a bit too carried away. Whatever. If they want a match they can have it.”

I’m happy to see that I was right about Kazma Sakamoto. He’s not the best wrestler in the world, or really even the best big man in his own unit, but Sakamoto has worked in Dragon Gate.

This match felt oddly safe for the first half. Mochizuki watched as his leopard print pupil was beaten down by the ugliest men in the company. This almost felt like a match that didn’t belong within the company. It was an undercard All Japan match, which isn’t exactly high praise.

Once Mochizuki tagged in to make the save, things really picked up. He and Sakamoto clicked uncomfortably well, which I credit to Mochizuki being an all-time great and Sakamoto assimilating to the house style as well as he possibly can. Kanda stayed out of the way while those two and Watanabe tore it up, which ultimately ended with Watanabe trapping Kanda in the Panther Clutch pinning combo for the win. Slow start, but a very exciting finish to a good undercard match. ***1/2

Strong Machine J is the son of New Japan Pro Wrestling alumni Super Strong Machine, who officially retired last year but hasn’t wrestled a match since 2014. Strong Machine J was flanked by the mysterious masked men of Strong Machine F and Strong Machine G. I don’t want to play into this website’s history of unmasking wrestlers, but if you look at the card and look at who’s not listed, you can figure out who is under those masks.

Strong Machine J moves around the ring like he’s been wrestling for over a year. Not everything is perfectly dialed in, but his footwork has far surpassed what I expect for debut matches. Whereas the prior match started off slow and then built to a climactic closing stretch, this match stayed in the same gear the entire match, never peaking high, but also never being boring, which is incredible giving the fact that J was in so much of the match.

After double checking with a source close to the company, I can confirm that Strong Machine J is a legitimate rookie. He was so much fun to watch that I wasn’t sure if I was getting worked or not. Rookies don’t move around the ring like this. Again, it’s not like this was a MOTYC, but Strong Machine J owned the ring in this bout.

What’s most notable is that Strong Machine J picked up the pinfall with the Majin Fusha Gatame over Genki Horiguchi. In his debut match, he pinned someone that has been with the company since nearly day one. It’s clear that they have long term plans for Strong Machine J.

With this victory, Naruki Doi will go onto represent MaxiMuM in the Dead or Alive cage match next month.

This match was gimmicky in all the right ways. They honed in on the unit vs. unit interactions and nailed playing up the tension between Naruki Doi and Dragon Kid. It was very interesting seeing Yoshino and Dragon Kid play off of their familiar chemistry as opponents, then immediately seeing Yoshino and Doi play off of their familiarity as tag partners.

Towards the finishing stretch, we saw Dragon Kid throw Doi off the top rope in an attempt to gain the pinfall for himself. He set Ishida up for the Ultra Hurricanrana, hit it (although rather awkwardly), only to have Doi recover and knock him into next week with a Bakatare Sliding Kick. That ruled.

No other company does partners-at-odds tag matches as well as Dragon Gate, and quite honestly, no other company should even try, because they’re always terrible when they don’t happen within the Dragon System. ***3/4

“Yoshino was livid. This was the worst possible result for MaxiMuM. He proposed that he & Doi have a singles match to decide who will be their rep. Doi refused and they argued while Yoshino persisted. Doi flat out refused. He won the match already. He will represent MaxiMuM. Yoshino should know better than anyone. Doi suffers from a rare disease called Traitor Syndrome. It flares up every now and then. It could even flare up in Aichi. Not just DK & Yoshino, but Ishida & Jason should also make sure they are doing all they can to support his escape efforts.”

Whereas the familiarity on display in the MaxiMuM tag felt fun, the in-unit competitiveness in this match was on display through fierce aggression. Eita muscled up and took on the power of Big Ben with Yoshida by his side in a match that turned out to be better than it had any right to be.

There’s something truly special about seeing Ben-K and Takashi Yoshida, who’s splitting time between Dragon Gate and All Japan for their Champion Carnival tournament, start at opposite ends of the Korakuen Hall bleachers and then charge at one another full speed. What a dumb, yet glorious spot that helped pull me into a match that I wasn’t that excited about at the start.

Ben-K was the star of this match. He’s three years deep now and is starting to put in some of his most impressive work yet. The fact that he’s as big as he is, as experienced as he is, and works as much as he does and is showing no signs of wear and tear is remarkable. I’ve used this word to describe his offense before, but Ben-K was just so explosive in this match. We learned at the start of last year that he and Eita have great chemistry, and we saw more of that on display here.

Yoshida and Eita have made it clear that they want Shimizu out of R.E.D. and while they did their damndest to beat him down in this match, Shimizu, for once in his life, used his brains and countered Eita’s roll-up counter to the Shot-Put Slam with a pin of his own. Shimizu now enters the cage representing R.E.D. ****

“Backstage, Big Ben were confronted by YAMATO & KAI who challenged them to a Twin Gate title match. Shimizu was riding the wave right now so he accepted. This was later set for April 28th in Hakata.”

Despite the lengthy match title that this match had attached to it, that match precisely nailed the Aagon Iisou style of match. There was a little bit of comedy, a little bit of aggression, and some top tier action all in one match. The company’s in-ring style has shifted dramatically over the last 15 years, and this match felt like it was straight out of 2004, just with some fresher faces.

I was hooked from the opening bell when YAMATO and Shuji Kondo looked giddy squaring off from one another. This felt like a match that YAMATO had a lot of control in because it played to his strengths. I forget that he’s such an incredibly well-rounded performer, but I think that’s in part to the fact that he forgets it every so often. YAMATO can do it all in the ring, but when he’s working as a face, particularly his time with the Tribe Vanguard unit, we only see slivers of what he’s capable of. This was YAMATO having fun and working hard, and we hardly ever see both.

Shogo “Jet” Takagi was the big surprise in this match. He rejoined his Aagon stablemates and got a thunderous pop in the process. He stayed out of the way minus a few well-done comedy spots, which is all I could ask for. Much like last month, there was far too much Sugawara for my liking, but at least this time he had Kondo and YASSHI behind him to do the heavy lifting.

I can’t call this a great match, but I really enjoyed it. Having Aagon back like this for one night was really unique and seeing Yosuke Santa Maria back in the fold is a great thing. Even though this match was booked to highlight the Aagon nostalgia, there was a moment where the camera panned to Tribe Vanguard, all of whom were wearing matching gear, and for the first time in a very long time, they felt like an actual unit. I look forward to seeing how they progress throughout the summer.

YAMATO scored the fall with the Almighty Frankensteiner. ***3/4

“Masato Yoshino made an awkward appearance at this point…The people were probably wondering why he came out here at this time on his own. Dragon Gate is celebrating their 20th anniversary this year with various special matches here in Korakuen Hall. Of course, the celebration will peak in July at Kobe World Kinen Hall. There is a particular wrestler Yoshino wants to have appear on that show. That wrestler is Ultimo Dragon. Without him, Dragon Gate would not exist. But, this is easier said than done. 15 years ago, Toryumon became Dragon Gate and they went their separate ways from Ultimo Dragon. Since then, he hasn’t seen or spoken with the man. He has no way to get in touch with him. So, he was going to use this useful platform of live streaming & television & mass media to send his message. He doesn’t use social media himself, but surely the message will also make it’s way there. He has faith that it will reach Ultimo Dragon. His message is simple. “Ultimo Dragon, please come to Dragon Gate!”. They come to Korakuen Hall every month. The date for next month is May 9th. He will be waiting for Ultimo Dragon to come. He passed back to YAMATO, who gave a quick plea for Yoshino to get on social media.”

Gate of Passion was the perfect table-setter for what’s to come in May. Dragon Gate is in the midst of gearing up for their first big PPV of the year, Dead or Alive, and King of Gate, which is their G1 Climax-equivalent. I can’t help but feel excited after the effort that Dragon Gate put forth in this match.

The steel cage decision matches from R.E.D. and MaxiMuM delivered in a big way, the main event had a fun, retro vibe to it, and the debut of Strong Machine J was an incredibly exciting glimpse of the future. Thumbs up for Gate of Passion. 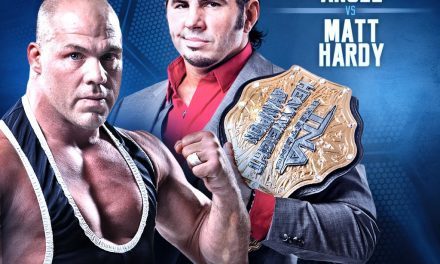 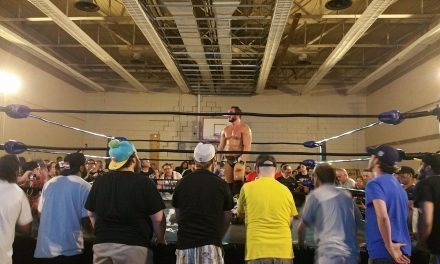 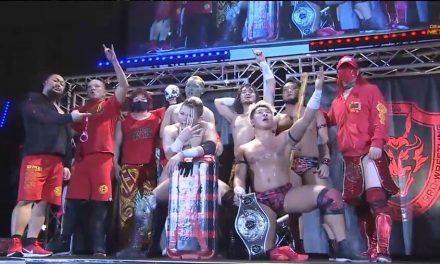