This week on Wrestling Omakase it’s a special bonus episode breaking down the last two big shows of Mania weekend! John is joined by returning guest and Music of the Mat host Andrew Rich as we start with a brief recap of Andrew’s Mania weekend, including his full ranking of everything he attended and thoughts on the VOW podcast network karaoke crossover with the two of us and Super J Cast co-hosts Damon & Joel.

Once that’s out of the way we turn our attention to a full breakdown of the huge G1 Supercard show from MSG, as we break everything down match-by-match. Some nice things are said about the NJPW side and some, uh, very not-so-nice things are said about the ROH half of the card. We then do a more brief review of WrestleMania, with both John and Andrew giving their very takes on a pretty good but mostly unmemorable (and of course, incredibly long) show.

Finally we wrap things up with a packed mailbag featuring everything from people just straight up asking us both for money to thoughts on Pinano Pipipipi’s retirement, Hikaru Shida signing with AEW, what the general hell is going on with ROH and more! It’s a packed bonus edition of Omakase! 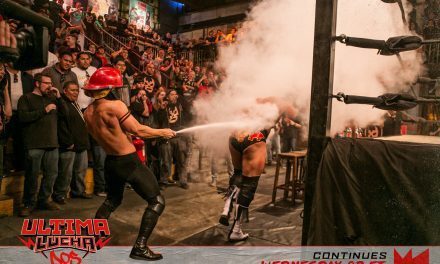 Ultima Lucha Of The Hidden Temple (Dos), Part One: A Night Where Falls Count Anywhere