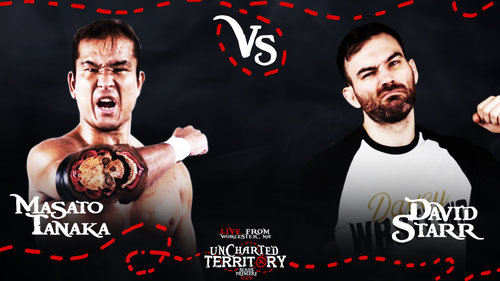 It’s pretty fuckin’ cool for a independent promotion (even a more well known one like Beyond) to try their hand once again at a weekly “television” show, now that there are subscription services and platforms apart from just YouTube. I know companies like wXw have been doing weekly TV for years, and Beyond has tried before I believe, but this could be the one that sticks—and I hope it does, I’d love to have a weekly show to watch.

Episode 1 of Uncharted Territory benefitted a bit from having talent that is in town for WrestleMania weekend only a few hours away from NYC. With this, you have big time international names like Masato Tanaka, Aussie Open and more involved. But even with a bit of a “supercard” feel, Beyond did a good job throughout the show to present a show that felt more akin to an old studio-based, territory show—pushing angles above huge spots. The show was entertaining on the whole, and while it might not have reached the highs that I was hoping for, it nevertheless has me hooked (nautical theme pun intended).

I don’t give ratings to matches unless I consider them 3.5 stars and above, for what it’s worth.

I’m a big fan of all six of these guys in the ring, where I think SCU consistently delivers (despite not giving a shit about their promos & Elite stuff). Pazuzu features one of my favorite indie guys in the world in Dickinson, a real scary mother fucker who takes it to everyone he stands across from (and is facing previously mentioned Masato Tanaka later on this weekend in perhaps my most anticipated match of WrestleMania weekend). Pazuzu also features Santana & Ortiz of LAX/EYFBO, a top 3 tag team in the world for me, who have had a particularly strong 2019.

First things to notice is how small the Electric Haze is, a small bar that literally just sits right on the street here in Worcester and a ring that even my 5’8” frame could lay across (not true). The crowd is RIGHT there against the ring in classic Beyond fashion, with a brick wall on one side, so I guess we can’t expect too many dives to the outside. Kazarian’s nickname is “The Heavy Metal Rebel” which makes me want to vomit. The crowd is super into EYFBO, one of the longer-running tag teams of Beyond. At one point, Ortiz catches Scorpio during an attempted monkey flip and throws him up into a pop-up facebuster for a huge pop (before getting kicked in the face). Another good spot is Kazarian fuckin’ up his kip up and recovering like a champ.

The match devolves into a bit of madness, forgoing tags as you would expect for a lot of back and forth exchanges and big moves for a few minutes—almost everyone gets their shit in, though for the 6 dudes involved, it is sort of done at half speed. Eventually, David Starr does a surprise run-in, knocking Dickinson off the turnbuckle and distracting LAX before SCU can sneak in the win. Overall a good, entertaining opener—but not the high point of any of these guys’ year, nor likely their coming weekend. SCU gives respect to EYFBO/LAX at the end of the match.

I can’t pretend that I’m particularly fond of either of these wrestlers in the ring, though like a lot of people, I believe that MJF is one of the best heel characters in the indies in years, which is perfectly on display here. He cuts Kimber down, the crowd gives him shit, he says she has nothing on Kris Stadtlander, that he’s genetically superior, all the classic heel shit. Kimber, for her part, actually looked pretty good here, delivering solid kicks, head-scissors and a few german suplexes as well. It’s mostly about the devious heel work of MJF throughout, taking advantage of the ref and eventually using him as a shield before getting a sneaky win with his slingshot piledriver. Honestly, I expected the worst and really this was a perfectly serviceable 5-minute match that moved the show along—I liked it!

The Beaver Boys won last November’s “Tournament for Tomorrow” to crown themselves the best tag team in Beyond, male or female, and have come out here to issue an open challenge. Though they were set to make their debut on episode 2 next week against Sadkampf, Aussie Open surprised the crowd by answering the challenge. I’ve seen a few Aussie Open matches, and some solo matches from each guy and they’re definitely one of the better tag teams going right now. Fletcher and Reynolds feel each other out for a minute or two before Fletcher gets in control with a surprise springboard moonsault to a standing Reynolds. John Silver and Mark Davis tag in and while the “Meat Man” talks shit, Mark Davis laughs. Honestly, I love John Silver. Silver eats a couple of chops from Davis as Reynolds keeps ducking, Silver holds him up and Reynolds gets the chop. Silver runs in mid-exchange and powerbombs Fletcher onto Reynolds knees. Silver is acting tough, the announcers are real jokes.

Mark Davis is super fuckin’ over with his strength here, would love to just see an extended match with him and Silver in a later episode. Reynolds is working over Fletcher and Davis gets in suddenly stopping him in his tracks and delivering a double team benadryller, followed by an assisted ace crusher, which was pretty sick. Silver with a big corner basement drop kick. Silver & Reynolds with a double team powerbomb/leg lariat. Both guys taking it to Davis, and then a great set of combinations to Fletcher, but aren’t able to put him away. Crowd likes Aussie Open. Davis hits his one armed powerbomb on Silver while holding a wristlock on Reynolds, and some sloppy exchanges put Aussie on top. Some great back and forth exchanges that remind me of old PWG DDT4 matches, but a little slower—neither of these teams are giving their ALL, but still showed up. The Beaver Boys get the win here, but I’m excited to see Aussie Open down the road here in Beyond. 3.5 stars

This is a part of the inaugural “Discovery Gauntlet” series in which each week on this show, someone who hasn’t been on Beyond will wrestle; if they win, they move on to the following week’s show. Skye is an undersized kid in good shape and worked the last Beyond show’s opening match to earn this spot. Mick Moretti is a real weirdo that works primarily in PWA Black Label in Australia, recently shaved his head (having the most insane Dragon Ball Z hair prior) and is a totally unique stud in the ring (think if Jason Kincaid was a power wrestler instead of a high flyer). This match was fine, nothing blow away and the timing was a bit off, but there were some really solid moments as well. Skye is very obviously green, but I don’t imagine this being the last time we see him somewhere like Beyond. Moretti does a lot of head-based offense, including doing headstands. Highlights include a sick, springboard tornado ddt from Skye and whatever the hell Moretti’s pumphandle, flipping cutter finisher is. Moretti moves on, so we will see him next week.

Both of these folks have had way better matches in recent weeks than this one showed. This one seemed worked in slow motion, not even “going through the motions” and was just overall very odd. There were some cool moments here and there, Kris defending a bulldog by holding the ropes and her general overness with the crowd, AR Fox going coast to coast and kicking Kris off the outside of the apron in a very low ceilinged building. Kris is the most pushed wrestler in Beyond right now, winning the Treasure Hunt and much more, and AR Fox is a Beyond wrestling legend, but this match really served mostly to just get over the angle at the end of the match in which Kimber Lee, one of her partners and the ultimate female babyface in Beyond, turned on Kris— Lee was likely jealous of being overshadowed in recent months. We shall see how that goes. I like that as a weekly television show they are focusing on stories, but this match was disappointing.

Grace and Cassidy, two of Beyond’s big time stars unveiled very appropriate mystery partners for this match. Unfortunately, with the clash of styles (Power Vs. Comedy), the match never really came together in a cohesive way. Cassidy is on a role, truly, and in the last year has really become one of the biggest names in indie wrestling, and while he’s having “ok” matches more often than “great,” he IS having great matches here and there. Grace and Cage, you know what to expect, any night of the week they can have a 4 star match, but they can also coast. Martina is…not for me, but she is definitely committed to the gimmick. Anyway, this match didn’t really do anything for me, but Cassidy was the clear star, working most of the match with his hands in his pockets as usual. Sounds messed up, but my favorite spot in the match came after Grace pinned Cassidy and Martina rushed in to check on him, covered & hugged him and Cassidy kicked out as if getting pinned. The crowd enjoyed it, but it was just filler tonight.

Sad to say that this match was a bit disappointing considering it was only about 3 years ago where I was making the case to anyone who would listen to that Masato Tanaka was still a top 10 wrestler in the world AND with the fact that David Starr has has back-to-back years with that billing but this was a bit disappointing. Don’t get me wrong, it was hard hitting, but Tanaka has finally aged in the last year or so, he moves a lot more stiff in the ring and seems to be in pain, but his strikes are still solid. Starr in Beyond is one of the best heel characters around (as just about every character Starr plays in every promotion can claim), and his shithead tactics were the story in this match. I came in hoping to have a MOTYC here, on a debut weekly show for a promotion I like with two wrestlers I love and adore, but this was just good. It was still probably the highlight of the show and ended with a returning Joey Janela distracting Starr, allowing Tanaka to absolutely fuckin’ whallop him with a chair to the dome and then hit the best move in wrestling: The Sliding D. 3.5 stars

It’s good to see Joey back, to see a indie show with some building angles and to be entertained for the entirety of a show. There was nothing absolutely blow away here, but it works as an introduction to the promotion and has hooked me enough to bring me back next week.

Check it out, there are tons of free promo codes to watch on Independentwrestling.tv, so you don’t really have a reason not to. 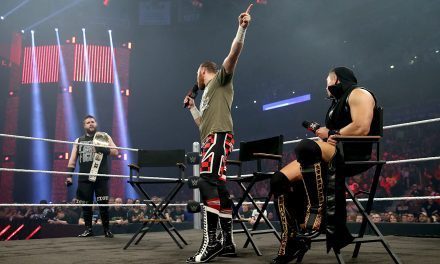