On paper, this is one of the most loaded Korakuen lineups Stardom has run in a long time. It will be interesting to see if it lives up to the expectations

This served as a few different masters. Nao got to get involved as this was her last Stardom appearance before she sets off to travel, the interactions between the different factions were also fun to see. Little moments like The rookies teaming up to take out the experienced competitors, Rina and Hina teaming up to eliminate Hanan and other little moments of character work were enjoyable. In a surprise, Iida got the win by pinning Natsu after Nao accidentally hit Natsu with the Ax Bomber. **1/2

It’s a Stardom multi-person tag match, we all know what we’re getting from them.  There was a story built around everyone being afraid of  Viper but that’s the only story we got as this one was nonstop action. Water is wet, Queen’s Quest beat Stardom, This was very good.  ***1/2

Someone thought it would be a good idea for Kel to control most of this match, that was a very bad idea.  It sometimes feels like she’s wrestling in slow motion and when you’re in there with one of Stardom’s better workers that will expose you.  Utami eventually got in a little offense and won but this should’ve gone very differently **

Hazuki has set a high bar for her High Speed defenses and this one probably didn’t clear the bar but it came damn close.  A bit of one-upsmanship and some cool spots but mostly a high paced wrestling match that picked everything back up after the SWA title match ***

Tora used her power to wear down Mayu after targeting the knee in the early going of the match. This didn’t dissuade Mayu from hitting some lethal kicks. Both women tried to make us believe Tora could take the title but with the MSG match already made it was almost guaranteed we would get Mayu retaining.  Despite that little caveat, this was a very fun match. ***3/4

David vs Goliath in this one as Kagetsu was forced to overcome the new monster in Stardom. Kong moves well and her period of dominance wasn’t too bad but it was once Kagetsu came back that this got going. Wiley veteran Kagetsu managed to spray mist at Kong twice as she used her brain to beat brawn.  My favorite part of the match was Kagetsu firing up and hitting three 450 Splashes back to back to finish the match and make sure she had put Kong away.  Kagetsu looked really good with the win here and has some momentum on her side again. ***

This was Andras’ first singles match in Stardom and they threw her in right at the deep end. She has been impressive since her debut in multi-man tags but wasn’t as good here.  This was probably the weakest match of Momo’s insanely good run thanks to Andras slowing the pace a few times when instead she should’ve been building up to the closing stretch.  That stretch was great as they both threw some bombs at each other but wasn’t enough to make up for the slow middle part of the match.  ***1/2

I went into this show with really high hopes that I don’t think were met.  The WOH match was the best of the night as the SWA, World, and Wonder title matches slightly underdelivered. Regardless of that Momo challenged Utami Hayashishita as her next White Belt challenger and that’s the hottest match Stardom has right now so it’s time to get excited for that match and the upcoming Stardom Draft. 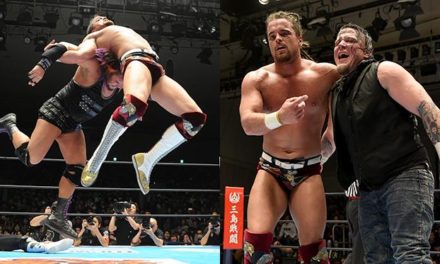