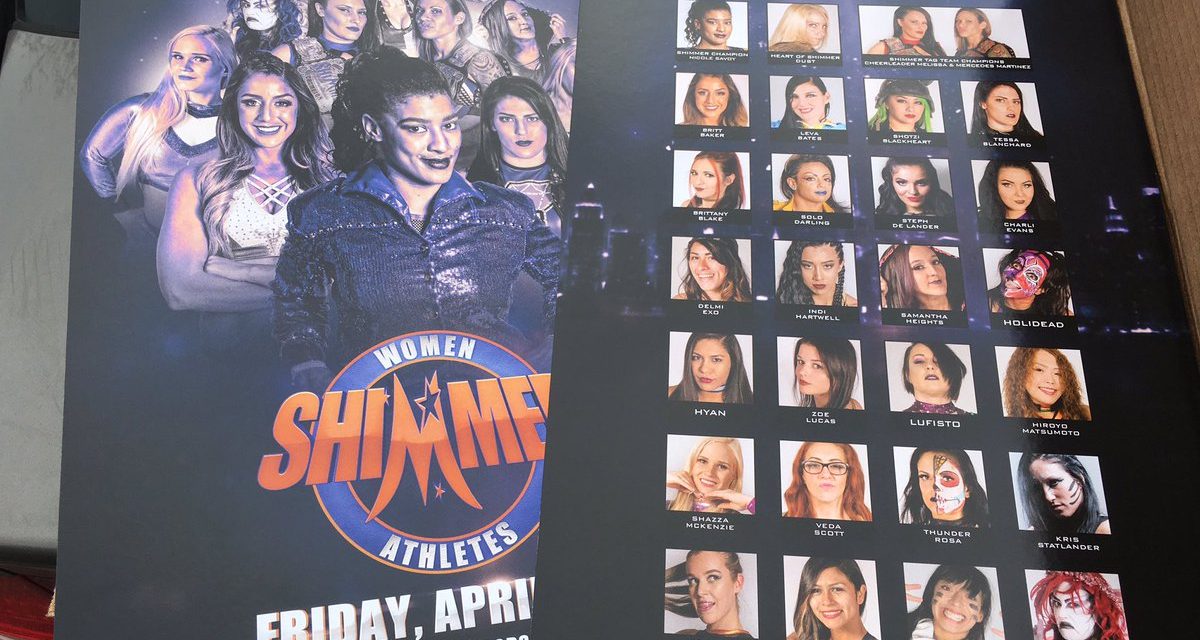 I was patiently waiting to do this preview as while I had no doubt SHIMMER would deliver a great line-up, they did not announce a card until Monday as they had several events last weekend and did not want to spoil their own results. Unfortunately, SHIMMER had two announced injuries over the weekend, with Mercedes Martinez and Charlie Morgan both suffering injuries serious enough to keep them off the event in New York (assuming they were going to have matches). Everyone else seemed to have come out relatively unscathed though, and with a partial card announcement finally made, let’s take a look at the show!

Dust won the Heart of SHIMMER Championship way back in April of 2018, with this being her 8th defense of the title. These two just wrestled last weekend but due to SHENANIGANS we are getting an immediate re-match, this time with Rosemary banned from ringside since she helps Dust too much. In fact, Rosemary is banned from the building which I believe makes it a 100% chance that Rosemary will, in fact, be in the building. This will be the third time Heights has challenged Dust for the title so it’s now or never, if she doesn’t win here I wouldn’t expect her to get another shot anytime soon. I don’t know much about Heights but Dust is solid, with all the craziness that will likely be going on at ringside this should be a fun match.

One of unfortunate aspects of there being 3,409 wrestling shows this weekend is matches like this may fall through the cracks, which is a real shame as it will be a banger. Nicole Savoy is one of the top female wrestlers still on the indie scene (and better than most not on the indie scene), and Hiroyo Matsumoto is one of the top female wrestlers in Japan. They’ve only met once before but it was back in 2015, and Savoy has grown so much as a wrestler since then. Matsumoto has been wrestling in SHIMMER off and on since 2010 and is familiar to fans, but this title match popping up was quite a surprise since she wasn’t even confirmed yet for New York. Don’t sleep on this match, it could easily end up being one of the best matches from WrestleMania Weekend if they are given the time to put on a show, easily the “must see” match on this event for me.

AEW and Impact Wrestling collide! If you asked me a few years ago what I thought of Tessa Blanchard I’d have given a hearty “meh” but she changed my mind during her Stardom tour in 2017 and from her recent work in Impact. She has noticeably improved each time I see her and at only 23 years old she’ll just keep getting better. These two briefly feuded over the SHIMMER Tag Titles in 2017 and have recently had numerous singles matches in a variety of promotions, so the chemistry should be there even if they don’t have a compelling current storyline.

Fresh off murdering someone on semi-national television, Sü Yüng is traveling to New York to take on the Aussie Shazza McKenzie. I love Sü Yüng’s character, I’ve always been a fan of supernatural crazy people that spray mist, it’s one of my wrestling weaknesses. Shazza McKenzie challenged Nicole Savoy last weekend for the SHIMMER Championship and lost, so she is looking to rebound here with a win over the Ündead Bride. Any match with Sü Yüng is going to be a spectacle, I wouldn’t go into it expecting a five-star classic but for a change of pace and pure entertainment value, it should hit the mark.

I don’t want to ignore seven of the wrestlers in this match, but I’m going to anyway as this match is all about Kris Wolf. As most fans of women’s wrestling know at this point, due to health issues, Kris Wolf is retiring at the end of the month so this will be one of her last wrestling matches. Kris Wolf is not only a delight in the ring but is a national treasure as a person, always giving fans the best experience and biting children whenever the opportunity is provided. She is in a large match like this to protect her head on her way out, but she still is going to steal the show one way or the other, even if everyone else on the card doesn’t know it yet.

I am very familiar with the Twisted Sisters as they have wrestled in Stardom in the past, they are an entertaining act and I am glad to see they are still teaming together as they play off each other well. This is Thunder Rosa and Holidead’s first run in SHIMMER (they wrestled last weekend in their promotional debut), and wrestlers tend to wrestle to impress when some fans are meeting them for the first time. They are against two Aussies that are a bit lesser known in the States, I haven’t seen either wrestle before but I’m going in with an open mind and hoping to be impressed. Likely a match designed to put over The Twisted Sisters, but should still be fun to watch.

Note that there are additional wrestlers announced as appearing, including Cheerleader Melissa, Shotzi Blackheart, LuFisto, Kris Statlander, Leva Bates, “The Renaissance Woman” Hyan, Brittany Blake, and the legendary Veda Scott. LuFisto is retiring soon so hopefully, they give her a good match as a WrestleMania Weekend send off.

Top to bottom, the matches announced so far give this event a real chance of sticking out this weekend, as it offers something unique and they went all-out getting the top female wrestlers available with wrestlers from Lucha Underground, Impact, AEW, Japan, England, and Australia. Look for my review of the event either here on Voices of Wrestling or my website Joshi City on Thursday as I’ll be watching live from the comfort of my own home for what should be one of the top events of WrestleMania Weekend.