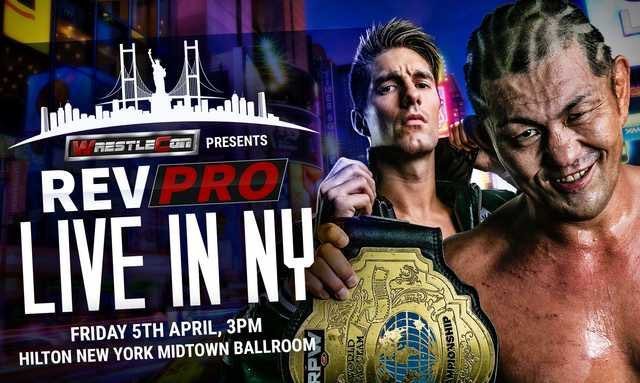 Rev Pro is going through an identity crisis and, like many of the companies ready to invade New York, their place is perhaps the most confusing. In the litany of companies competing for vital attention and ticket sales, I’m worried how they will differentiate themselves in the midst of such a crowded schedule. It seems like it will be far too easy to fall back on their ‘just book New Japan talent’ cycle.

That’s exactly what they have done. While there have been plenty of changes to RevPro UK’s Live in NYC due to PAC’s visa issues, they may have actually ended up improving this show and making it much more interesting for the travelling fan.

There are many shows that will fall victim to a lack of PAC this weekend, but for me, the errant visa issues have made this headliner more interesting. The Ospreay/PAC story, especially with CCK in the mix, is something that I would be keen to avoid and while this lacks any kind of storyline impetus, that is undoubtedly a good thing here.

One of the criticisms that I have made of RevPro is there maniacal obsession with telling convoluted, messy stories. Wrestling is much like pizza – restrict yourself to one or two great toppings and you have the food of the gods. Once the overindulgent silliness begins, you are left with a sloppy mess.

That’s exactly what the Ospreay/PAC debacle was. Sloppy. There were multiple moments in their match that were unexplainable from any perspective other than “it’s wrestling.”  Heels trying to get DQed, run ins two thirds of the way through a match and wrestlers refusing to pin a prone opponent are all paints that a good booker can use, but using them as flippantly and recklessly as they were used by Quildan led to disaster.

RevPro needed to take this as an opportunity to allow the simple ingredients they have to sing. The tweet that announced the original match asked the horrendous “can they co-exist?” question. That story could take a prominent place in my wrestling Room 101 and I’m glad it is no longer on the cards.

Brookes being out of the top spot is a good thing as he has never proved he can handle that kind of positioning. They’ve also added three of the greatest wrestlers of today, if not of all time. This will undoubtedly be an incredible match and worth anyone’s time.

Aussie Open are the top contenders for the RevPro tag titles, so it will be interesting to see who takes the fall. As I typed that sentence, I was angry with myself because it’s the kind of horrendous thing a wrestling critic says when they have almost nothing to say about a match.

I have almost nothing to say about this match.

David Starr is perhaps the greatest independent wrestler on the European scene. Everywhere he goes, whether heel or face, he squeezes every last ounce of emotion and story out of whatever he is given. He is a savant, identifying the core of human emotion in his stories and delivers the best, most identifiable promos imaginable. Ishii, the working every-man of professional wrestling, is a gift of an opponent for anyone, but especially Starr.

Starr and Ishii had wonderful chemistry at the Uprising event earlier in the year. They made me forget my frustrations about pausing the ELP/Starr rivalry by crafting a unique, real story infused with some excellent ‘Flair For The Gold’ esque promos throughout the show. It was interesting to see Ishii working from a dominant position and the quality of the workers was evident throughout. There’s nothing I can say to the travelling wrestling fan to justify excitement in this match. It will undoubtedly be excellent.

I really hope Taguchi does his bum spot. Do you think he will?

This will be a fun match for the live audience. There’s enough on this show to excite the audience already and this will be an interesting amuse bouche.

I waxed lyrical on the audio preview that companies need to bring a sense of a different wrestling culture to the expo of wrestling. Rev Pro weren’t doing that before, but their hands have been forced. This has ended up being an interesting looking show, rescued by their New Japan connection.

There are still no titles, and still no women so it’s far from perfect. It will, however, be a blast for the live audience.