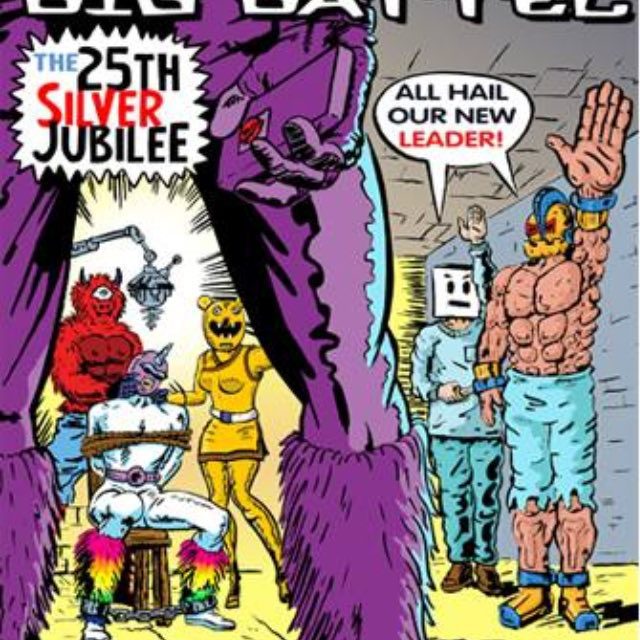 When I officially made the decision to attend this year’s WrestleMania Weekend (my very first ever), there were two shows I made certain I had tickets to ROH/NJPW G1 Supercard and Kaiju Big Battel’s The 25th Silver Jubilee.

There’s an ocean in wrestling philosophies between those two shows. One has the chance to feature four or more incredible match of the weekend-level hard-hitting matches and the other is a bunch of people in cushioned costumes having staged monster fights in a mini city contained within a wrestling ring.

Shows like Kaiju Big Battel’s The 25th Silver Jubilee—a show so unique and so different from anything else happening that weekend—is why I wanted to make the trek to New York City for the weekend.

There are likely people reading this who have never seen or heard of Kaiju Big Battel so I’ll make this as quick and easy as I can. Kaiju Big Battel is a parody of pro wrestling and classic Japanese kaiju films (think the original Godzilla). The battles are performed in a pro wrestling ring with various costumed performers playing the roles of monsters. A typical Kaiju Big Battel event blends the worlds of pro wrestling, comic books and Japanese pop culture into a wild, fever dream-inducing show typically reserved for late nights. The show is probably best appreciated with the aid of well… something.

The most prominent and consistent character in the Kaiju Big Battel universe is the main villain: Dr. Cube. A disfigured plastic surgeon, Dr. Cube wear wears a giant cube over his face to hide his hideous scars. Other prominent characters include French Toast (a giant waffle with a French accent), Kung-Fu Chicken Noodle (a martial artist wearing a can of soap), Los Plantanos (plantain luchadors) and D.W. Cycloptopuss III (sea monster) just to name a few. It’s madness.


Trying to predict what’s going to happen at Kaiju Big Battel’s The 25th Silver Jubilee would be impossible. There are no matches announced and let’s be honest, it wouldn’t matter. You don’t buy tickets to Kaiju Big Battel expecting anything. You sit in your seat and let them take you on an adventure. It’s one of the most unique WrestleMania Weekend experiences you can have.

In past years it’s been a past time of mine to predict which prominent indie wrestlers are under the costumes. I’m probably correct about 1% of the time but it’s fun nonetheless. This year, Kaiju Big Battel is running in the same building and after the DDT Coming to America show so I’m expecting some crossover.

For those who want a guaranteed crossover between Kaiju Big Battel and DDT should look for the MoreThanMania.com/WWN Live Experience Wrap-Up on Saturday which will feature several DDT vs. Kaiju Big Battel matches.

For The 25th Silver Jubilee though, I’ll sit back, relax, possibly enjoy a drink or two and have a blast at my very first live Kaiju Big Battel show.