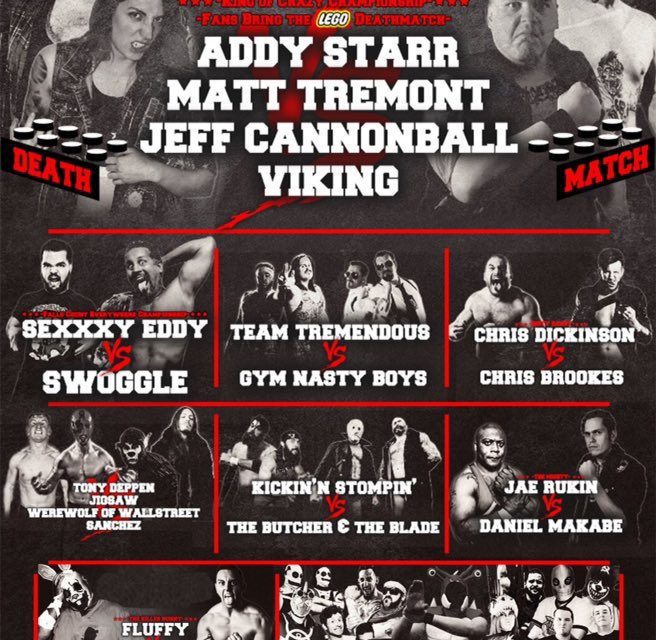 For those who aren’t in the know—Inter Species Wrestling is a small, half-comedy, half-hardcore promotion working out of Quebec & Connecticut, that doesn’t seem to really run very often. I’ve seen part of a show on IndependentWrestling.TV, but I’d be lying if I pretended to know much about it (if there is much to know). There are a handful of cool names involved in this show, surely their biggest show ever—so if you want to just post up at the White Eagle Hall in Jersey City on Thursday (IWTV: Family Reunion, Bloodsport, this & AIW), well here is a quick preview.

Note: The Inter Species YouTube page has run a handful of promo packages for this show that makes it a bit easier to find out about who these people are that are involved.

Sounds like “Food Fight” matches are a bit of a regular thing with ISW, which—hey, that’s not the worst silly gimmick ever, especially with people who have gimmicks as Crash Test Dummies, Turtles, Dinosaur Lady’s and Killer Crabs. Based on the promo video for this, I’m all in on Boris, a masked Russian bear-like creature. Whatever, this will be ridiculous, so if you aren’t at Kaiju, this could be the next closest thing.

This should be a totally competent, enjoyable match and likely pretty brutal. I was unfamiliar with the Sullivan brothers prior to this but watched a few matches on YouTube taking place up in Nova Scotia and I kinda dig them! They’re a French-Canadian-analogue to Jay & Mark Briscoe, they wear Carhartt-esque overalls, look crazed and move around the ring pretty well. I have no idea how long they’ve been working, but I could see them getting more work around the NE American indies. Braxton Sutter/Pepper Parks is a dude who I’ve never really been a fan of, even though he has a very good look and I’ve seen him have some pretty good matches—but working with Andy Williams of Every Time I Die, who is a fuckin’ GIANT is a cool development over the last year or so. Andy is green, has been wrestling here and there for just about 2 years, and is a bit older than most people who get into wrestling, but I fuckin’ dig huge, tattooed hosses in the ring and he carries himself like a scary MF. This match will probably be frenzied and should be pretty good!

This one isn’t for me. Fluffy the Killer Bunny is exactly what you think they are—a hardcore-ish monster movie killer with a scary bunny mask. LSG was kicking around CZW and other indies for a while but I haven’t seen him in forever, and can’t really remember much about him. Would love to be surprised here, but not putting a ton into this one.

Jae Rukin in this slightly undersized brick shithouse of a dude from Ontario, who goes by “The Mighty” and ISW announcers once put over as “The Canadian Minoru Suzuki”—now I don’t know what that means, but he works stiff and throws some dope suplexes. Daniel Makabe also throws pretty dope suplexes, but mostly works on the mat, trying to submit people. It’s no secret that Makabe is one of my (and many other’s) favorite indie wrestlers in the world right now and he’s breaking out little by little, but this match with the lesser known (in our circles) Rukin could prove to be a fun undercard match. Don’t expect the same grounded, technical game as Makabe will battle with Fred Yehi or his Timothy Thatcher matches from the past couple of years, but this could be a nice little brawl.

I hope this is worked as a scramble, rather than a four-way with tags, because that could truly make or break it for me. Jigsaw is one of the best scramble/multi-man workers of the past decade or so—always able to get his shit in, and though he’s not as prevalent on the indie scene as he once was, he still pulls out a couple of great matches each year. Deppen is one of my very favorite young wrestlers, a dude who busts his ass on every show and beats people up in the ol’ Biff Busick way. Sanchez is the former Pinkie Sanchez and has worked everywhere and is almost always a good time. The Wolfman is funny, which worries me for a match with good workers, but could provide some needed levity. Anyway, hoping Deppen goes over and does crazy shit here but who knows.

Yo, this match should be fuckin’ dope. Brookes can work with anyone and Dickinson can beat the shit out of anyone. Two wrestling nerds with very different looks and very different styles—one of my most anticipated random matches of the whole weekend.

This one will probably be worked mostly as comedy, despite the fact that all four guys are pretty good (occasionally great) workers. It’s being billed as “Cops Vs. Robbers” which is pretty genius booking to me. If you’re unfamiliar, Bill Carr & Dan Barry used to be one of the major US indie tag teams with their 80s pastiche buddy cop act. The GNB are two dudes who have disgusting heel gimmicks that they pull off better than just about anyone on the indies anywhere. Expect some big spots, some insane dives, maybe a table or two, a lot of shit talking and the announcers putting the match over like crazy. This should be one of those matches we all enjoy a lot, doesn’t make your “year-end list” or anything, but has at least SOMETHING memorable.

Of the 500 Swoggle matches this weekend, this one is the least offensive. Sexxxy Eddy is kind of one of the more consistent, bigger deals within ISW and he plays his sex-crazed dirtbag character perfectly. Swoggle is Hornswoggle and I don’t have time for his shit anymore. I’ll watch this, but I can’t imagine liking it.

Addy Starr is an insane woman that isn’t afraid to bleed. Jeff Cannonball and Matt Tremont bleed more than they don’t and Nick Gage is…the king. Gage got added to this match recently, which I actually didn’t realize, but am super stoked about it. I’m not the biggest fan of any of these four people, but I enjoy them here and there and with the gimmick involving PLASTIC BUILDING BLOCKS rather than the truly twisted Death Match stuff I usually see them in should keep things pretty fun, but we will see just how far they go. Regardless, it makes sense as the main event and would main most indies in NA.

Sound good? Post up at the White Eagle, it’s about as different from the Bloodsport show that precedes it as you can get, so if you want variety—this could do you some good. 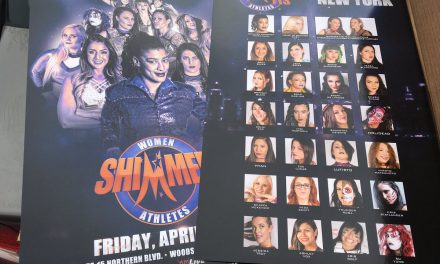