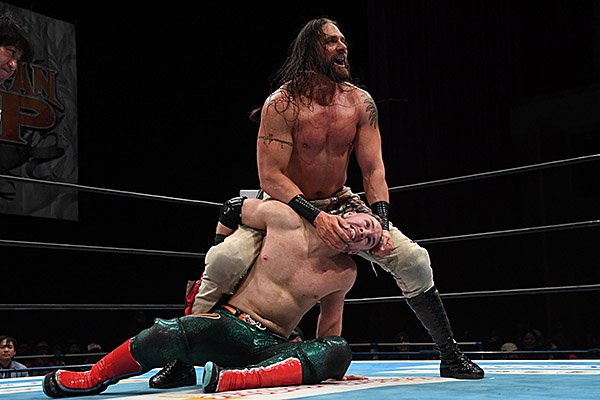 When the brackets for the 2019 New Japan Cup were first revealed, it was pretty obvious that Will Ospreay was going to have one of the toughest paths to the Finals. In the first round, he had to take on the massive Bad Luck Fale. While the current NEVER Openweight Champion was able to successfully slay that giant, he had to take on another giant in the 2nd Round, in the form of Lance Archer. Unlike the aforementioned bout with Bad Luck Fale, this match actually had a ton of the potential on paper. When the dust settled, this ended up exceeding my expectations by a significant margin. This was a fantastic contest from start to finish, and I loved every second of it. The action from start to finish was pretty great, as we got plenty of cool spots and exchanges between these two. Archer played his role as the larger, bully heel to perfection, as he just beat the crap out of Ospreay at points. Massive chokeslams, hard chops, and a big overhead toss off of the barricade were just some of the methods Archer used throughout the match to inflict major damage. However, it wasn’t enough to keep Ospreay down. Not only did he withstand a lot of the punishment that Archer dished out, but he still had enough in the tank to use his speed to take down his much-larger opponent.

At this point, Ospreay managed to hit a standing Spanish Fly, and later on, he dodged a pounce by flipping over Archer. There were so many awesome exchanges between these guys (too many to list). After some big kickouts late (Archer kicked out of the OsCutter while Ospreay kicked out of the Blackout), Ospreay was finally able to get Archer up for the Stormbreaker (in this instance, he picked up Archer off the turnbuckle after hitting a Cheeky Nandos kick), and got the pin to score another huge victory in this tournament.

Again, both guys were fantastic in this match. They played their roles perfectly, and they appeared to have strong chemistry with each other. It wasn’t a shock to see Will Ospreay in a great bout (when does he ever not deliver a quality singles match?), but Lance Archer was pretty awesome in this one as well. This might’ve been his best outing to date in New Japan (easily his best singles outing since facing AJ Styles in 2014 G1 Climax). Speaking of the G1 Climax, I think it’s time that Killer Elite Squad get put back in the tournament. Davey Boy Smith Jr. and Lance Archer are really underrated as singles wrestlers, in my view (especially with regards to their previous G1 outings). They were never the top performers in their blocks, but you could always count on them to have really solid matches throughout the tournament. I’m not sure if they will return to the G1 field, but I’ll keep my fingers crossed. ****1/2

Mikey Nicholls didn’t exactly impress in his 1st Round matchup, but that wasn’t much of a surprise, since the inexperienced Hikuleo was his opponent. He had a much better chance to show off what he could do in the 2nd Round, however, as the newest member of CHAOS took on the faction’s leader, Kazuchika Okada. While this wasn’t nearly as good as Lance Archer vs. Will Ospreay, it was still a very solid match as a whole. It definitely took awhile to get going, however, as the first few minutes were mainly focused around side headlocks. Fortunately, the pace started to pick up around the five-minute mark, as Nicholls worked over Okada on the floor (this included a back suplex on the apron and chop that cut open Okada’s chest).

The action in the final ten minutes was pretty good, and the closing stretch was particularly strong. Nicholls definitely looked better in this match, but it wasn’t a totally stellar outing either. Even though he put forth a solid effort, the result is one that we all expected, as Okada pinned him after hitting a Rainmaker. This was a middle-of-the-road tournament match, in terms of quality. It was far from the best matches in the tournament, but it certainly wasn’t near the bottom either. I’m intrigued to see what Mikey Nicholls does in New Japan going forward. Most of us assume that he’ll soon be reunited with his regular tag team partner Shane Haste (who is currently still in NXT), but until then, it seems like he’s going to be primarily a singles wrestler. The good news for Nicholls is that, if he could have a pretty solid match with Okada, then he can probably have similar bouts with most of the other wrestlers on the roster as well. ***1/2

There were only two tournament matches to talk about on Night 6, but both of them delivered to varying degrees. Lance Archer vs. Will Ospreay was an awesome bout that (for me, at least) was one of the best matches of the tournament thus far. Meanwhile, Kazuchika Okada and Mikey Nicholls had a very good match that proved to be a much better singles debut for Nicholls in New Japan, when compared with his 1st Round bout.