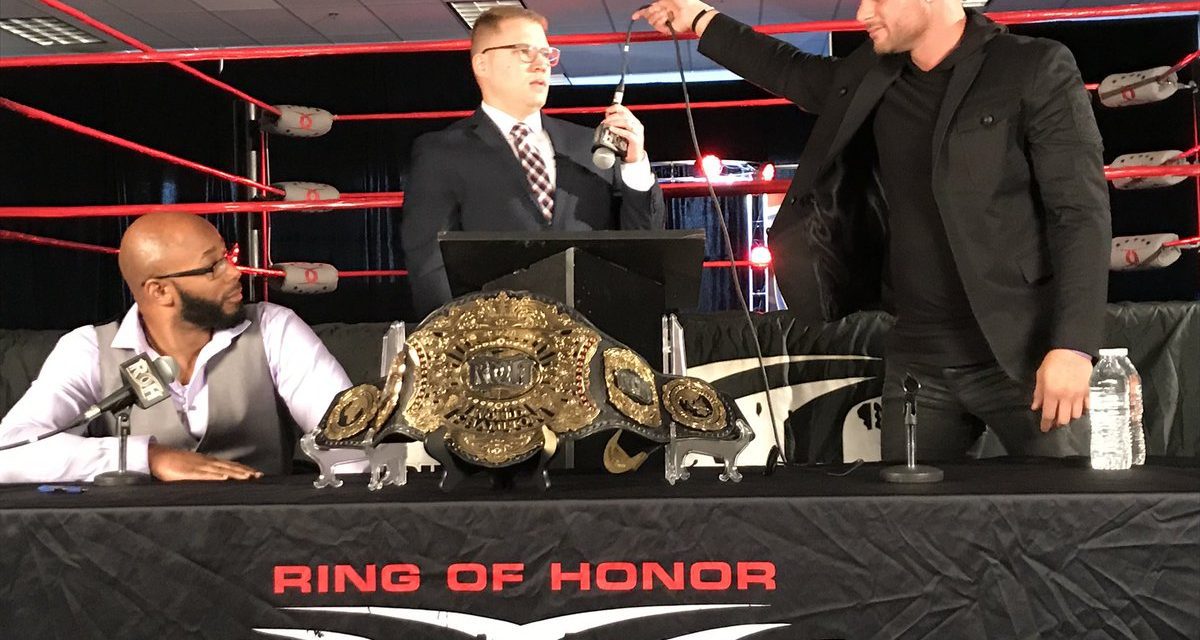 It’s crazy to think that these two faced each other on the first ROH PPV back in 2014 (it was during their feud over the World TV Title when Taven was a face and when Lethal was with the House Of Truth).

On paper, this isn’t the most exciting main event, but it’s a match that’s been several months in the making. Back in June, Matt Taven was part of the Fatal Four-Way where Jay Lethal won the ROH World Title for the second time (that match also involved Cody and defending champion Dalton Castle). Taven scored a visual pinfall during that bout, but the referee had been knocked out at the point. This led to the “real World Champion” storyline, which really kicked off after Taven attacked Lethal with his custom purple title belt at end of the Death Before Dishonor XVI PPV last September. He’s had plenty of incursions with Lethal since then, and in one of the most recent angles, Lethal (with help from Lifeblood) destroyed Taven’s fake World Title. Now I expect the match itself should be pretty good. Jay Lethal almost always delivers on ROH PPV’s. As for Matt Taven, I’ve always enjoyed his singles work in ROH. He’s never been great, but he does get a little too much crap at times as well. He’s always been a very solid wrestler, in my view. While this has the chance to really solid, it wouldn’t shock me if we get interference from the rest of The Kingdom. Wherever Taven goes, his cronies aren’t that far behind. As for the result of this one, I’m really hoping that Taven doesn’t win. While he’s perfect as a perennial contender for the midcard titles, I’ve never seen him at the World Title level. He’s fine as an occasional World Title contender, but he shouldn’t actually hold it. Something else to consider is that the winner of this match will defend the ROH World Title against Marty Scurll in MSG (that was just announced within the last day or two). Jay Lethal vs. Marty Scurll is a much more appealing match on paper than Matt Taven vs. Marty Scurll. That alone makes me think that Lethal is retaining, but anything can happen in wrestling (as they say). I wouldn’t put Taven’s chances of winning at 0%, but they’re pretty low. Prediction: Jay Lethal

Villain Enterprises earned this title opportunity after winning the 2019 Tag Wars Tournament on the ROH live events in Texas back in January. I was actually a little surprised by the results of that tournament at the time, since it seemed like we were heading towards a Kingdom/Villain Enterprises match for the ROH World Six-Man Tag Team Titles at this PPV. Regardless, it’s fair to say that Villain Enterprises has worked out much better than most of us anticipated (thus far, anyway). Brody King has looked good in his various outings, and PCO has really won the ROH fanbase over with all of the crazy stuff that he does in his matches. I’m sure the association with Marty Scurll went a long way in helping to get them over right out of the gate.

This title bout was originally scheduled to be a straight two-on-two encounter, but recently, The Briscoes put out a video requesting that this be a No DQ Match. That was probably the right move, in my view, as the stipulation gives this bout a better chance to succeed. The Briscoes thrive in these hardcore brawls (as they have for many years), and I’m sure the Brody King/PCO team will be taking their share of crazy bumps. The result of this one isn’t in any doubt, since The Briscoes vs. The Guerrillas of Destiny (for both of their respective tag team titles) has pretty much been confirmed for MSG, but this should still be a wild affair. Prediction: The Briscoes

These two met for the first time in singles action last fall, and while Jeff Cobb got the victory on that night (in a non-title affair), Shane Taylor has gradually worked his way into title contention since then. I doubt Jeff Cobb is losing the title here (especially this close to MSG), but I’m actually very curious to see how the match itself turns out. Shane Taylor has appeared on ROH PPV’s before, but I believe this is his first-ever PPV singles match. It’s definitely the biggest test of his career for sure. This match has the potential to be an entertaining hoss fight for sure, and it’ll be intriguing to see how Shane Taylor does. Again, I wouldn’t pick him to come away with the title, but a strong performance could go a long way. Prediction: Jeff Cobb

At the Bound By Honor event in Miami back in February, Mayu Iwatani captured the Women Of Honor Title from Kelly Klein in what was a pretty entertaining match. Now, after successfully defended the title in STARDOM, Mayu returns to ROH to defend her title against the former champion. This is technically the rubber match between these two, as Klein defeated Iwatani in the semi-finals of the Women Of Honor Title Tournament at Supercard Of Honor XII in New Orleans last April. This should be a very solid undercard title bout. Mayu has been awesome in her ROH appearances, and Klein’s best outings in ROH have been those aforementioned bouts with Mayu. The result could honestly go either way. When this match first got announced, my gut reaction was “they’re putting the title back on Klein”. I’m sure everyone would hate to see Mayu’s title reign cut short (she’s easily been the best person to hold this title), but a title change wouldn’t surprise me. At the same time, however, Mayu has been confirmed for the upcoming MSG show, so hopefully that means she’ll escape Las Vegas with the title. Prediction: Mayu Iwatani

This is easily one of the most anticipated matches on the entire card. A first-time ever meeting between (arguably) the two biggest stars that ROH has signed in recent months. There really isn’t much of a story behind it. Bandido challenged RUSH to a singles match, and his challenge was accepted. I’m honestly not sure what to expect from this one, but it certainly has a lot of potential on paper. Of course, it also has the chance to underwhelm, particularly if things do go smoothly (I think back to the bout Bandido had with PJ Black back in January), but I think these two will deliver. It is a bit of a tough spot from a booking standpoint, because preferably, you wouldn’t want either of these guys to lose. RUSH will probably come out with the win (I’m sure most would consider him to be the bigger star of the two), and I don’t believe a loss here will hurt Bandido too much. He is involved in the IWGP Jr. Heavyweight Title Triple Threat Match at MSG, so him taking a loss on PPV isn’t ideal. That being said, ROH has done a very good job pushing Bandido right out of the gate. He hasn’t lost a match since his debut, and has scored a number of falls in multi-person tag matches. Again, it’s not the best booking situation, but falling short to someone like RUSH shouldn’t slow Bandido’s momentum that much. Prediction: RUSH

The story between these two is that while Kenny King has scored a couple of victories over Marty Scurll in recent months, he got those wins via nefarious means. In a singles bout on ROH TV from last fall, King had his feet on the ropes when he pinned Scurll with a rollup. Then, in a Four-Corner Survival Match that took place last month in Miami, King got another victory over Scurll after a low blow and a handful of tights during the subsequent rollup. The fact that King has gotten the upper hand on Scurll so many times just makes it more obvious that Scurll is going to get his revenge here. I expect the bout itself to be pretty good. Scurll always tends to step up on these bigger ROH shows, and while people have been down on King for awhile now, he’s still a solid midcard hand (in my view, at least), who can have strong matches when he’s in there with the right opponent. King does have the hometown edge, but the result of this one isn’t in much doubt. I fully expect Scurll to get the win here as he builds momentum towards his shot at the ROH World Title in MSG. Prediction: “The Villain” Marty Scurll

Despite the fact that these guys have been around ROH for quite some time, this is only their second meeting in singles competition (their only previous encounter was in 2017). This is another bout that really doesn’t have much of a backstory, but it should be a very entertaining undercard match. Gresham is always a ton of fun to watch, while Silas is usually pretty good as well (I feel like he’s a little underrated by some). The result could go either way, but since I’ve already picked a lot of faces to win on this show, I’ll go with the heel here. Prediction: Silas Young

While not all of the members of Lifeblood are on this card (Juice Robinson is on tour with New Japan while David Finlay is out with an injury), some of them are teaming up here to take on Vinny Marseglia & TK O’Ryan from The Kingdom. There is a little bit of a backstory to this one, as on a recent episode of ROH TV, Lifeblood held off The Kingdom as Jay Lethal destroyed Matt Taven’s purple World Title belt. This should be a very solid tag team affair. Even though The Kingdom didn’t exactly endear themselves to the larger New Japan fanbase on the recent Honor Rising events, Marseglia and O’Ryan do relatively fine job as a tag team when they’re in there with the right opponents. With David Finlay on the shelf for at least six months with a torn labrum, it looks like this Mark Haskins/Tracy Williams pairing will become the regular tag team from Lifeblood. I’m sure what the ceiling for this match is, from a quality standpoint, but I’m sure these two teams will deliver a fine undercard bout. I wouldn’t rule out the possibility of The Kingdom winning, but I’m going to go with Lifeblood here. A win would help establish the Haskins/Williams team, and it could set up the stable as a whole for a future shot at the ROH World Six-Man Tag Team Titles. Prediction: Lifeblood