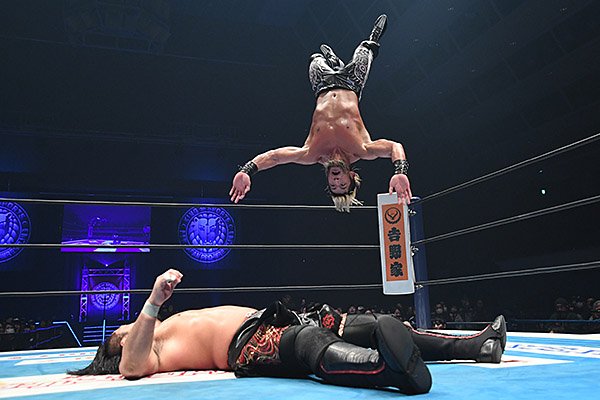 All sixteen matches of the first round in the biggest New Japan Cup ever have come to a close, and after just one day of rest, the New Japan Cup will resume on Wednesday with the second round.

If you missed it, be sure to check out our comprehensive preview of all 32 competitors from last week. This will just be a quick preview covering all the 2nd round matchups now that we know what they are. Once again, we’ll go in bracket order. 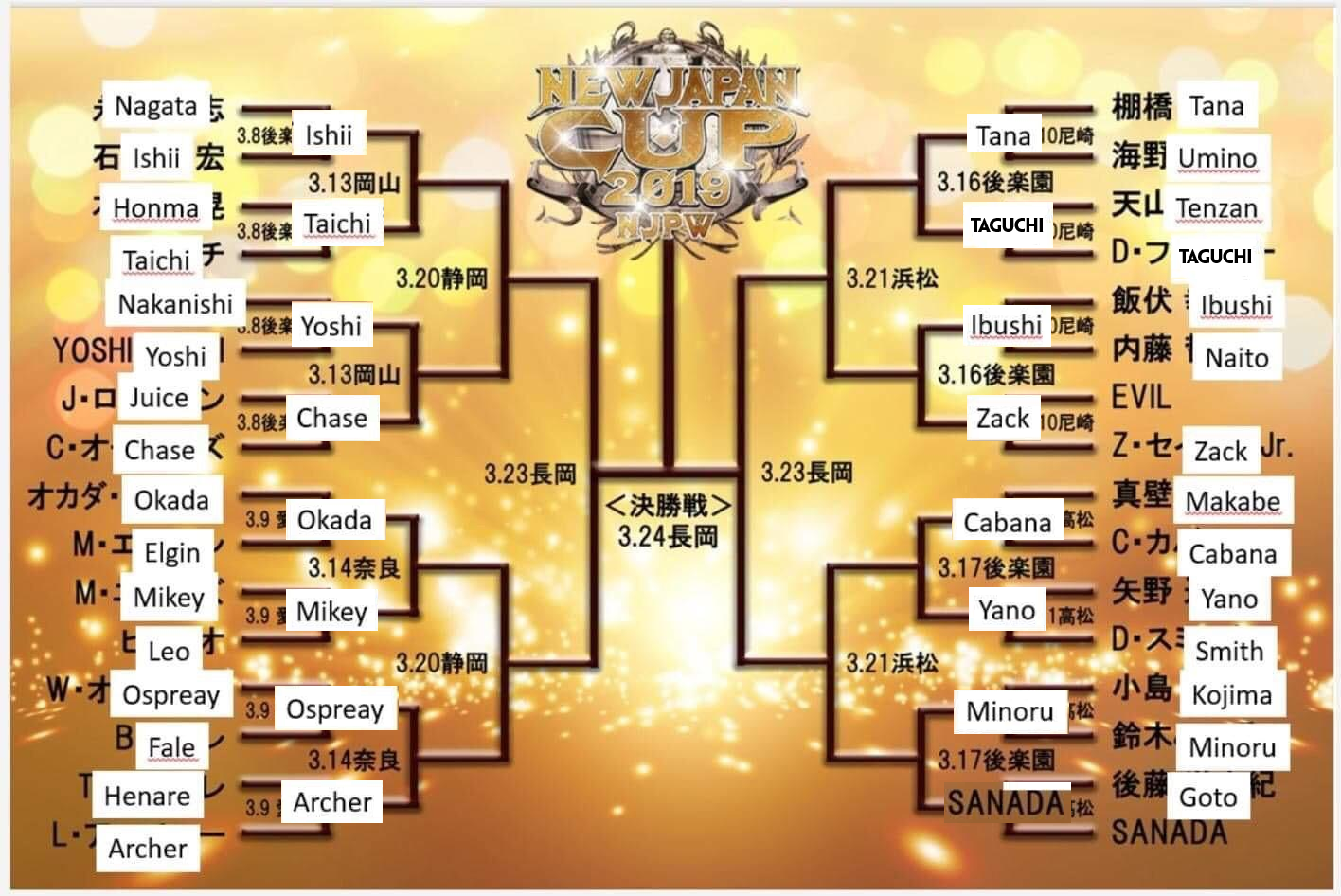 Ishii and Taichi will meet in their third ever singles match Wednesday night in Okayama, but this will be their first meeting in over nine years. Ishii defeated Taichi on November 30th, 2009 in Kyoto and February 10th, 2010 in Osaka, two matches that are frankly ancient history and mean very little in the grand scheme of things to us today. Ishii will be trying to make his fifth NJC quarterfinal with a victory here, while Taichi is coming off his first victory in his second NJC over Honma at Korakuen Hall. Given that the winner is facing the Chase-YOSHI winner, it almost feels like what’s at stake is a path to the semifinals rather than the quarters, as both Ishii and Taichi would be heavily favored to beat either one of those two. Prediction: Tomohiro Ishii

Chase Owens of course busted the brackets of many fans (this author’s included, as he was sure to let everyone know; you were my only wrong pick in the entire first round, Chase!) when he defeated the IWGP US Heavyweight Champion Juice Robinson at Korakuen Hall, by far the biggest upset of the tournament. Standing across from him will be YOSHI-HASHI, who seemed to just barely escape what would have been an embarrassing defeat at the hands of Manabu Nakanishi, a veteran competing in his first NJC in six years. Even though it may have been in less than satisfying fashion, YOSHI did get past the first round for the first time in his career (on the sixth try). They’ve never had a singles meeting before so this will be a first time ever matchup. Who continues their Cinderella run to the quarterfinals? Prediction: YOSHI-HASHI

Okada got a stiff test from a very game Michael Elgin in the main event of Night 2 of the New Japan Cup, but after over 24 minutes he was able to outlast him and move on to the second round for just the second time in his career (and the first since 2013). His opponent, on the other hand, went through a much less grueling match against the inexperienced Hikuleo, defeating him with relative ease in under nine minutes. If Nicholls manages to pull off the ultimate upset over his new CHAOS boss in this first time ever singles match, perhaps the great discrepancy in already exerted effort will be the given reason. But one has to think Okada is still the favorite here. Prediction: Kazuchika Okada

Will Ospreay vs. Lance Archer

Will Ospreay handed Bad Luck Fale his first loss in the NJC’s opening round ever, and in the process became the only reigning champion to avoid losing there this year. The NEVER Openweight Champion survived while the IWGP Intercontinental & US Heavyweight champs did not, but Ospreay will have another stiff test against a much larger opponent if he wants to keep going. Archer, meanwhile, managed to win a match in the NJC for the first time ever in his fifth tournament. He and Ospreay have never faced each other in a singles match before, but they did just meet in a tag team match (Archer with his normal partner Davey Boy and Ospreay with Hiroshi Tanahashi) on February 21st. Ospreay got the pin on Davey Boy in that tag, so Archer could both get revenge for his partner and perhaps set himself up for a future NEVER title shot with a win here. My gut says Ospreay wins and moves on to a showdown with Okada, a rematch from 2018’s Anniversary show main event. Prediction: Will Ospreay

Tanahashi’s seventh first-round victory in the New Japan Cup (out of ten tournaments) was all but guaranteed, but that isn’t to say that young lion Shota Umino didn’t put up a hell of a fight. Meanwhile, Ryusuke Taguchi participated in his first NJC since 2008 as a last-minute injury replacement and picked up a bit of an upset win over veteran heavyweight Hiroyoshi Tenzan. That moves him into this second round match with Tanahashi…..the same man who defeated him in the second round of the NJC in 2008! Is it going to be deja vu all over again for Taguchi, or will he pull off an even more shocking upset of Tanahashi here? Their other two singles matches include a meeting for the IWGP U-30 Openweight title (a title that was around briefly for wrestlers under the age of 30) in 2004 and a December 9th, 2011 meeting, both also won by Tanahashi. It would be the upset of all time if Taguchi manages to beat the Ace for the first time in his career. Prediction: Hiroshi Tanahashi

Sabre moved to 5-0 in the New Japan Cup with his submission win over EVIL, and now finds himself facing the exact same second-round opponent he had last year in Kota Ibushi. Ibushi meanwhile defeated Tetsuya Naito in an instant classic to move on, and despite losing to Zack in last year’s NJC he holds the better head-to-head record, with wins over him in each of the last two G1s. With all due respect to Taguchi, a win here by either guy will almost certainly set up the biggest quarterfinal match of the tournament against Hiroshi Tanahashi, and both guys have a ton of recent history with the Ace. Will Sabre win to set up a rematch of last year’s NJC final, or will it be Ibushi moving on to a rematch of last year’s G1 Climax final instead? Prediction: Zack Sabre Jr.

A first-time participant has won the New Japan Cup five times in its history (kind of a lot when you realize there have only been 14 tournaments before this year, which means it’s happened more than a third of the time), and Cabana is one of the four remaining first-timers still alive in the tournament (the others being Chase, Nicholls and Ospreay). Meanwhile his opponent Toru Yano has been in literally every New Japan Cup in history except for the very first one, so these two are about as different in NJC experience as you can get. Yano and Cabana have just one prior singles meeting, which came on an ROH Global Wars show in Chicago in October 2017 and saw Cabana emerge victoriously. I think Yano probably evens the score here and punches his ticket to his 9th quarterfinal. Prediction: Toru Yano

Finally, we move on to our last second-round matchup, between two guys who have a surprising amount of history dating back to their time in All Japan Pro Wrestling. Suzuki and the then-Seiya Sanada met in singles matches six times in AJPW between April 2009 and April 2011, with Suzuki winning the first five matchups before finally falling to Sanada in the 2011 Champion Carnival. Following that loss Suzuki would depart AJPW about two months later, only to suddenly re-emerge in New Japan at the start of July, brought in as the new leader of the ex-Kojimagun. Suzuki, of course, beat Kojima in the first round of this year’s New Japan Cup, so it’s almost like his run through the NJC is taking him through his long lost past. Seiya Sanada would follow Suzuki to New Japan about five years later, where he became LIJ’s SANADA, and the two have met just twice in singles matches in NJPW since his arrival: in the 2017 G1 Climax and on February 2nd of this year at the New Beginning in Sapporo. Both matches saw Suzuki get the win. If SANADA is going to continue on as the last LIJ member remaining in this year’s tournament, he’ll have to beat Minoru Suzuki in NJPW for the first time (and only the second time overall). I think he pulls it off. Prediction: SANADA

That will do it for our second round preview! We hope you enjoy all of the action. Keep it tuned here to Voices of Wrestling for more reviews of all the tournament matches going forward and all your NJC coverage needs. Also, be sure to check out the standings in VOW’s New Japan Cup prediction contest at challonge.com/vownjcup19. 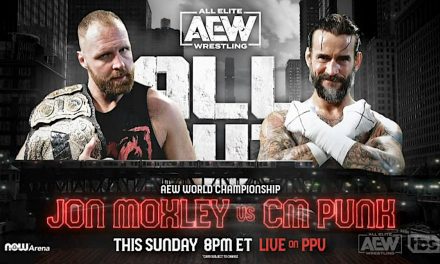 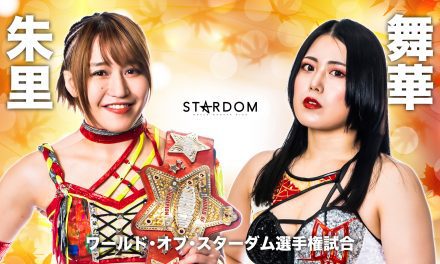