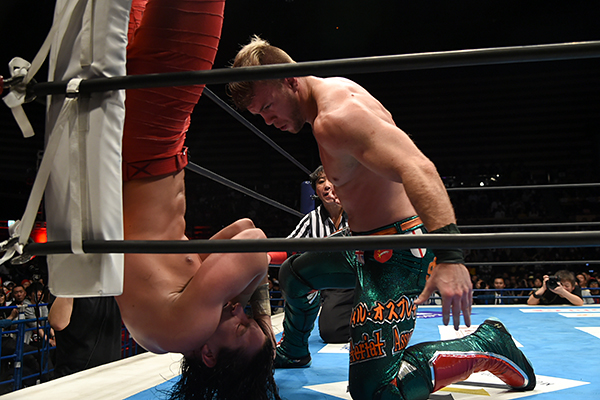 With Rocky Romero getting his charges ready for their Jr. Tag Title match, Colt Cabana joined Kevin Kelly on commentary. That gave Colt a chance to scout his first-round opponent in the New Japan Cup, Togi Makabe. You could tell this was a special event because Makabe actually got in the ring. I don’t think he bumped, because it is still a ten-man tag. Owens got the pin on Yoshida with the package piledriver. **

Ishii’s sole focus was on Nagata, to the point where he ignored Henare tagging in and continued going after Nagata early in the match. We got a preview of their New Japan Cup match on the 8th, with very smooth counters to go along with the strike exchanges you would expect from them. Henare brought his usual intensity, almost getting the win with a big spear, but got put away by YOSHI-HASHI in the end. Fun stuff. ***

Don Callis joined the English announce team for this one. This is a preview of two New Japan Cup matches, between Taichi & Honma and Suzuki & Kojima. This was your typical Suzuki-gun tag match, with a lot of brawling on the outside. This was fun when the juniors were in, it wasn’t so fun when Honma was in. On the plus side, Honma sounds like a lizard when he gets fired up. The closing stretch was fun, with everyone getting in and hitting a few quick shots before Taguchi pinned Taka with the Dodon. They kept me in suspense with Dragon Lee hitting a few poses in the ring, but there were no surprises afterward. ***

It was at last year’s Anniversary show where Roppongi 3K lost the junior tag titles to Kanemaru and Desperado. After a year of struggle, they finally get the titles back in a damn good match. As someone that doesn’t watch Dragon Gate, I can say that Shingo Takagi is fucking great. He was dominant here, but Sho and Yoh kept going after his tweaked knee and eventually took him out of the picture. Bushi misted Sho, which led to Roppongi 3K losing the titles last year, but Yoh was there to break up the pin attempt. Sho caught Bushi’s MX attempt and turned it into a 3K for the win and the titles. ***3/4

While this wasn’t an excellent match, it was very effective in establishing Ishimori as a dominant champion. New Japan has been very good about that with Ishimori, having him blitz KUSHIDA at Wrestle Kingdom and beat former champion Taguchi in convincing fashion. Now you can add Junior legend Jushin Thunder Liger, with Ishimori tapping him out with a crossface. Liger put up a fight, almost earning a count out win with a brainbuster on the floor. He was able to land a Liger Bomb and use the flash pin that pinned Ishimori at Honor Rising, but Ishimori was able to kick out and lock on the crossface and win. After the match, Ishimori challenged anyone to come out and face him in a title match at Madison Square Garden. That brought out…Dragon Lee, who accepted the challenge and left. Not what I expected, but something I’m very much looking forward to for the G1 Supercard. ***1/4

An all-action, all-star six-man tag match here. This was six great wrestlers having a fun tag match with very little down time. It’s nothing you’ll have in your Match of the Year lists, but it was an easy watch. Goto got the win by tying up SANADA in a pinning predicament. Afterward, all three of the winners said that they would win the New Japan Cup, and in a blatant bit of Tumblr bait, Okada called Tanahashi senpai. ***

White took Ospreay’s ribs out early on by flinging him into the ringpost. That would keep Will from getting White up for the Blade Runner on multiple occasions. Ospreay would get more offense in other ways, hitting Scorpion Kicks and landing the Hidden Blade elbow. Ospreay got more offense in here and felt more of a credible threat this year than he did at last year’s Anniversary Show against Okada, showing his progression from top junior to credible heavyweight. The closing stretch of this match was fantastic. Ospreay went for another Hidden Blade when Gedo jumped in the ring, which allowed White to hit a low blow. White went for the Blade Runner, but Ospreay turned it into a powerbomb. Ospreay then went for an OsCutter, but White turned it into a Blade Runner, then hit another one to put him away. A very good match that raises the question: If Ospreay can take the Heavyweight Champion to his limit, how well could he perform in a G1?

After the match, Gedo and White went to attack Ospreay, but Kota Ibushi came off of commentary to save him. Bullet Club came out, which led to Tanahashi, Okada & Goto to come out and run them off. White had words with the three favorites to win New Japan Cup (and Goto) before leaving. Then, in an odd moment, the babyfaces spent five minutes pointing at themselves and saying that they would beat White at MSG. ****1/4 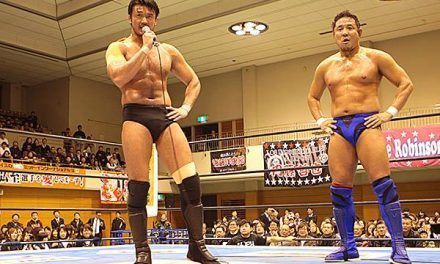