Tag Team Elimination Chamber Match – WWE Women’s Tag Team Championship
Nia Jax and Tamina vs. The Riott Squad vs. Mandy Rose and Sonya Deville vs. The IIconics vs. Bayley and Sasha Banks vs. Naomi and Carmella

Barry: Many folks are expecting a major cluster of a match and I can understand why. Nia Jax and Tamina are involved, which automatically means something is getting botched and someone is likely to get hurt or injured. Liv Morgan and Sarah Logan aren’t exactly polished performers at this stage of their career and neither are the IIconics. Additionally, the Royal Rumble match is still fresh in our minds, and while it had a hot finish it was, at times, a cringe-worthy botchfest. The inherent dangers of performing inside the Elimination Chamber environment call for a degree of precision that I’m not sure many of these performers actually have. This match will require a thoughtful structure; one that accounts for the expected intensity a match of this nature should have, but also accounts for the realistic limitations of many involved.

Storyline wise, we have four heel teams to just two babyface teams, which is an interesting dynamic. There are enough differences between the heel teams to make for some fun altercations, which is something that should be exploited. It would be far more interesting to see The IIconics squaring off with The Riott Squad or Sonya Deville facing off with Nia Jax rather than the simple story of heels ganging up to try and eliminate the babyfaces. We still don’t know how these titles will be appropriated among the RAW and SmackDown Live brands, but it feels like a heel team should win this match, regardless of brand affiliation, in order to set up a babyface chase that culminates at WrestleMania 35. On the RAW side, Nia and Tamina are the obvious choice and probably the right choice, but I personally would much rather see Riott Squad in that position. On the SmackDown Live side, I suppose The IIconics would benefit most, though I’m not much of a fan of their act.

As for the ongoing Bayley and Sasha Banks storyline, I’ve tried really hard, but I’m really not into this Boss & Hug Connection thing at all. I haven’t been in favor of this friendship from the start, but I thought the introduction of the tag title division may change that feeling. It has not. Sasha is a heel, plain and simple. Sometimes typecasting is a good thing. It’s been a year since these two first appeared to be in the fastlane headed toward a WrestleMania 34 confrontation only to inexplicably veer off into creative purgatory for the majority of 2018. I can’t remember a scenario where I was less interested in a team’s creative trajectory together and solely focused on the potential of a singles feud as I am with these two women. I thought we may finally be moving toward that obvious direction in recent weeks, only to learn that Banks is merely being protected as she mends from an injury. Alas, this uninspiring team has likely been chosen as the chasers for the division’s WrestleMania storyline so I don’t see a compelling end to this friendship in sight. Prediction: Nia Jax & Tamina

Suit Williams: WWE’s women continue to evolve, and now they get a set of tag titles to be defended almost exclusively on pre-shows! EQUALITY! The obvious answer to win this match is Sasha and Bayley, as they didn’t feud for the sole purpose of winning these titles. But this is WWE, and you can’t do the obvious thing until it’s 2 months too late. So who else can win these belts? I don’t think Naomi and Carmella are even friends, and the IIconics are jjobbers. That leaves The Samoans, Team Tough Enough, and The Riott Squad. I like Liv Morgan, so I’ll go with the Riott Squad. Prediction: The Riott Squad

Barry: Since defeating The Bar to win the SmackDown Live Tag Team titles the relationship between the Miz and Shane McMahon has been nothing but positive; a pitch-perfect set up to the inevitable conflict looming on the horizon. I still don’t have a good feel for which of the two will ultimately turn heel, and I’m not totally convinced we’ll find out during the course of this match. The prospect of a babyface Miz is starting to grow on me, but I’m not going to get ahead of things as I’ve enjoyed this build.  I do, however, believe this is the end of the road in terms of their championship reign and it should be. The larger narrative of Shane and Miz is not about the tag team titles and having served the purpose of advancing the story, the titles should be removed from the equation as we pivot to the conflict that will ultimately bring these two to become rivals. The Usos continue to be incredibly compelling and I’m glad they appear to be returning to the top of the division as we inch closer to WrestleMania 35. Prediction: The Usos

Suit: Giving credit where it’s due, this Miz and McMahon story is a nice midcard story. But there is no one on this roster that I have more fatigue with than The Miz. Jim Cornette once said that you can’t miss someone if they don’t go away, and the Miz has been a constant on WWE television for 12 years. He’s been good for a majority of that time, including now, I just need that time to miss him. According to reports, The Usos don’t want to extend their expiring contracts. I’d be in favor of them leaving. They have been treading water since their awesome feud with the New Day, and they’re too good to be doing that. Miz and McMahon win, and with luck, Jimmy and Jey moonwalk to All Elite and an eventual money match with the Young Bucks. Prediction: Miz and McMahon

Barry: Baron Corbin has become quite the strange character study. His main roster ceiling was correctly estimated to be incredibly low following his NXT call-up. Since that time he has unequivocally surpassed those low expectations. The Constable Corbin and Interim GM character actually enabled him to come out of his shell as a performer in a manner that I didn’t think was possible. In spite of shattering those low expectations, however, Corbin adds no real value to the RAW brand whatsoever. Only in WWE could such a perplexing conundrum take place. Meanwhile, Braun Strowman’s character has officially entered recession territory from an audience investment perspective. We’ve seen this match so many times on RAW. This never-ending feud has been stuck in neutral since last December and it wasn’t all the compelling before that. The matches are not very entertaining, they have zero heat and nothing is ever advanced…but aside from that, it’s been great. Prediction: Braun Strowman

Suit: If you are reading this, and the thought of another Baron Corbin vs. Braun Strowman match excites you in any way, tweet me @SuitWilliams and let me know. I’m not gonna make fun of you or anything, I just want to see if you exist. Braun Strowman’s star is pretty much dead, and Baron Corbin is actively rotten. Since it doesn’t matter, I’ll pick Braun. Prediction: Braun Strowman

Barry: Bobby Lashley and Lio Rush are two acts that just do not connect with me on any level. Lashley, like a mannequin in a  department store, is completely devoid of any emotion, charisma, or basic signs of life that make me want to care about him. Rush has the talent to compensate for his charge’s shortcomings, but after a few weeks it became obvious to me that this act is not worth my time. The Intercontinental Championship would be a nice slot for Finn Balor on the heels of his compelling defeat to Brock Lesnar. Overall, this is another match I’ve seen over and over again on Raw with little advancement having been achieved. Prediction:Finn Balor

Suit: I like Lashley and Rush together. Lio gives Lashley a little juice as a heel, and Lashley is at his best when all he has to do is snarl and be mean. Hopefully, Balor’s match with Lesnar at the Rumble impressed enough people to get him a sustained, top-level push. The handicap stipulation is a blaring bullshit alarm, so I’ll say that Balor pins Rush, but Lashley retains the title because he didn’t get pinned. Sound dumb? Welcome to 2019 WWE. Prediction: Finn Balor

Barry: You all know where I stand with 205 Live. Nothing has changed. Prediction: Buddy Murphy

Suit: This is a pre-show match because 4 hours just isn’t enough time to get these guys a solid 10 minutes. Big Match Buddy Murphy has shined anytime he can, and Tozawa has proven a reliable opponent for a lot of guys on 205 Live. Murphy will retain, and hopefully, the people coming back from a beer run make some noise for this one. Prediction: Buddy Murphy

Barry: Two of the most vexing booking flaws in contemporary pro wrestling are: when a match is booked with only one possible outcome due to expectations on future shows and a wrestler advancing towards a championship match by going backwards (losing the previous match or angle prior to the championship angle). Ruby Riott getting a shot at Ronda Rousey’s RAW Women’s Championship is the epitome of both flawed concepts. We absolutely know Rousey is going to WrestleMania as champion. Riott, for her part, has only won one televised singles match in 2019, and it came after the championship opportunity was announced. Since her main roster call up Riott has lost nearly 80% of televised matches. If that’s not backing into a championship match, I don’t know what is. Prediction: Ronda Rousey

Suit: The main event segment of this past week’s Raw was centered around Vince McMahon changing the Raw Women’s Title match at Wrestlemania from Ronda Rousey vs. Becky Lynch to Rousey vs. Charlotte Flair. Neither Ruby Riott’s name, nor this match, were even mentioned. Both Ruby and Ronda are good, so hopefully they can get the crowd into the match despite the unsurprising finish. Prediction: Ronda Rousey

Barry: I’m guilty of looking past this match and trying to figure out what Daniel Bryan’s WrestleMania plans will be. I don’t see him dropping the title before WrestleMania and I’m curious who is opponent would be. I’m really hoping Mustafa Ali’s name is drawn from that hat, but with the injury keeping him out of this match I’m worried that won’t happen. Now that this match is right in front of me I have to say, I’m pretty excited for it. I would expect Samoa Joe to really shine inside the Chamber environment. Jeff Hardy will do something crazy, AJ Styles and Kofi Kingston will pull their weight…and Randy Orton will chill in a pod for half an hour and then RKO someone. Prediction: Daniel Bryan

Suit: Despite this being the main event, I’m not really excited for this match. Mustafa Ali got pulled due to nagging injuries, leading to the biennial Kofi Kingston push. I would like that, but I would also like to play for the New Orleans Saints and main event Wrestle Kingdom. Some dreams don’t come true. Hardy and Orton are years past their best-by date. And ever since the introduction of the Big Recycler Erick Rowan, my caring about Daniel Bryan has steadily declined. Unfortunately, the only realistic option to win this match is Daniel Bryan. This story seems to be heading toward a valiant, meat-loving babyface taking the title from the evil environmentalist, so Bryan losing here wouldn’t make sense. So all I’m hoping for here is that the match is fun and chaotic and that Samoa Joe gets some shine. Prediction: Daniel Bryan 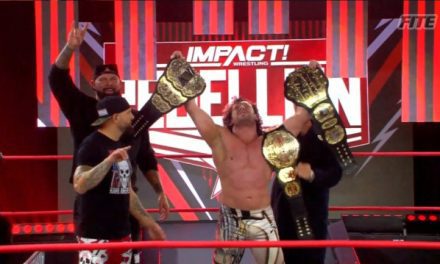 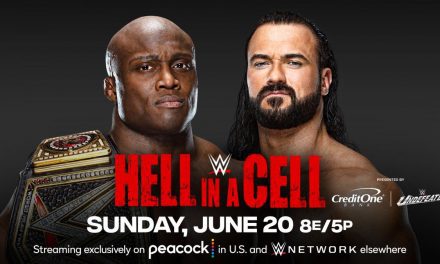