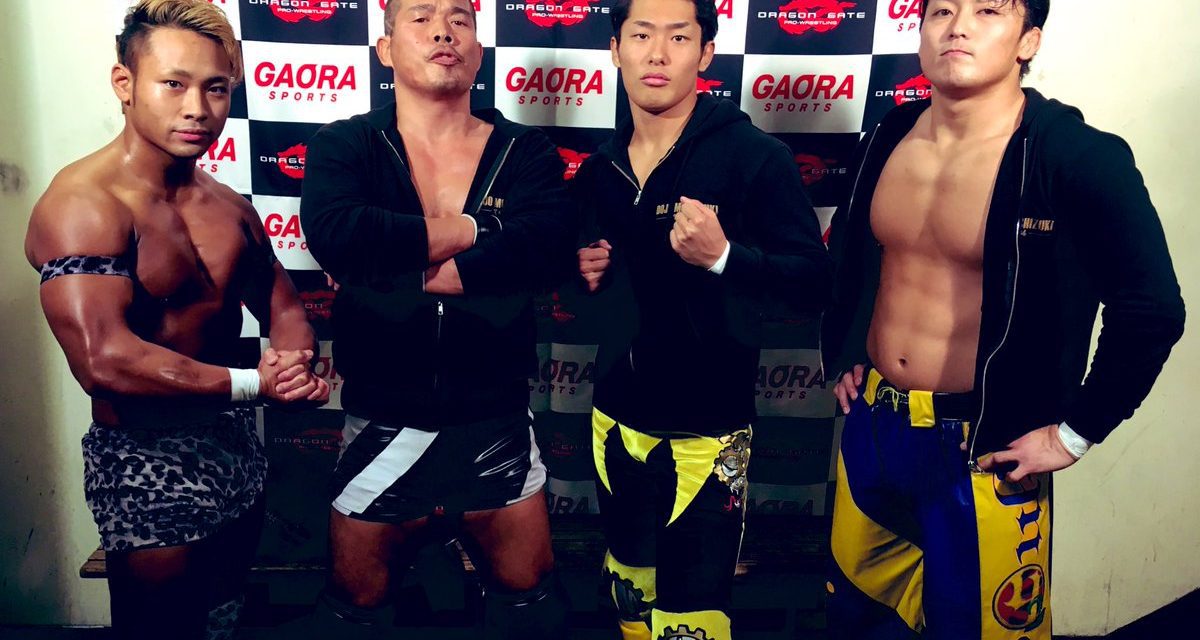 Yuki Yoshioka continues his hot streak by scoring a surprising fall over K-Ness in the opener. The dynamics of this match really worked with the Mochizuki Dojo youngsters taking charge to battle the veterans of K-Ness, Gamma, and Hiroshi Yamato. Yamato took the brunt of the damage dished out, which put a smile on my face, but in the end, K-Ness was rolled up and the youngsters celebrated their win accordingly. Until further notice, any match containing Yoshioka, Shun Skywalker, or Kaito Ishida is deemed essential viewing. ***

The opening match had three of my current favorite wrestlers in Dragon Gate between Mochizuki, Yoshioka, and Minoura. This match, with Sakamoto, Kanda, and KAI, displayed my three least favorite currently. Funny how that works.

Sakamoto isn’t actually that bad but he’s not up to par with the rest of the roster. Kanda and KAI, well, you know. The cards were stacked against them and while this match wasn’t painful, it also wasn’t very good. Two-thirds of the Triangle Gate Champions score the fall as they build momentum for their March defense against MaxiMuM. **1/4

When I saw that this match had been announced for this card, I feared that maybe U-T was in the doghouse. A singles match against the monster of the roster didn’t make any sense to me; not when U-T has been on the hottest run of his career by tying up men his size with llave-influence submissions. Yoshida isn’t tiny and he isn’t flexible enough to be tied into knots.

The first third of this match was Yoshida beating down the much smaller man without much of a fight. It looked like my fears had been confirmed.

U-T then started to fight back. Small bursts of offense at first, but it was enough of an attack to bring Yoshida to the ground and put the Bienllave on him, the submission that has helped him rack up countless victories since the fall. Yoshida escaped the hold not through technique, but through brute force. He’s simply bigger than U-T and it helped him reach the ropes.

At this point, I assumed U-T was going to get one more hope spot before eating a Cyber Bomb. That way he’d be able to say that he still has some work to do, but his style is proving that he can fight with heavyweights. No. U-T pinned Takashi Yoshida. Yes, it was a rollup, but that’s life. A year ago, this would’ve been a three-minute squash match that ruled in favor of Yoshida. In fact, upon further investigation, he DID pin U-T in 7 minutes at one of the December 2017 Korakuen Hall shows.

I thought this match was going to be the beginning of a long story arc for U-T, but instead, they are fueling up his jetpack to blast into the main event scene. This match just worked. This isn’t a MOTYC or even a spreadsheet match, but go out of your way to watch this if you have an investment in the Dragon Gate freshman class. ***3/4

For one night only, the Toryumon 2000 Project was back in full force with Masato Yoshino and “brother” YASSHI taking up their former Italian alter egos, Shachihoko Boy switching his gear to dawn Shachihoko Machine, and for the first time since the end of 2004, Toru Owashi returning to a Dragon Gate ring.

T2P was a class of Ultimo Dragon and Skyade trainees and featured the debuts of men like Masato Yoshino, Shuji Kondo, Anthony W. Mori, Ryo Saito (who bridged the gap between the two classes), and most notably, current New Japan Pro Wrestling commentator, Milano Collection AT. Later on, Toryumon’s Crazy MAX unit, most notably Don Fujii, would join the fray.

The T2P style focused on an entirely different kind of wrestling than the original class. They were trained using the llave style, which we now see implemented by U-T. While only lasting just over a year, T2P remains one of the most innovating and interesting promotions in wrestling history. If you haven’t seen anything from the promotion, I highly recommend downloading these matches.

Masato Yoshino, Milano Collection AT, & Stevie Tsujimoto vs. Anthony W. Mori, Ryo Saito, & Takayuki Yagi: 1/23/02 – the first glimpse we see of an Italian Connection unit and one of the true epics in promotion history

As for the reunion show, the band played the greatest hits and while it wasn’t what it once was, everyone went home happy. NR

Korakuen Hall is starting to become Shun Skywalker’s building. He made his mark early on with a gutsy performance in the now infamous Rookies vs. Legends 10-man from December 2016, and after spending a chunk of 2017 and early 2018 as the focus of undercard matches, Skywalker has rattled off a number of tremendous matches in Korakuen Hall. He had the double title Willie Mack slugfest in September, the U-T time limit draw in December, the Rookie Ranking Tournament final vs. Kaito Ishida last month, and now, has picked up undoubtedly the biggest win of his career against his peer, Ben-K.

Shun Skywalker is a star.

This match had its moments early, but the bulk of the contest picked up when Skywalker got the upperhand in a forearm exchange against the bigger, more powerful Ben-K. The two traded spurts of offense after that. Ben-K had the masked 22 year old on the ropes with a variety of suplexes, but Skywalker was resilient. Ben-K’s grapple-focused attack could not grand the high-flyer.

Ben-K has been known to drive opponents into the mat with a high velocity spear that puts notorious spears from the likes of Edge and Rhyno to shame. He connected with one early in the match, but when attempting a second one, he ate a vicious Bicycle Kick from Skywalker. That gave him the opportunity to hit his signature moonsault and get the pinfall. That’s how you elevate a wrestler. ****1/4

It’s nice that Kaito Ishida and Jason Lee can be put in a Korakuen semi-main and they don’t feel out of place. The last match had a slow build with an epic finish while this match was balls-to-the-walls from the beginning.

Ishida, especially, had something to prove as he seemed to get shots in on every member of the heel unit. I raved about Yoshioka in the opener and then Skywalker in the prior bout and now I must do the same about Ishida. He is so electric, so charismatic, and so intense right now, it’s hard to keep my eyes off of him. If the world ended tomorrow, he’d go down in my notebook as my 2019 Wrestler of the Year. No one has been as good as him since the calendar flipped.

PAC looked smooth as silk in this bout, but unfortunately for him, that wasn’t enough to propel his team to victory. Eita stunned Shimizu with a Superkick by accident, leading to Ishida (awkwardly) rolling him up for the pin. Tensions continue to boil for Shimizu and the rest of R.E.D., but the same can ultimately be said for parts of MaxiMuM as Dragon Kid and Naruki Doi have had issues of their own.

Regardless, this match was a terrific sprint. Ishida shined, Lee held his own, PAC looked just about as good as he has since returning to the company, and the R.E.D. storyline progressed nicely here. Another match worth watching. ***3/4

Shun told Ben that he knows he hasn’t surpassed him with this one win. It probbaly doesn’t even put him at the same level. What this win over Ben-K did do is show the world that he belongs in the main event scene. He knows he will have to fight with Ben many more times. They will probably be fighting the rest of their careers. Shun vowed to keep fighting and evolving so he can be seen at the same level as Ben, or even be thought of as surpassed him. Ben took the microphone but again dropped it without saying a word. Shun promised to reach the top of Dragon Gate and hoped the fans would Skywalk with him along the way.

Triple threats aren’t supposed to be good, right? This match was kind of good for a while, then it got really great, and then it fluttered back down to being very good. I think I need another week before I can fully digest everything that happened in this match, but the bottom line is Kzy pinned both YAMATO, his generational rival, and Doi, a bonafide top-of-the-line guy, on the same night.

Once you move past the tentative opening minutes with each man trying not to make a mistake, this became a fierce contest between three men who portrayed desperation to come out as the victory. Kzy is red-hot and has a Dream Gate challenge coming up on February 10, so he wanted to win to build momentum. YAMATO wanted to win to knock Kzy down a peg and remind him that he’s still a top dog. Doi wanted to win because that ruins the fun for YAMATO and because a win could’ve given him enough of a cause to stick his nose into the Dream Gate picture.

It was Kzy who came out victorious, though. He trapped YAMATO with a Skyade Schoolboy to score the fall, then four minutes later, declared it’s KZ Time and pinned Doi accordingly.

Those last four minutes, or more realistically, the last two minutes of the match, is where I got lost. The crowd was so hot after the YAMATO elimination and they peaked when Doi teased a Muscular Bomb. Kzy escaped, and the two fumbled around for a minute until Kzy finally won. I don’t think it’s fair to say the two botched anything, but in a fit of urgency to get the win, a few transitions were a tad awkward.

Perhaps I’m being harsh, but they had a narrow opportunity to make this the runaway match of the night, but that opportunity passed. As it stands, this match was still legitimately great, far better than 99% of the triple threats that North American companies will put on this year. It’s worth your time. ****

R・E・D quickly hit the ring to put a damper on Kzy’s win. Kzy says he is crazy. If he thinks PAC is scared of him, he must be crazy. In Hakata, PAC is going to fucking kill him.

With tensions starting to boil over in #MaxiMuM, Dragon Kid and Naruki Doi will settle their differences 1 on 1 next month in Tokyo. #dragongate

Two matches at **** or higher and two at ***3/4. We are now far past speculating about whether or not Dragon Gate is “back”. The number two promotion in Japan is once again cementing itself as a can’t-miss, finger on the pulse promotion. It might have taken two years longer than most Dragon Gate fans thought it would, but they now have a crop of youngsters that are capable of being leaders in the future. This promotion is fresh. The booking is revitalized. The in-ring is top notch. Truth Gate 2019 is essential viewing. 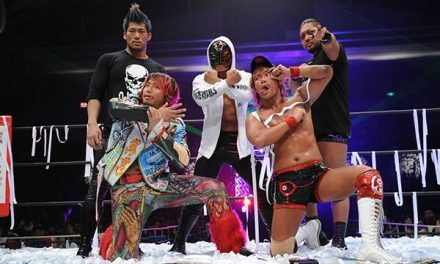