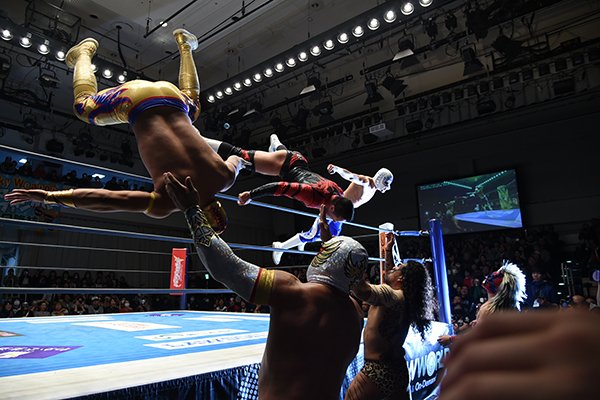 Second to last show of the FantasticaMania tour has a great looking main event between this year’s Family Tag Tournament winners (Dragon Lee & Místico) against last year’s winners (Último & Gran Guerrero). Also, the blow-off match of the boring Terrible-Kushida rivalry and more opportunities for the luchadores to impress the New Japan office.

Reviews of other Fantastica Mania 2019 shows and preview:

After his bad performances, Flyer was relegated to the opening match of this show where he barely was featured. Even after being overwhelmed by Gedo and Ishimori, Taguchi opted to make his own solo comeback than give Flyer the hot tag. The young luchador eventually had to get in in order to lose the match, and he did so after showing nervousness and bad timing, finally tapping out to an Ishimori Ankle Lock before he had finished applying it. Poor guy, he has no confidence and looks to be on a level below everyone: maybe being on so many useless opening and segundas matches with awful wrestlers wasn’t a good idea:  a victim of CMLL booking? **

A beautiful fast-paced high-flying lucha fest that kept the Korakuen crowd chanting and clapping non-stop. I loved everything about this: Titán had his best performance of the tour, flying all over the place, using cool kicks and having a fantastic three minute run with Templario, who finally showed some of his talents. Ángel de Oro – who has been consistently good throughout the tour – gave us another confident performance, fluently executing moves, dazzling with nice dives and, as usual, having great exchanges with Cuatrero, who is always good. The finishing stretch saw Titán hit a Quebrada on Templario, leaving the ring to the everlasting Ángel-Cuatrero feud to continue with a perfect blend of quick moves and a nice nearfall where Ángel kicked out of a Spinning Crucifix Bomb, to then spectacularly lock Cuatrero in a Mecedora for the win. Great showing by all four men, but I think Templario could’ve been even better. ****

Ángel de Oro took the mic: “Cuatrero, you know I’m looking to regain the Middleweight Championship you took from me last year at this arena, but that will come in the future. Right now, what matters is tomorrow’s Trios Championship match: Titán and I, next to the legendary Atlantis… we came with thirst of victory”. Titán continued: “You know what? We didn’t want to win those championship at Puebla. Not even in Arena México, not even in my town, Guadalajara. We want to get crowned in Tokyo Japan, in front of all these people.”

More of the same. SHO & YOH have looked uninspired with those masks, Henare and Naito created some hard-hitting fun sequences and, once again, SHO and Shingo made me salivate for their inevitable future singles match. Henare was awesome, and I would love to see him face one-on-one with Naito. However, I felt this was copy/paste of their matches throughout the tour and I couldn’t wait for this to finish. **½

A match that consisted of Liger being overwhelmed by the rudos, Atlantis having some minutes of offense and Atlantis Jr. working hard to overcome the great tag work of their opponents. Mima Shimoda – who’s been very quiet this year – finally entered the ring and got suplexed by Liger. The Dinamitas were good, but a step behind their previous showings: Forastero had an ugly hiccup midway through the match but at least managed to cover himself by shouting like an absolute madman to the poor ref, blaming him for ‘moving the ropes’. Atlantis Jr. and Okumura had an anticlimactic finishing stretch, where the latter pinned the rookie after his twisting neckbreaker. ***

Okumura cut a promo on Atlantis Jr.: “Tomorrow, history will repeat. You are the son of a living legend but I don’t care: I will be your nightmare”. Sansón talked about the upcoming National Trios Championship match: “Atlantis, history will repeat itself for the title match too. You’ll be humiliated before me”. Forastero continued: “Tomorrow, we’ll still be trios champions because Japan is Dinamita territory”.

Atlantis Jr. replied: “Okumura, today you won fair and square but don’t get confident because tomorrow you and me, we go one on one. I will leave my life in this beautiful ring to go home with the victory”. Atlantis started with: “Look, ‘Dinamita territory’, tomorrow Ángel de Oro, Titán and Atlantis are going to become National Trios Champions…”, but got attacked by the rudos before he could continue. Father and son got unmasked in the nefarious attack.

The match was a mess but is definitely worth watching thanks to various spectacular spots. Audaz was great again, executing beautiful dives and even composing himself during a difficult springboard frankensteiner: he’s easily outshined all other Fantastica Mania debutant luchadores. Volador was very entertaining, injecting the match with lightning quick offense and Soberano unleashed his usual array of cool-looking tornillos. We also got an awesome triple tope con giro and beautiful Soberano & Audaz dives during the closing stretch. Carístico used the Mística to submit Volador: it looks like the story of their singles match will be around the lethal submission move. Unrelated: Namajague is having so much fun with this gimmick, he even danced with Cavernario during their entrance.

Unfortunately, in the middle of the match everyone lost their composure and started doing dumb spots, one after another. It was damn weird. But, all the other crazy stuff kind of buried that big crapfest. ***½

Not much to say about this one. Mediocre effort by Terrible, whose offense consisted on strikes, slaps, strikes, a splash and more strikes. Kojima’s machine gun chops were the highlight of the match. I’m happy the feud is over and we can get on with our lives. **

Místico finally outshined his brother with a tremendous performance in what was a great match that I felt could’ve been better. Místico did some spectacular moves, including an electric chair to frankensteiner from the top rope and a incredible tijeras dive from the stands. Dragon and Último had a nice elbow exchange while sitting on the top rope that finished with the former using this trustworthy double stomp for a nearfall, however, these two disappeared for the last minutes of the match that turned into a good Místico/Gran Guerrero finishing stretch that ended with an awesome Mística. The match was fun, it had creative spots and tremendous dives, but it lacked energy and effort from Último to make it truly special. ***¾

Místico took the mic to thank the crowd: “Thank you for always supporting the Muñoz dinasty, specially the Lee brothers. This triumph goes for all of you. I love you so much”. And Dragon sent a message “Hiromu Takahashi, I’m waiting for you.” A simple but awesome line.

Backstage, Dragon mentioned he wants to win another mask and the IWGP Junior Heavyweight Championship. Místico randomly said he wanted an Apuestas match with Mephisto.

Another fun Fantastica Mania show in Korakuen Hall that had three great encounters but also three mediocre efforts. Ángel/Titán vs. Cuatrero/Templario was my Match of the Night: a sweet fast-paced lucha spotfest that I would recommend watching. The main event is also worth your time and you should check out Audaz’ great performance in the fifth match. Chris Charlton and Mavs Gills did a great job on commentary; Charlton was, of course, fantastic adding nice tidbits of information about lucha libre, family and past Fantastica Mania shows: their involvement in the show helped me get more invested in the action.

Tomorrow we have the final Fantastica Mania 2019 show and there’s potential for great things: I have very high expectations for the Trios Championship match (Nueva Generación Dinamitas are my favorite trio in all lucha libre), the Okumura vs. Atlantis Jr. singles match should give us more insight into the young luchador’s development and Carístico vs. Volador Jr. could be very good.