This is the fifth night and second taped show of the Fantastica Mania 2019 tour. These are the results for the non-taped shows of the tour:

Night 5’s card looks good and has the semifinal matches of the Family Tag Tournament with Dragon Lee & Místico vs. Flyer & Volador Jr. looking especially attractive but I’m not expecting any Match of the Year Contenders from this show.

Also, if you want to know more about what to expect in this tour, thecubsfan has a sweet preview for you.

This was similar to the first night’s opening match, but with more action and better chemistry. The luchadores had a diving spot in the middle of the match, Ishimori and Taguchi had some solid interactions with the goal of heating their IWGP Junior Heavyweight Championship match at The New Beginning and the ‘rudo’ team tried to control the match with some fast, nasty tags. This one also had both Mexicans facing off in the closing stretch, with Titán looking good thanks to some high flying moves but ultimately tapping out to Forastero’s armbar. Second win for Forastero using that move on this tour.

A fun opener that showed us another solid display from both Titán and Forastero, with the latter – once again – comfortably adapting to his tag partners allowing more fluidity in the match. **¾

A little something that might improve your experience for this match: SHO is Raijin (orange mask) and YOH is Fujin (green mask).

I would expect that a Roppongi 3K vs. Shingo & BUSHI match would be awesome, but since we’re in the middle of a Fantastica Mania tour and the Roppongi guys are wearing masks, we got something a step below that.

There’s a blooming rivalry between Shingo and SHO (Raijin), and we got more great interactions between them during this match. We also got Fujin in peril, building the drama for the eventual hot tag to Raijin, but it was BUSHI the ‘leading’ man of the Ingobernables team and as a result, we didn’t get the outstanding quality in the closing stretch. Shingo took Raijin out of the picture with a Pumping Bomber but BUSHI wasn’t able to capitalize and got pinned with Fujin’s Casita. The crowd wasn’t too invested in this one and it certainly lacked the color that CMLL has brought to the tour so far. ***

So, SHO y YOH defeated the junior tag champions. Will they get a title shot at The New Beginning? Or was this Fujin/Raijin match non-canon?

I enjoyed the heck out of this match: lots of flips, Ángel looking great, Soberano with another solid performance and Audaz getting some deserved time to shine. I loved Okumura arguing with Namajague and Bárbaro because he wanted to torture Audaz alone, but ended up shouted at by Cavernario because he wasn’t getting the job done. The crowd went alive during a sweet sequence where all three técnicos soared through the air (unfortunately camera missed Audaz’ spot) and that set up a nice finish where Audaz took Namajague out with a Fosbury Flop, Cavernario hit a tope on Ángel and Soberano pinned Okumura after a tornillo and a cool moonsault. ***½

This match didn’t do much to heat the upcoming Kojima vs. Terrible singles match, focusing instead on giving Henare the spotlight to build his underdog status. The New Zealander looked sharp facing off with Naito and even used a standing moonsault to get into the Fantastica Mania mood, but of course, he got pinned after a Styles Clash by Terrible. I like Terrible, he’s a good fit in Los Ingobernables and he’s good at strike exchanges, but there’s not much more to say about him. The last third of this match was good, but everything else was a bit dry: Henare was the definite highlight for me. ***

A short, weird match with some comedy, Carístico running around trying to get a chant going and a disappointing lack of Templario solo action. Último pushed the match with his tremendous charisma and had some entertaining exchanges with a grumpy Tiger Mask. Carístico scored another win with La Mística (this time Templario was the victim): smart move to, once again, build it as a killer weapon for his upcoming singles match with Volador. **¾ for the match and a solid ** for Carístico’s dubbed theme.

Atlantis Jr. gave us another solid performance, looking comfortable in the ring, selling well for the Dinamitas and not missing any spots. The highlight for me here was the great tag team work between Cuatrero and Sansón, who made sure to cut Atlantis Jr’s wings by ganging up on him. Atlantis worked hard to help his son, but unfortunately looked hurt after a dive from the top rope to the floor.

Some portions of the match didn’t work and I felt they dragged it a little, but overall this was a fun match that ended with Atlantis Jr. getting pinned after receiving a Sansón Special. ***¼

Dragon and Místico work really well together and they gave us another entertaining performance here, but I feel this was just a warm-up for the finals of the tournament on Friday. Dragon Lee and Volador had great exchanges and the match had a nice pace that unfortunately became uneven when Flyer started getting nervous: the young luchador showed inexperience, looked far too hesitant and ended up making a mess of the last third of the match. After a woeful sequence, Dragon pinned Flyer after a Desnucadora. ***¼

Sansón and Cuatrero showed up to cut a little promo: “I’m happy you advanced to the finals. The Muñoz and the Dinamitas have a score to settle… and that will end right here in Japan. See you this Friday at Korakuen Hall.” Dragon Lee replied with “Sansón, Cuatrero… all these people are here to see these duels. The Muños Dinasty just advanced to the final. I’ll see you this Friday at Korakuen”. Yes, nothing too exciting.

Night 5 was a step above Night 1 in terms of overall quality, with strong showings from people like Soberano, Dragon Lee, Místico, Atlantis Jr. and the Dinamitas. If you want to see some high flying action, I’d recommend watching the Audaz/Soberano/Ángel vs. Namajague/Okumura/Bárbaro match but if you’re short on time, there’s nothing must see in this show.  Atlantis Jr. has been the most interesting luchador of the tour, impressing with solid, confident performances and making me look forward to his next showings in Japan.

Both Soberano vs. Bárbaro and the Tag Tournament Final should be great on Friday, plus there are more matches to be announced, so I’d recommend you to be on the lookout for that show. 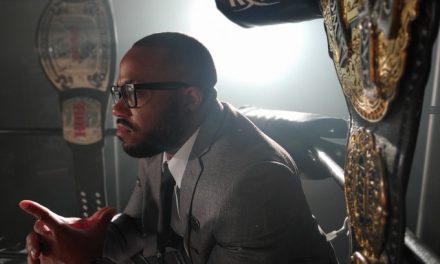