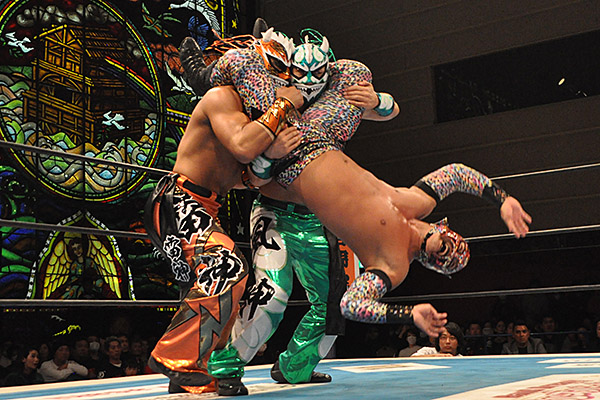 Fantastica Mania has returned to NJPW for a ninth year, yet it doesn’t feel quite the same. A brute force way of looking at the problem is the number of singles matches scheduled for the tour ending Korakuen Hall shows compared to the last few years:

It’s a bit of a cheat. The lineups for the two of the shows are not completely fully known, dependent on the outcome of a tournament. It’s possible one or two more 1 vs. 1 matches will be added, though that’d be a surprise given the rest of the lineup. Tag teams and trios matches are the backbone of CMLL and can be great, but ones are thrown together with little feeling rarely are special. The one special trios match includes a wrestler who will dramatically limit it. The annual match celebrating the Japanese/Mexican partnership has seven Japanese and one Mexican. These cards are not bad, but they’re far from Fantastic from a CMLL standpoint.

This tour is probably being skipped by most NJPW focused viewers. That’s a bit of a shame since it seems more aimed at them than usual. Some variation of RPG2K versus LIJ headlines most of the tour. Suzuki-Gun members are present for the first time ever. Except, they won’t be quite as usual. SHO & YOH will wrestle under masks as Raijin & Fujin, while El Desperado returns to his Namajague identity. It doesn’t really make sense for someone who follows CMLL: Raijin & Fujin never were actually masked while in Arena Mexico, while Namajague famously lost his mask in that promotion. This is NJPW trying to embrace a spirit of “lucha libre” than being all that concerned with the reality of CMLL

The tour started Friday night with a show in Osaka, notable for Atlantis Jr. making his official debut and almost nothing else. NJPW added a broadcast Wednesday from Chiba this year, which made a lot more sense when it was explained to be the first round of a tag team tournament. There’s no great need to watch either of the non-Tokyo shows, but the Chiba show seems like the one to be more likely worth your time.

The shows in Tokyo begin Friday morning. NJPW’s offered Spanish commentary for the final day for the tour the last couple of years. This time, they’ll have English commentary for the first time for the final two shows. Mexican wrestling companies have generally and hilariously failed at matching their product with someone who can explain to an English language audience, but perhaps a Japanese company will do better.

(four matches to be added)

NJPW viewers weren’t so excited to see Soberano after his 2018 performances, but he seems destined for may return visits at CMLL representative for years to come. This match will go a lot to determine where he slots in among the Mexican hierarchy. It’s been years since Cavernario has been used in NJPW outside of these Fantastica Mania shows, but he’s been presented as one of the big stars of CMLL every time in he’s in Japan, more so even than in Mexico. Soberano getting a win here would suggest very big things for him to come in 2019. This is a rematch of an outstanding match from March and is the betting favorite for best match of the tour.

The CMLL Family tag team tournament final shouldn’t be far behind. Atlantis Jr. & Flyer are obvious pin-eaters in the first round matches. That leaves a Cuatrero & Sanson versus Dragon Lee & Mistico final, a battle between four of CMLL’s young stars who figure to keep running into each other for as long as they’re in CMLL. Mistico finds his best success in Mexico as a tag/trio matches and should excel against NGD, CMLL’s best unit. It’s a little disappointing Dragon Lee is not getting a singles match of his own, but he tends to make the most of what they give him on these shows.

(four matches to be added)

The winner of last year’s tournament brothers tournament were the Guerreros. They defeated Dragon Lee & Mistico to win that tournament. They’re facing the winners of this year tournament, which sure appears to be Dragon Lee & Mistico. (They’re facing off constantly in the lead up to this match.) That was a pretty good match and this should be the same, but the teased repeat is another reason the excitement for these shows is a bit muted. An all NJPW semi-main does the same; couldn’t Titan or Angel de Oro or anyone from CMLL be placed in Henare’s spot for even a single night in these run of shows?

Kojima was put out of action after suffering a knee injury during this tour last year, then exacerbating it against Rush in a singles match. He’s back this year to finish better and get a little revenge against Rush’s partner Terrible. It should be fine, nice that Terrible is getting the chance, but it seems unlikely to amount to much. Terrible’s only other singles match in a NJPW-affiliated show was facing Strong Man on a Bad Luck Fale produced show; at least this sounds more promising than that.

Volador and Caristico is a legitimate big match. It is the guy who was the top guy in CMLL (and Mexico) against the guy who eventually replaced him as the top guy in CMLL when the first guy left. Volador & Caristico had a very hot and just as unfinished rivalry in the last year before Caristico left to CMLL; Volador getting every big win in that feud likely played in a part in Caristico deciding the time was right to leave. They’ve had four matches in Arena Mexico since Caristico has returned to CMLL shows. Caristico’s won twice, Volador’s twice. Not all wins are created equal though, and Volador’s wins have come in the bigger moments.

The match should be a big deal to Japanese fans and it makes total sense to have it on a Fantastica Mania. The problem is an overall sense of Volador fatigue. It’s year five of Volador being the top tecnico in the promotion, and the act needs something new to it. It hasn’t helped that CMLL’s overused him in televised singles matched in recent years, but he’s also stopping growing as a luchador. His matches seem to be lesser repetitions of his highlights from the past, more out of disinterest than physical decline. Volador seems both a bit bored with the matches he’s having, yet not interested in doing much else. It’s not a great situation.

The semi-main is a match based off the “My Father is a Heel Wrestler” movie, which surely will bring great merriment to the NJPW fans but doesn’t really hold any interest from a CMLL standpoint.

Brothers Dragon Lee & Mistico teaming up with Soberano against the Guerreros & Namajague should be good fun. Perhaps it’ll bring back some of the past Desperado/Dragon Lee issue. NGD was the best trio in CMLL in 2018 and deservedly are getting a spotlight title defense as a team on the final night. They also deserve slightly better competition: Titan & Angel de Oro should be great, but the match will have to be worked around Atlantis’ limitations. Hiding Atlantis in the LIJ tag, moving Henare up to the fifth match, and putting Soberano against his usual Dinamita rivals would’ve been a much more palatable setup. As it is, it’s going to be hard to care a third straight show of the same basic LIJ match.

Atlantis Jr. getting his first singles match will be the best window yet into his progress. Okumura’s solidly midtable in CMLL, around the position Atlantis Jr. figures to start in. A win is not of the question and would get him off to a fast start. This show itself will get off to a fast start, with four wrestlers way too talented for a spot that usually only gets about six minutes. They’ll probably squeeze in twelve minutes in that time.

These Fantastica Mania tours seem bulletproof. The early tour shows have done around the same attendances as previous years, even without Tanahashi & Okada being part of them. There’s also so much CMLL talent involved that there’s inevitably going to be a few great matches by the time the Korakuen Hall shows have finished.

Still, this is the most loaded roster CMLL has sent to Japan and yet has one more the more disappointing lineups. Perhaps there will be some pleasant surprises when those final matches are added, but it shouldn’t take last minute changes to make this more interesting. 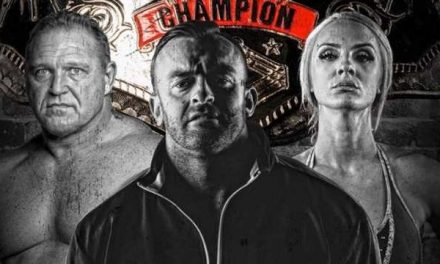