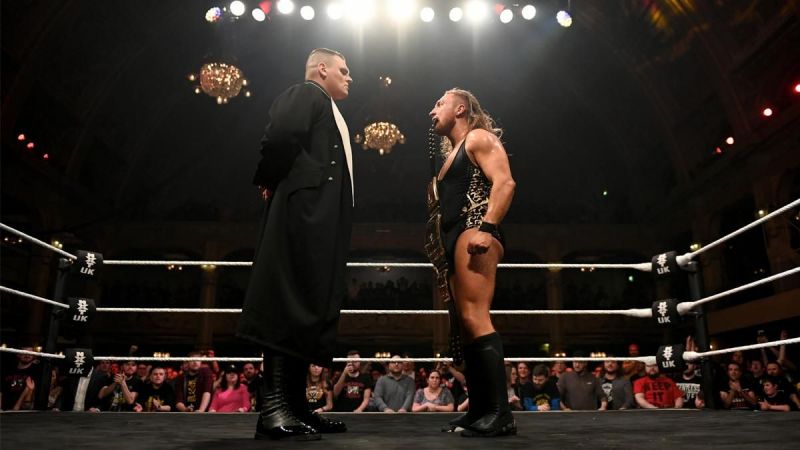 The first NXT UK TakeOver hasn’t had the greatest build but all of that goes out the window now. The Blackpool show is headlined by the crowning of the inaugural NXT UK Tag Team Champions and Pete Dunne versus Joe Coffey for the WWE United Kingdom Championship.

This was the perfect match to open the show. Nobody is as popular in NXT UK as Moustache Mountain whereas Gibson & Drake are yang to Moustache Mountains ying as they are thoroughly unloved. When Moustache Mountain made their entrance in their British Bulldog inspired attire the reception they received was eye opening. Early on Gibson and Bate matched each other with some good old fashioned wrestling but the match would pick up when Seven was busted open on the back of his head by a James Drake elbow. Accidental blood is always welcome and the sticky red blood mixing in with Seven’s white hair created a cool visual.

Tyler Bate proved just how much of a B I G S T R O N G B O I he is when he airplane spun both Gibson and Drake at the same time. The second half of the match provided plenty of drama and nearfalls with two of the best almost resulting in Gibson and Drake walking out as champions. A Helter Skelter by Gibson followed by a 450 on Seven by Drake had everyone on their feet and when Seven was locked in the Shankly Gates by Gibson I genuinely thought he was about to give up. Seven’s injured arm would be the downfall for Moustache Mountain as he couldn’t quite hook Drake on their trademark rebound lariat dragon suplex combination and Drake was able to survive the pin. Drake would take out Tyler Bate moments later with a suicide dive that doubled as a doomsday device as Bate was on Gibson’s shoulders outside the ring. A Ticket to Mayhem on the injured Seven in the ring and Gibson & Drake are the inaugural NXT UK Tag Team Champions. ****1/4

We then go to a recap of Jordan Devlin jumping Travis Banks when he was arriving at the building earlier in the day. Devlin would injure Banks’ knee and this would lead to their scheduled match not taking place as prior to a bell ringing Devlin would withstand a brief onslaught from the Kiwi Buzzsaw to go on and destroy his knee on the ring steps. This was however just an angle to get us to our next match

The battle of the two Irishmen, teacher vs student, Balor versus Devlin, a match that some fans have wanted to see for quite some time and ultimately… it was fine. Both men worked hard and tried to give the match some juice but really it felt like an exhibition match with no stakes. Devlin deserves better than this and he could be a major star on NXT UK so to see him get pinned on the first TakeOver in an unadvertised match was quite strange.

The action was good and it felt like a really good RAW match. They worked at a quick pace and the fans were definitely into the match. Finn would score the pin after killing Devlin with his signature moves the Bloody Sunday, a shotgun dropkick and a Coup de Grace. I guess this was supposed to be a WWE MOMENT™ but it just felt dry and unimportant. ***1/2

This was the best built match on the whole show. Dennis and Mastiff have been at each other for weeks and with the added No DQ stip this was sure to be a war! Apart from that it wasn’t. It was the usual WWE Extreme Rules/No DQ match with a dozen kendo stick shots, a chair being involved briefly and a table perched ominously in the corner. Forget Slam City, this was trope city on the WWE Network.

The match wasn’t without its highlights. Eddie Dennis showed incredible strength to not once but twice lift Mastiff into position for a Splash Mountain Bomb. Mastiff displayed his incredible agility to pull off a flawless double jump springboard moonsault that Dennis would avoid. Mastiff would survive a Next Stop Driver from Dennis and put the Welsh Headmaster away with a running cannonball splash through the previously mentioned table. I would have expected an Eddie Dennis victory so I am intrigued to see where both men go from here. ***1/4

This was a rematch from the finals of the NXT UK Womens Championship tournament. Storm earned her shot by winning the 2018 Mae Young Classic. Rhea has been a revelation as champion and despite being a relative rookie she has carried herself like a giant in the NXT UK Women’s division.

Rhea would control much of the early going to set the table of Toni fighting from underneath. They really played on the fact that in their first match Rhea physically dominated Storm and it appeared like that was to be the case once again. Again playing off their brief history both women would counter out of the others finisher attempts. Toni would survive the Riptide from the champ and Rhea would barely kickout of the Strong Zero. It was obvious that whomever hit the next big move would win. Storm would slip out of another Riptide attempt and screaming using her last bit of effort a Storm Zero would put Ripley down and give us a new NXT UK Womens Champion. This felt like a huge moment and Ripley sold it magnificently with a look of anger, disbelief and even respect as Storm celebrated. ***3/4

All of that said this is one of the worst matches I have ever seen on WWE TV. This match was so slow and the crowd so quiet that I swear they all went for a collective nap. Nobody in attendance seriously bought that Coffey could end Dunne’s 600+ day reign as champion. This was dull and even worse it was sloppy. They appeared to have absolutely zero chemistry. I wouldn’t normally point this out but there was some of the most spot calling I have ever seen. It was so so bad. Worst of all it was incredibly long, going over 30 minutes.

Dunne did his best to get the crowd back about 20 minutes in when there was a tonne of finisher spam from both men. Incredibly the crowd started a “This is awesome!” chant when it most certainly wasn’t. The match just continued to spiral downhill when they twice attempted something from the top rope and seem to botch it badly both times. After yet another Bitter End kickout, Dunne would lock in a finger submission with an armbar to secure the win. *

That wasn’t the end of the show though as WALTER would appear during Pete’s celebrations and the Ring General would confront the champion. Coffey would attempt to get back into the ring to be a part of the stare down only to be murdered by a massive boot from WALTER. Pete Dunne vs WALTER is definitely a match up that has my attention.

Up until the main event TakeOver: Blackpool was a perfectly fine show with two good matches, one very good match and a great opener. The show was let down by the main event that tried to be epic but was really just an epic fail. The WALTER appearance softened the blow of such a bad main event and Dunne versus WALTER is a big time match so maybe everyone will forget Coffey versus Dunne; I sure hope I can forget it.