Blood on the Mat, Smoke in the Air: Remembering Chono vs. Onita 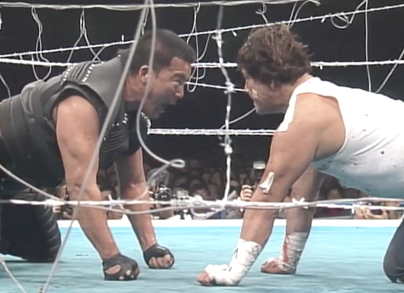 The ring, dressed with barbed wire dangling like spider webs, awaited its combatants. A pair of referees wearing safety goggles stood waiting at ringside. Red and blue lights lay dormant atop the ring posts for the moment. Soon, they would flash as a siren squealed throughout the Tokyo Dome. The strange and unsettling scene would only grow more so as the night went on.

Masahiro Chono vs. Atsushi Onita was a Charles Bukowski poem in a wrestling ring—raw, crude and memorably disquieting. Blood and bombs, atmosphere and anticipation made for a work of art curious fans still admire some two decades after it happened. It is neither the greatest nor the goriest of deathmatches, but for some fans, instead, it is a gateway drug to that subgenre of the wrestling medium. It’s the kind of bout that inspires a fan to scour the internet for Onita’s catalog of brutality, for all the barbed wire match is capable of, for other clashes where explosions boom as two wrestlers bash into each other.  New Japan Pro Wrestling is known for the strike-heavy, ultra-realistic strong style, not hardcore wrestling’s blend of fisticuffs and injurious stunts. But in 1999, the company briefly veered from tradition thanks to a madman in a leather jacket.

Onita invaded NJPW in pursuit of a match with the retired Riki Choshu. The three-time IWGP heavyweight champ had moved into a booking role at the time, but the snarling Onita wanted him back in the ring, in the throes of barbed wire. After spending much of the decade with Frontier Martial Arts Wrestling (or FMW), Onita brought his hardcore sensibilities to his own promotion (Onita Pro), in addition to brief tenures with ECW and Wrestle Association-R, before finally showing up in New Japan with cocked fists at the ready. The brawling vagabond’s bouts often drifted into extreme violence. Brass knuckles, barbed wire and baseball bats were familiar weapons for him. He was in the midst of crafting a fresh path for wrestling, one that built on the legacies of hardcore pioneers like The Sheik and Terry Funk. As David Bixenspan put it for Deadspin in 2017, “Onita, took indie wrestling to a level that has never been topped before or since, inventing a new, particularly violent and theatrical kind of wrestling in the process.” That brand of the medium was on display at NJPW Wrestling World in the Tokyo Dome on Jan. 4, 1999 when Onita singed Kensuke Sasaki’s face with a fireball. The act earned Mr. Onita both a disqualification and a seething hatred from the fans.

When Onita sauntered to the ring three months later in the Tokyo Dome to face Chono, that hatred pulsated through the building.

The audience pelted garbage at the grinning, chair-wielding heel. Onita, with a bandage stuck to his forehead and a cigarette tucked into the tight teeth of his big grin, soaked it all up. He swung a steel chair at his side and offered the 60,000-plus in attendance a long look at his middle finger. Chono’s path to the barbed battlefield was equally as entertaining. The mulleted, broad-shoulders former NWA world’s champ rolled up in a black Hummer, clenching a cigar in his mouth. Onita donned a torn white shirt, his hands covered in tape; Chono opted for a leather vest and fingerless gloves. Each man, the epitome of 90’s cool, each man seemingly pulled from a John Woo film. The entrances alone are worth diving into the NJPW World archives to find this match.

And while the ensuing action would underwhelm in some ways, the power of these two magnetic personalities made sure this moment was memorable, that it seeped into the audience’s skin. Ring of Honor wrestler Cheeseburger was spot on when he tweeted in 2014: “Chono and Onita had charisma for days.”

Much of the early part of the match saw Chono and Onita approach each other and their environment warily. As they traded blows, they made sure not to be pushed to the ring’s ominous edge, stopping themselves just before flesh met barbed wire. They looked like two mountain lions attempting to shove each other off a cliff. They teetered near the pointy metal, the explosives that encircled them. Like a good horror movie, suspense built.

Eventually, Chono flung a steel chair into the corner, an errant toss that showed off the power of the bombs. Sparks shot up. Smoke billowed. The crowd gasped in unison.


The madness had truly begun.

The fight continued as part brawl, part special-effects display. On the mat, the men doled out bulldogs and gut-punches. On the ring’s edge, the booby-trapped enclosure sparked and spat, the explosions taking every man, including the referee, off their feet. A run-in with the barbed wire left a lengthy, ugly gash on Onita’s arm. Blood dripped down his limb and smeared into the mat to make the beginnings of a Rorschach test.

Onita and Chono ended up on their hands and knees at one point, barking at each other, ready to butt heads, two vicious dogs snapping at each other in the corner of a scrapyard. Enduring images like these were more important than the actual wrestling. The warriors facing off on all fours, Onita’s bloody arm, the barbed wired ring itself, it was all a theatrical showcase of masculinity and aggression, a gunslinger’s duel in an unfamiliar setting.

This duel, though, ended with no true victor with both Onita or Chono unable to stand before the referee’s 10-count. An explosion left them dazed. Their fighting had left them drained. Here, the wrestlers were two battered animals splayed out on the forest floor, neither the predator that day. Before the two wounded men limped off the stage, Chono slipped Onita’s jacket onto him, forcefully, begrudgingly. The outsider had earned his respect.

Onita vs. Chono was no 60-minute saga of a match, no work rate classic. In fact, one only had to wait until later in the show for Koji Kanemoto and Shinjiro Otani’s singles bout to top the opener in terms of match quality. But it’s not Kanemoto vs. Otani that people remember from that crisp Tokyo night. Instead, it is the 16 minutes and 10 seconds of carny violence, the indelible blend of spectacle and bloodsport that was Onita vs. Chono that sticks with us. 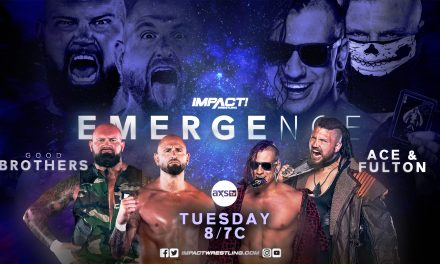 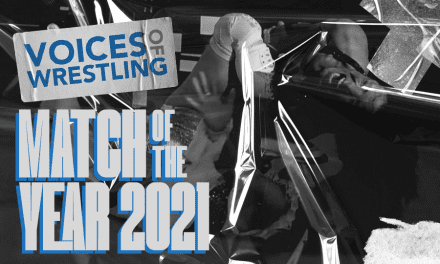 Beyond the Top 10: Separating the VOW MOTY Poll Into Tiers of Greatness