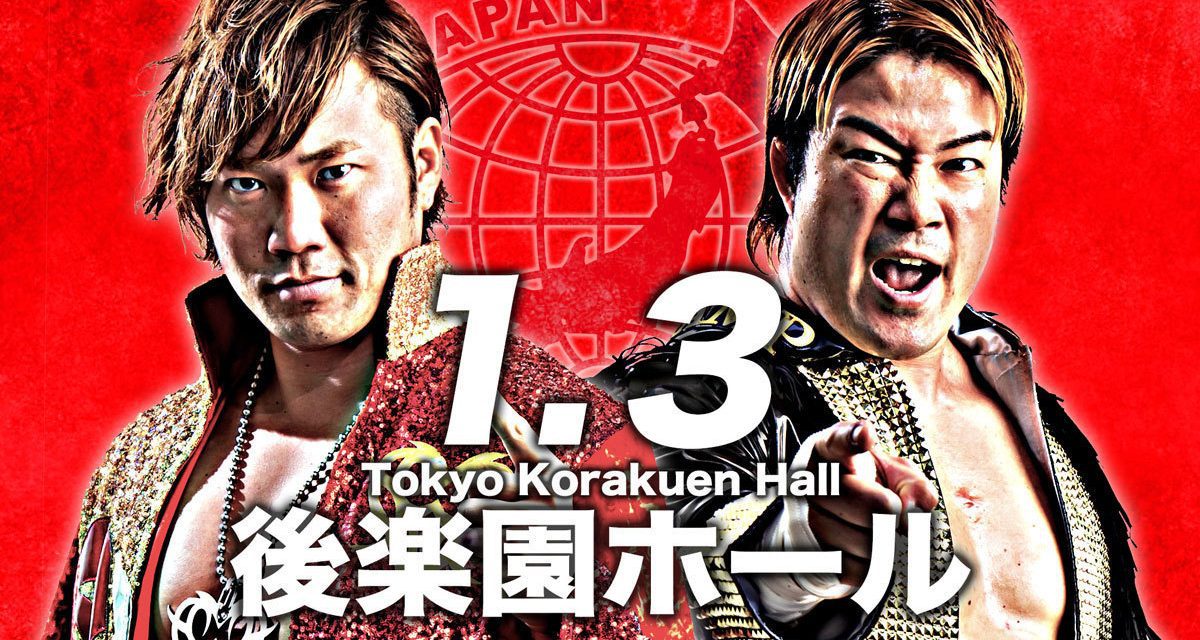 Today’s crowd looks larger than yesterday’s which is always a great sign.

Hell yeah, an All Japan version of a Young Lions match.

According to the screen graphic in Korakuen, Tamura is going by Dan as his first name.

The rookies Aoyagi and Tamura start the match with some mat work. Omori is then tagged in. Aoyagi and Omori tease they don’t like each other.

Aoyagi despite debuting yesterday, ekes out a strike exchange victory versus Omori. They then act like they now have a personal beef which leads to being tagged in Tamura and the match really picks up.

Tamura and Aoyagi show some great chemistry back and forth. But Aoyagi eventually gets the tag to Okada.

Tamura manages to get an upper hand briefly and hits Okada with a dropkick from the second rope.

Soon after a missile dropkick from the top rope misses and Okada hits a vertical suplex for a near fall, and follows up with a crab hold. Tamura manages to tease getting a rope break before Okada then drags him back to the middle of the ring for the tap out. ***¼

This was a really fun match. Tamura was the young boy stand out. Aoyagi and Omori continued to get in each other’s faces and shove each other after the match. Looks like this will be the opening match feud going forward, which I am not complaining about.

In the biggest news in the wrestling world in 2019, Sato is finally wearing boots.

This was tonight’s comedy match but compared to what came the night before this is a match of the year.

The early exchanges involve Nishimura, Sato, and Yoshitatsu. They are not bad at all. Fuchi eventually gets tagged in against Sato and the fun begins. Sato gets heat for kicks on Fuchi. Fuchi then manages a Baba chop and some delayed body slams and closed fists to the head for good heat.

Everything Fuchi does get some kind of heat including boos when he misses a dropkick on Sato.

The end even manages to get a lot of heat because it is a sequence where Nishimura and Fuchi are reversing each other’s small packages but Sato then intervenes to tip the scales to Nishimura which elicits boos from the crowd. This was a much better comedy match than anything from the previous night’s show. ***

After the match, Nishimura cuts a promo that gets a lot of laughs from the crowd.

This match immediately made me realize that his show could not be worse than the night before.

Lots of sweet stiff strikes between Zeus and Sai early on in the match.

The match then builds to heated exchanges between Lee and both Akiyama and Zeus. Lee has looked pretty good both nights in tag matches even though he mostly stood around in last night’s battle royal.

We eventually reach Maruyama vs. Iwamoto and it goes mostly how you would expect. After both teams intervene to clear the ring at different points in favor of their Jr. Heavyweight, Iwamoto lands a STO followed up by his Judo throw finisher for the pin. ***¼

After the match, Lee and Zeus have a staredown that leads to a shoving match that has to get broken up a couple times.

A solid match the builds to an important upper midcard match in an attempt to build a new star. What more do you want?

Given the sizes of five of the six participants in this match, I am still going to call this a hoss match. And hoss it did indeed.

Aoki starts for his team, and is beaten up with lots of body slams by all of the members of the gaijin team for the first few minutes of this match.

Aoki doesn’t manage to get out of the ring until Suwama gets into the ring to allow the tag to Ishikawa.

From that point on, it is all Ishikawa and then Suwama on offense. The stand out of the match is James who did some great hoss work against both Ishikawa and Suwama in the latter half of the match.

Valletta ends up in the ring for the gaijin and the Violent Giants assist Aoki with a tope suicida on to Doering and James which then allows Suwama to hit a backdrop on Valletta for the win. ***¼

Not going to lie, it’s been a long time since I’ve watched a Minoru Fujita match. He looks old. That being said, he wasn’t the problem with this match.

I toyed with the idea of giving the match a gentleman’s ***. The work was solid.

However here’s why I didn’t.

The mat work was slow. I don’t hate extended mat work sequences but, it’s clear that Tajiri can only do them at a certain speed.

On the plus side of this match, I think it did have a great build. But the problem is, in this day and age, when we are expecting a big spot that kicks the match into high gear, it is rather underwhelming.

Again, I can’t totally shit on this match because the work was competent, but the ending sequence that soured me on a gentlemen’s *** involved TAJIRI ending up with this weird bag that Fujita wears in his entrance on his head. Fujita goes to the top rope, the ref removes the bag from Tajiri’s head then as Fujita goes off the top rope, we get the mist spot, roll up, for the pin. **¾

Time to take the TV title off of TAJIRI especially given the young talent in this promotion that needs to be elevated quickly.

In my review of the previous night’s show, I said I was still high on All Japan but had some misgivings. This match went a long way in reassuring me that in 2019, All Japan will rock.

Yohei Nakajima is a billion times more charismatic as Black Menso-re and this match proved it. Early on he was able to get the crowd to pop for his schtick.

Going off of the previous night’s result, a lot of this match was Nomura vs. Omori. And when this match kicked into high gear it was after Omori hit a piledriver on Nomura on the ring apron.

Aoyagi then gets involved hitting a German Suplex on Omori which allows Nomura to go back on the offensive and hit a German Suplex of his own, then a Spear and a Death Valley Driver to get another pin on Omori.

While I thought Nomura pinning Omori the night before was going to lead to a different ending, getting two wins over Omori back to back only further solidifies Nomura’s climb up the card. Kicking out of Omori’s finisher twice in a match also means a lot. This was a great match that saw everyone work hard even if Aoyagi and Black Menso-re were not the focal point. ****¼

When I got back into All Japan in 2017, I thought Nomura was the next big thing after Jake Lee. Then thought it was going to be Aoyagi, but I am back on the Nomura train after these last two nights.

Miyahara enters first and gets the biggest pop of the night.

I, like many people, have always thought KAI was incredibly inconsistent, but after watching this match I have to give him all the respect in the world.

Building off of their exchanges last night, the match begins with some chain wrestling sequences.

After fighting on the outside, Miyahara goes for a knee but KAI moves out of the way leading to a nasty crash into the ring post. KAI then goes to work on Miyahara’s knee.

KAI acts arrogantly and works the crowd while he goes after Miyahara’s knee.

Miyahara is no slouch in selling the seriousness of the match. He even whips out a couple of nasty looking headbutts to help him regain control of the match.

Miyahara is so angry at this point that he puts KAI in a sort of cross face where he wraps his arms around KAI’s head and the ring post as he stands on the outside. Miyahara his slow to let go of this hold and Kyohei Wada has to break it up himself to a big pop.

KAI works over the leg some more, even hits a tope suicida but back in the ring, he attempts a move off the top and Miyahara goes for a powerbomb.

KAI goes for a Frog Splash but Miyahara gets his knees up. A vertical suplex on KAI gets only a one count!

After a lot more knees, Miyahara eventually gets a deadlift German Suplex for a 2.9 count. That is followed up by a Shutdown German Suplex that KAI beautifully tries to resist by trying to keep his arms from being locked, and once they are, trying in vain to kick at Miyahara’s legs to stop the move. However, it’s not enough to stop Miyahara, after a struggle from landing the move for the win.

I’m not sure how many people expected a match of the year candidate in 2019 before Wrestle Kingdom 13 happened. And while I have been critical of KAI before, he gave us an incredible performance and the crowd in Korakuen could tell. While Miyahara did his thing and did a great job selling, this match wouldn’t be what is was without KAI. This might get me in trouble, but I thought this was better than Miyahara vs. Zeus from October. ****¾

On his way to the back, KAI gets loud chants from the crowd. Miyahara then cuts a long promo in the ring where he does a lot of yelling but the crowd is very into it.

The contrast between this show and yesterday’s show is wild. Goes to show that All Japan can put on a great show top to bottom with the right kind of booking, especially on the undercard.

And they have also done all the right things to move forward. We’ve got a big match with Lee vs. Zeus coming up. Nomura looks to be set for big things this year. And the rookies are looking solid and already building feuds amongst each other.

All Japan isn’t guaranteed for success in 2019, but I think they have gone a long way to prove that they have a decent chance in making 2019 a bigger success than the year before. 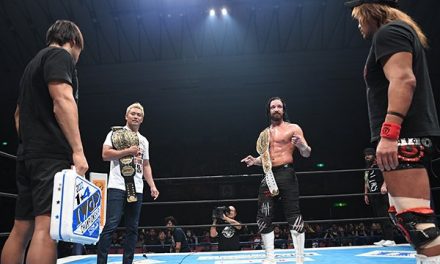 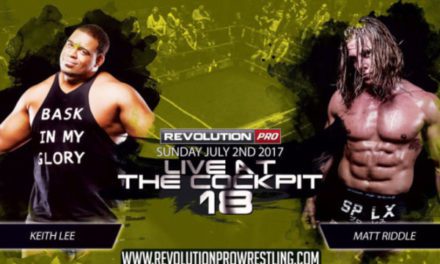 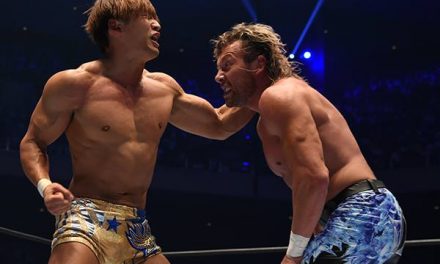