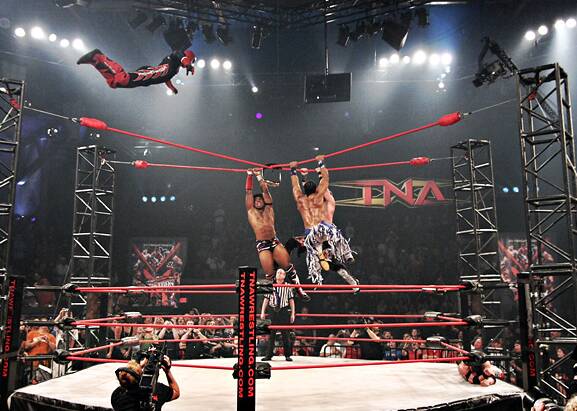 On Sunday, January 6 Impact Wrestling returns to their spiritual home of Nashville, Tennessee and they’re bringing their most iconic match with them.

The 42nd Ultimate X match will take place on that Homecoming pay-per-view, with four men battling it out for the vacant X-Division Championship. After this week’s episode, we now know the first two participants of that match – Ethan Page and Jake Crist.

With that in mind, I thought it’d be useful in this week’s column to do a recap of the death-defying stipulation’s history.

The Ultimate X match is something that has been synonymous with Impact for almost the company’s entire existence, with the first one taking place in August 2003. Current Impact supremo Don Callis has been the one recognized on-screen as the brains behind Ultimate X and the first iteration saw Michael Shane win the X-Division Championship against Chris Sabin and Frankie Kazarian.

The first four Ultimate X matches were held in Nashville, but January’s contest will be the first in that venue since July 28, 2004 and the first in more than 18 months, with Low Ki defeating Andrew Everett and Trevor Lee in the most recent Ultimate X in May 2017.

Over the years there have been several variations on the basic Ultimate X theme. AJ Styles and Christopher Daniels defeated Homicide and Hernandez for the NWA World Tag Team titles in 2006, whilst Daniels defeated nine other men in the first-ever Gauntlet Ultimate X match at Victory Road in 2007.

The winningest competitor in Ultimate X history is Chris Sabin, who has come out on top eight times, and he also holds the record for appearances, having been in 17 of the 41 matches to have taken place thus far.

Daniels and Kazarian are next on the list for appearances with eight, with Daniels also second on the all-time victories list with five. The record for most unsuccessful appearances is held by Sonjay Dutt, who has been in five Ultimate X matches with nothing to show for it.

As well as being a treasure trove for statistics anoraks like myself, who enjoy spending countless hours looking at the random competitors and victors over the years (e.g. Rockstar Spud, Volador Jr, Naruki Doi and Abyss, to name a few), Ultimate X is famous for its incredible highspots over the years.

Who could forget AJ Styles’ memorable Styles Clash off the top of the structure?

Or Daniels executing that moonsault?

When it first came out, Ultimate X felt special. It was something unique to Impact Wrestling and was a brilliant way to showcase their tremendous roster. However, as with most stipulation matches in American wrestling, it has been overdone as a cheap pop for the live crowd and that has seen its novelty wear off. Regaining that uniqueness is incredibly important, and it appears that Impact is on the right track for the forthcoming match in January.

Instead of it feeling shoehorned into the PPV to sell a few more tickets, Ultimate X coming back feels natural and logical. Brian Cage’s decision to exercise Option C to face Johnny Impact at Homecoming left the belt vacant, and there was no obvious hierarchy or top contender, so a tournament or a match like this makes sense. Add to that the likelihood that all four competitors in the match will be first-time competitors, and you’ve got a recipe for something exciting and something fans can genuinely get invested in.

Ethan Page is a surprise inclusion for the match because of his size and strength, but that adds a different layer to it. Jake Crist does very little to move my needle, but as he’s proved with OvE, he’ll take the big bumps so his entry will allow for some more of those memorable moments to be created. The other two qualifying matches will take place next week and see Rich Swann go up against Dave Crist and Trey Miguel face Trevor Lee.

Lee’s departure from Impact following the recent tapings and rumored move to the Largo loop makes Miguel an obvious pick and an exciting one. He’s the least well-known of The Rascalz to Impact fans, so this will give him the chance to shine. As for the other match, it’s highly unlikely that there’ll be two Crists in the match, and Swann is the biggest star, so we’re logically heading towards Jake Crist vs Ethan Page vs Rich Swann vs Trey Miguel. That’s a match that’s new, different and one that’ll reset the X-Division title picture.

I have always loved Ultimate X, and its lengthy absence has certainly made this heart grow fonder. Now it’s time to bring it home.

Consequence + Mark Crozer “The Making of The Whole World”