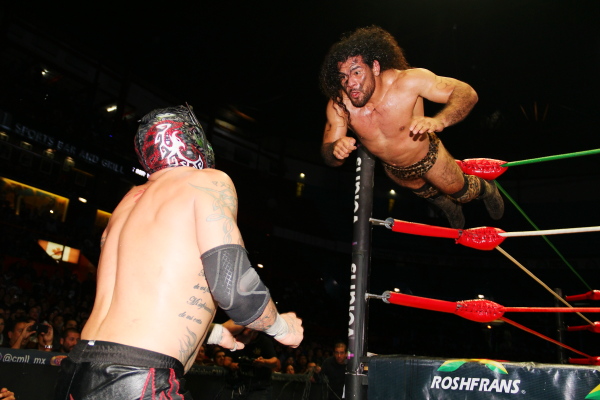 This show was a celebration of Máscara Año 2000’s 40-year career in wrestling. Máscara Año 2000 is brother to Cien Caras, was part of the legendary Hermanos Dinamita team (also known as Los Capos), has been in over 20 Lucha de Apuestas matches and even has a ranchero music CD as a singer. The man is beloved in lucha culture and this night he would have the chance to team with his nephews Sanson, Cuatrero and Forastero to face the Guerreros Laguneros team in front of a good turnout in Arena Mexico.

But this wasn’t all about Máscara Año 2000 because tonight we would also get a highly anticipated match between Bárbaro Cavernario and King Phoenix (that’s Fénix) in the Leyenda de Plata tournament final that looked like it could blow the roof of Arena México. Spoiler: it did.

The show started with a solid match that could’ve been pretty forgettable if Super Astro Jr. hadn’t done so many fun stuff: the guy was all over the place trying to get the crowd going and succeeded a couple of times. Luckily, Espanto and Akuma (the rudos) were pretty consistent throughout the match and even pushed the tecnicos to have a nice showing. That’s something you might not always see from them. **½

I would love to give you a detailed report on Kawato’s performance here and compare it to his disappointing year in CMLL but he was just average and didn’t impress in any way or form. And to be honest, the entire match was average. The third fall had some fun exchanges and nearfalls but I can’t remember any big highlights from it. For some reason, I find that Black Panther and Blue Panther Jr’s matches are always lacking when they’re not with their father, almost as if they need his guidance to build an engaging match. **

I love Titán and I wish CMLL would love him as much as I do because he’s so damn underutilized in this company. Thankfully, he had the chance to shine this night and while he didn’t light the world on fire, he had good chemistry with his partners and helped create a really entertaining match. We got some awesome dives by Titán and Soberano, and nice heel work by Dark Magic, who had the ladies screaming in my section. I’ve enjoyed watching Dark Magic live: he’s not an incredible wrestler, but he has swagger and a great physique, which has helped him get over with the fans. Unfortunately, he looked injured after the match. Titán got the win for his team with a modified armbar that looked so flat that you could see him shaking his head in disappointment while applying it. ***¼

This was a very sloppy match and one of Penta’s weakest showings in CMLL and 2018. I liked that everyone took risks and tried some creative spots but unfortunately, the execution wasn’t the best. The timing was all over the place, there wasn’t pace and Penta kept missing spots (he even failed to catch a Místico dive). I think the rudos were at fault for this one because the tecnicos blended well together and managed to get many moves over with the crowd. It’s frustrating and mindblowing that CMLL hasn’t tried to create a feud involving Penta: his stuff is all over the place, one week he’s a rudo, the next one he’s the captain of a tecnico team and there’s never consistency with his opponents. ***

The Leyenda de Plata Tournament is one of CMLL’s most prestigious competitions and one that was created to honor El Santo’s legacy. Just in case you don’t know much about lucha, here’s a quick fact: El Santo is a cultural icon in Mexico that helped popularize lucha libre in the country. So, as you can imagine, winning this trophy is a big deal for luchadores.

These two had an outstanding match last june so the expectations were high for this rematch… and they delivered an absolute banger. Sometimes in lucha, the first two falls are meaningless but in this match, Bárbaro and Phoenix made sure to make every fall feel special. The first one had some high-speed athletic exchanges that ended with Phoenix blocking Barbaro’s splash and then unleashing a cutter, a kick to the face and a Fire Driver for the pinfall. In the second fall it was clear that these men were out there to destroy each other: they bumped like madmen and executed some incredible moves. The match reached a new level when Phoenix flew over the top rope with a tope con giro and found nothing but the hard, cold floor: Bárbaro had moved away and seconds after the crash, launched himself with an incredible splash that left Phoenix unable to answer the referee’s count.

.@ReyFenixMx goes for a tope con giro, but Cavernario isn't there any more #CMLL pic.twitter.com/iWFWPgSyFo

The third fall was mind-blowing. It was a blend of drama, good storytelling and crazy high-flying action, all accompanied by a red hot crowd. Apparently, a splash from the top rope to the floor wasn’t enough for Bárbaro as he repeated the maneuver, now from the top of the stage. We also got more cutters, tornillos, tope suicidas and finishers. The risks these guys took were tremendous. The match started to take its toll: Bárbaro and Phoenix had tried to kill each other numerous times throughout match and there wasn’t much left in the tank for the finishing stretch. After every move, they had to drag themselves to try and pin their opponent: there wasn’t room for error as every hold, strike or maneuver could be definitive. Cavernario kicked out of a Black Fire Driver and Phoenix had barely escaped La Cavernaria. The wild crowd wouldn’t stop screaming, they were being treated to pure lucha poetry. The exhausted Phoenix dropped his guard for mere seconds and Bárbaro immediately locked the Cavernaria for a second and last time. The referee almost screwed the ending: he broke up the hold before announcing the winner causing confusion in the crowd. Some awkward silence followed but it was soon turned into joy as it was clear Bárbaro had finally managed to get the win. Money rained upon the luchadores. I was far away and I couldn’t properly see but I hope there were some big bucks flooding the ring because Phoenix and Bárbaro had just performed in the highest of levels. This match managed to surpass their previous encounter: it was one of the best I’ve seen in Arena México and easily my CMLL Match of the Year.  ****½

Arena Mexico gave Phoenix a lukewarm reception but, as usual, he eventually won them over. This man never gives a bad performance and has constant 4*+ matches all over the indie scene and I think he deserves to be in the conversation for Most Outstanding Wrestler of the Year. Unfortunately, the dangerous moves these guys executed had a cost. Phoenix had to be stretchered out of the ring and he later revealed that he had suffered ‘a muscular strain in the groin’ that will keep him away from wrestling for the rest of 2018.

I screamed like a madman during the superb Phoenix-Cavernatio match so I was a bit tired for this main event, however, the awesome teamwork by the Dinamita Brothers lifted my spirits and I ended getting invested in the action. This was designed to celebrate Máscara Año 2000 and it achieved the objective: everyone worked hard and the structure of the match was perfect because it hid Máscara Año 2000’s weaknesses and allowed him to shine and even get the pinfall. The Dinamita Brothers were a joy to watch, I loved Último’s fire and the rest of the Laguneros team worked with grace and precision.

Templario is officially a Guerreros Laguneros member and that can only bring joy to our hearts. Templario is an incredible young talent, it looks like CMLL is behind him and I’m expecting him to have a killer showing at next year’s Fantasticamania tour in Japan. This night, he fit like a glove with his ‘Laguneros’ partners and showed great chemistry with Gran Guerrero.

The end was really cool. Último Guerrero tried to pin Máscara while holding the ropes but Tirantes noticed it and stopped the count. Guerrero started arguing with Tirantes but that old fox Máscara Año 2000 outsmarted him and rolled him up for the win. Máscara used the ropes as leverage too but he covered himself with masterful precision and Tirantes never noticed. After the victory, Máscara challenged Último to a hair vs. hair match that might lead to the actual Apuestas match happening in the future, but this is CMLL and you can never trust them with long-term storytelling. ***¾

40 Años de Dinamita was a fun show with a strong second half that included a spectacular must-see lucha masterpiece in which two guys wrestled at the peak of their abilities and maybe even shortened their career. I would also recommend watching the main event just to appreciate how cool the Nueva Generación Dinamita is.

It was cool to see Máscara Año 2000 get a proper celebration but I must say I’m not very excited about a Hair vs. Hair match with Último. I would rather see CMLL focus their attention on younger talent: create a feud for the Dinamitas, give Titán more time, try putting up a Templario/Gran Guerrero team and give Pentagón something meaningful to do. These are just wet dreams created by my innocent mind but CMLL has given some small (really small) signs of booking improvement and who knows? Maybe they’ll grant me one of those wishes. 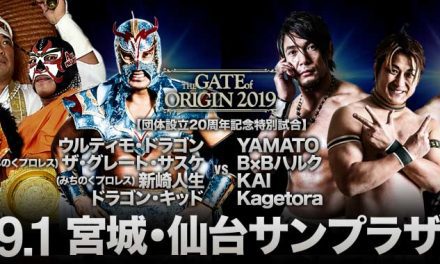 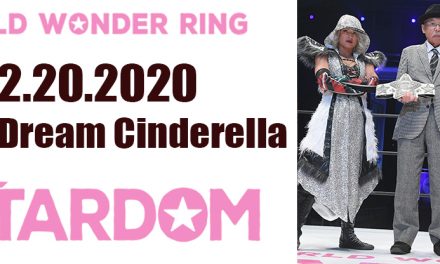 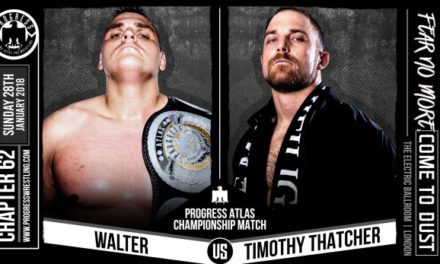