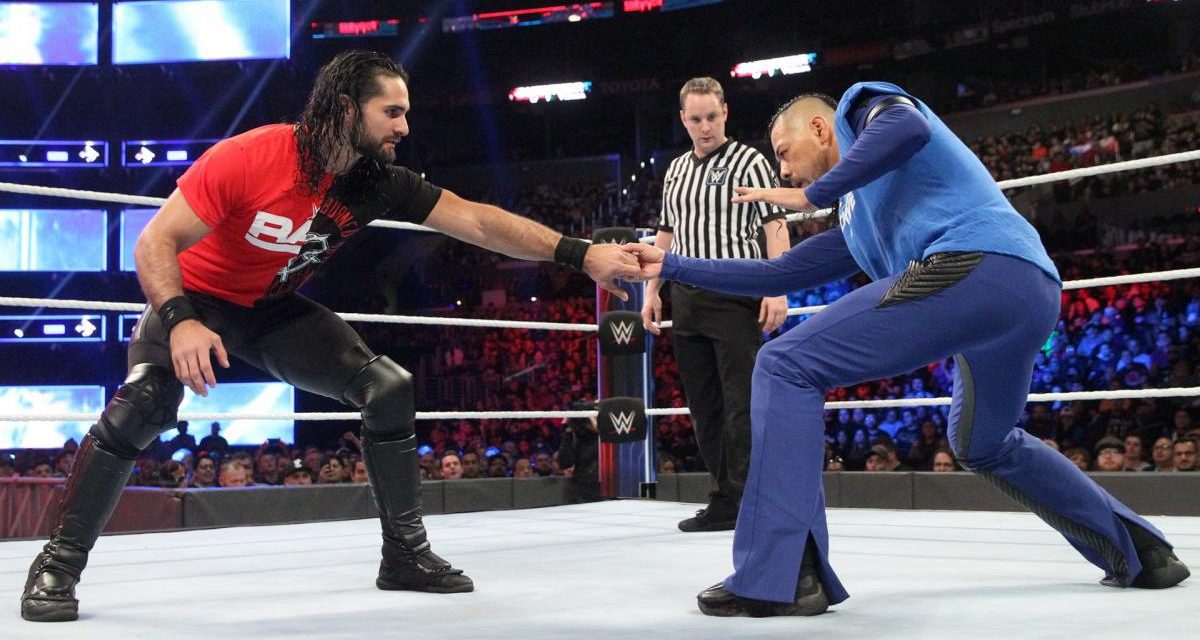 Kelly Harrass: Kelly thinks that he’s never been happier than when he watched the Detective Pikachu trailer. He wants to live in that world. On an unrelated note, the best match of the weekend will go down as Nick Gage vs. David Arquette. Follow Kelly on Twitter @comicgeekelly.

Lawson Leong: Lariat enthusiast and Match of the Month writer for this very site. Co-host of the Talking Smark and Talking Naruto podcasts. Lawson loves elimination matches but not as much as he loves Mustafa Ali.

Kelly: First off, why does team Raw suck so bad? What a garbage team. Secondly, Kalisto left the match early on after hurting his knee and Lince Dorado was roughly dropped on his head prior to his elimination. This truly is the safest company in the world. Thank you, Lord Titan. This match got better as it went on, but it started off pretty terrible. It was sloppy as best and boring at worst in the first half. Once things picked up, we got a few cool spots and just a well worked match in general. I’m not sure the second half of the match was good enough to warrant sitting through the first half though. **1/2

Lawson: Kelly’s right, Raw stinks. Hey, remember when Bobby Roode was main eventing this show and going back and forth with HHH? Me neither. At least the final four teams were the best ones. Gable’s avalanche German to the outside was very cool. Gable’s what I like to call, one of the good ones. The Shatter Machine to Woods was exquisitely timed. I got excited when it came down to the Usos and Revival.

My stream cut out for some of this so I may have missed some things, but I enjoyed the escalation of the match as it got down to the better teams. Before the final four, there’s not much to say about this. An uneven, competently booked match. ***1/4

Kelly: A majority of this match came very close to putting me to sleep. That’s not a good sign as we still have a little over three hours left to go. Everything outside of the one-on-one segment between Sasha and Asuka was completely lackluster. Those two put on a ***½ star match in the middle of a ** star special. As a reviewer, this is the worst kind of match you can get. You want matches that are good or bad. For the most part, this was neither, it was just boring. **¾

Lawson: Team RAW was slightly improved right before showtime. Every time I see Carmella I ponder the purpose of her recent title run. Learning that apparently Mickie James is the Randy Orton of women at Survivor Series was a fun fact. If you listen real close you could hear the sound of Asuka’s pop falling on deaf 70-year-old ears. The heat Nia got for doing anything made me laugh. It really shows you how much people like Becky.

This match could’ve been awful, luckily it was just mostly boring. Eliminating Naomi early was a bad move. The mini-match between Asuka and Sasha was by far the best part of this contest. That was great and worth watching. It highlights how wasted both women have been this year. **¾ (A whole ¾ for the Sasha/Asuka part)

Kelly: I’m really glad that all the wrestlers tonight are wearing the color of their brand so I know which brand they represent in this Battle for Brand Supremacy. I often forget things like that because I am very stupid. I and the rest of the WWE Universe thank you, Lord Titan, for being so considerate of our attention spans and intelligence levels. The downside of this consideration is that Nakamura had to wear this blue abomination.

Outfit complaints aside, I ended up really enjoying this match. Things started slow, but there was a good sense of escalation to this one. While the match never reached a blistering pace of a top level match from Nak, this was pretty good for 2018 Nakamura. We got a couple spots that fans had previously seen in Nak’s NJPW matches with Okada and Ibushi, but they came off as cover versions at best. Rollins put in a good performance that matches up with the rest of his 2018; really good, but a bit of a ways away from being truly memorable. I’ll give credit where it’s due though, the closing stretch was fantastic. ***½

Lawson: I quite liked Nakamura’s blue gear. But the Smackdown shirt made him look like a geek. Rollins worked hard but this lacked heat in the early going. They even did the famed “kill each other in the corner spot” of noted Ibushi and Zayn match fame, but it didn’t have near the same intensity as in those matches. Rollins’ superplex/falcon arrow combo always looks great and got the crowd up. This match picked up in the closing stretch and Rollins brought out a bit of the good Nakamura I remember. Dramatic nearfalls and well-timed reversals in the closing moments made this match less disappointing than most of Nakamura’s run has been. Good job, Seth. ***3/4

Lawson: Drake Maverick peeing himself led to the finish. Cesaro should’ve been world champ years ago. *

Kelly: This is the kind of match that makes me wonder why I don’t watch 205 Live every week. This was tremendous. Like, it might actually be my favorite WWE match of the year. Incredibly fun action throughout here with a bunch of crazy looking bumps. Ali is an awesome babyface and Murphy is perfect as the junior powerhouse. These two were put in a tough spot following the Enzo/piss match, but they managed to get the crowd into the show more than they have been all night up to this point. It’s honestly not as hard as this company seems to think that it is. All you have to do it put good action into a simple story and you’ve got a compelling wrestling product. Looks like I’ll have to add a show to my weekly viewing list. ****½

Lawson: Ali is a genius at going into his peril segments. For those familiar with their series of previous matches, these two played the hits for a bigger audience and it was great. Wish it would have gone longer, and wish Ali could win the big one. Despite that, these two showed why they’re the standard bearers for 205 Live, and that their work deserves a bigger and more hyped platform. Ali is the best male babyface in the company and Murphy is the closest North American wrestling has to Shingo. Fuck this company but God bless these two men. ****

Kelly: I guess I didn’t hate this. I will say that the worst thing about this match is that they covered up Finn Balor with a shirt. You gotta let that man’s tiddies and hog run free. Of course, the MVP of the match is the best wrestler in the world, Shane McMahon. His new “I’m half dead, please let me stop gimmick” is great and I hope he sticks with it. This whole match was that good dumb WWE. Very entertaining while being actively terrible. **¾

Lawson: Drew McIntyre is a stud. Renee Young saying, “Squad Up” made me start thinking about my favorite squad, The Strawhat Pirates. Neither of these teams can hold a candle to them.

I’m all for pushing Drew to the moon but Samoa Joe is the last person I would’ve given the early exit to. He was the only member of Team Smackdown I had any investment in. This ongoing thing of Shane being the last member of his team needs to stop. It’s nonsense. I like Shane when he jumps off stuff but stop with pushing him already. Gentleman’s ***

Kelly: This ruled, DQ finish and all. Charlotte and Ronda have awesome chemistry. This felt like the Charlotte/Banks matches, but better. There was a sense of danger to the match, but it didn’t feel like anyone was going to accidentally snap their neck. To borrow a term from JR, this was a slobberknocker. I was worried that this match was going to be Charlotte getting fed to Ronda, but she held her own in a legitimate looking way. Ronda is so much better in the ring than she should be at this stage in her career. I love the way that she’s able to snap on submissions in such weird ways that totally works. And this was the perfect way to end this match. Now the rematch can have an actual build and we got to see Ronda take a definitive beating without taking an actual loss. The final shot of her leaving the arena was tremendous. This was the first time she really had to face a WWE crowd that didn’t like her and that may have defeated her more than any of the assault from Charlotte. I’m very interested to see what comes next in this story. ****½

Lawson: Early on this had such a different feel and intensity from everything else on the show. I was loving it and then the sloppiness factor kicked in. An errant elbow from Charlotte bloodied Rousey’s mouth. Some strikes didn’t connect or look quite right. This wasn’t a technical masterpiece. But it truly conveyed a sense of struggle. This felt like a fight. This wasn’t a cooperative dance. I really loved it. All the grappling and groundwork felt truly novel. Rousey and Charlotte both felt challenged in different ways. The crowd was getting behind Charlotte at the end. Even Cole dropped “5 stars” on this match before the DQ finish.

As for the angle… I fucking loved that too! This is what I’ve wanted. Charlotte’s a badass just like Becky now. Will this feud continue? Are Becky and Charlotte going to team up and be badasses together? Are they going to lead Sasha and Bayley to kill the MMA horsewomen? Give me all of it, inject all of this into my veins. ****½ for the match. ***** for the angle.

Kelly: I don’t understand this match at all. Brock Lesnar tossed Daniel Bryan all over the ring, not only until Bryan was dead, but until the crowd was dead. I seriously hope that everyone that wanted Bryan to stay in WWE because it was safer buries the hell out of this match. What came after that was actually pretty great. If we had gotten a more even match, I think I would have enjoyed this a lot more than I did. For a few minutes we got to see the Daniel Bryan of old and that was such a welcome return. My hope in the match returned, but it was soon crushed by an F5 out of nowhere. It started and ended like every other boring ass Brock Lesnar match, but that middle bit was wonderful. Ultimately, it was a disappointment, but not one that completely sunk the match. ***¾

Lawson: I got what they were going for, but this was too similar in structure to the Styles match for my liking. Had Bryan won, I’d feel differently, but since the status quo was in force here, I’m a bit let down by what we got.

I say a bit. Because despite the similarities to last year’s encounter, I still got swept up in a lot of the drama. I think the initial heat segment went too long because once the match evened out I was really into it. And I always love the Danielson stomps. This was a worthy main event, if not quite the match of the year contender many of us were hoping for. **** 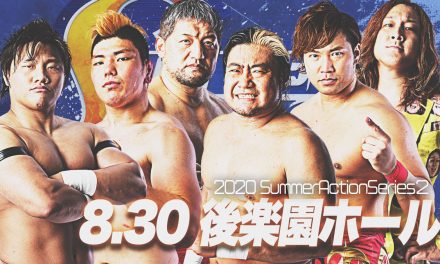