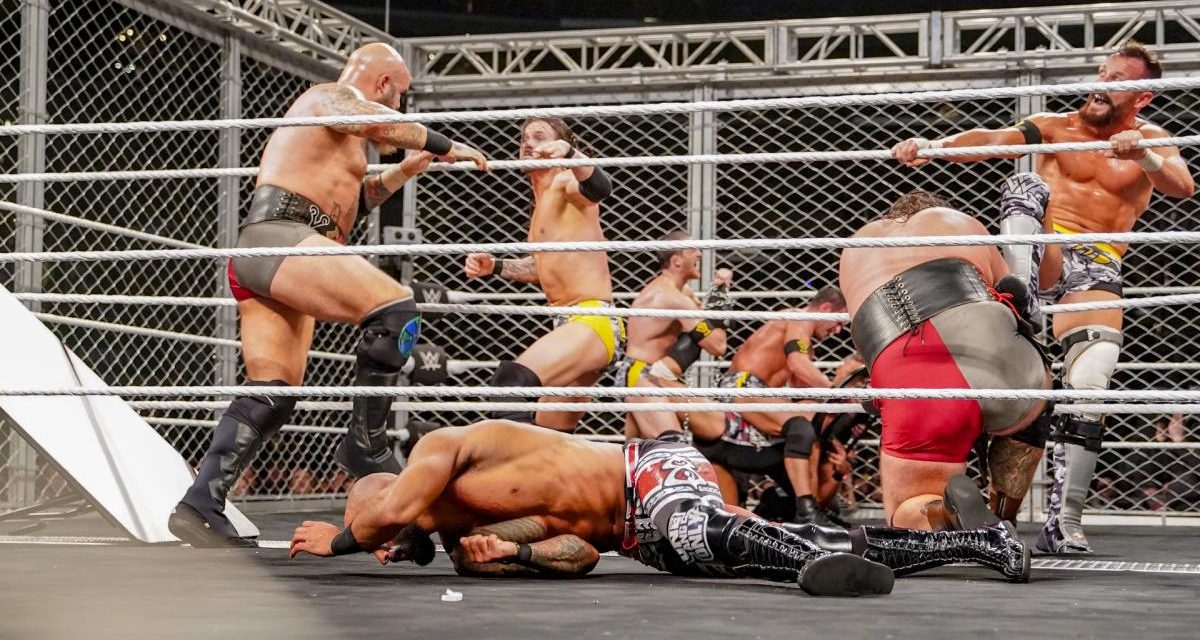 Steve Case: Reviewing this bad boy with Officer Bob, a man who enjoys Pokémon Go and fighting crime, who is watching his first live wrestling show with myself, Cheesecaster Daine, the Saucy Minx, and smelly dog farts Washer. A true cornucopia of wrestling fandom.

Steve: Well hello Mr. Riddle! It was cool to see the big pop for Riddle’s TakeOver de-butt. He definitely needs some help with the promos, but this guy is a STAR and should be main eventing Mania within two years. These two will have their banger on TV I’m sure. Somewhere Trent Seven is smiling. Bro

Officer Bob’s Thoughts: “I’m not sure if the men are supposed to be better than the women, but that was every bit as good any man’s match we’ve seen tonight.” FYI, we watched some BOLA matches from this year before the show started.

Steve: I was afraid the stip would hurt this match, but they ended up doing a great job with the pacing and layout. This match was pedal to the metal the entire time. Loved the fire Kairi showed out of the gate. Shayna was merciless and Kairi showed great fire while selling the beating. The interference didn’t bother me at all, as it was expected and made sense to the story they are telling. Dakota Kai felt a little out of place as the first to help, but I suppose her beef with Shayna from a few months ago makes it work. The finish was great with the misdirection of Kairi’s friends evening the odds, only for Shayna to catch the elbow into the flash pin. These two are absolute money together and I’m very intrigued how the added parts add to it. ****

Officer Bob’s Thoughts: “Gargano was the exact kind of guy I wanted to see Black tear apart with his killer strikes.”

Steve: Someone check to make sure Black didn’t skin Drago for his entrance gear. The thing I love so much about Black is that the psychology in his matches is always top notch. And when he’s in there with a guy like Gargano, magic. Gargano was amazing here working as the deranged heel, as his work was vicious, sneaky, and had more than a hint of desperation. This was the best Black has looked in NXT in my opinion. He’s a bonafide STAR and I really hope he is treated well once he makes the jump to the main roster. And what more can be said about Gargano? He’s one of the 5 best in ring performers in the world and I don’t think there’s an argument. These two went out and tore the house down. This was a sprint from start to finish with some amazing, hard-hitting exchanges with some great moments of storytelling sprinkled in. Black begging for the knee in his seated stance and Johnny begging to be put out of his misery, only to try and sneak in a cheap win was excellent. The finish was a wonderful exclamation point to this feud, but I suspect Johnny’s dark journey is just beginning. ****3/4

Officer Bob’s Thoughts: “Athletically, it was much slower than all the other matches, but I was still on the edge on my seat the whole time. I had no clue who was going to win. Wasn’t as good as the Black match, but still really good.”

Steve: Dream doing the Hollywood Hogan entrance completes me. That was incredible. This was an excellent showing for the Dream. You have to remind yourself he is only in his early 20s. He does so many little things well. He carried the majority of this match. His character work with the Hogan cosplay mixed in with his normal top-notch flamboyance was incredible. He also looked incredibly smooth in his exchanges and focused in his attack of Ciampa’s knee. The ring post figure four and multiple figure four attempts were great. Ciampa was great selling the knee and the two of them created some incredible near falls that had me completely fooled. I was thinking we might see Johnny get involved somehow, but they must be saving that for down the road. Ciampa is a great heel champion so the finish wasn’t surprising. This match was the Dream show though. The crowd is completely behind everything he does. When he gets his moment, whether it’s in NXT or on the main roster, it will be huge. ****1/4

Officer Bob’s Thoughts: “That was everything you wanted in all the previous matches put into one. What time is Survivor Series tomorrow?” I think we may have made a new fan tonight….

Steve: Small details like everyone coming in with the face paint are things I appreciate and why I love NXT so much. This match was incredible. This had all the nostalgia of the classic War Games matches with today’s new age style mixed in. The alternating entrant portion was incredibly entertaining as everyone got a chance to run wild and shine. Roddy especially shined with multiple back breakers on everything that moved. I loved the teases of dissension as the Raiders kept beating Dunne out of the cage, but it turning out that they just wanted a piece of the UE that bad. There were lots of tremendous double and triple teams with different combinations of guys, but the UE’s cohesion really got them through this portion of the match. The stuff with Dunne in the cage was a little hokey, but it didn’t last long enough to take away anything for me. Once The Match Beyond started, this got BONKERS. The War Raiders really shined with their double teams and power, but Hanson was amazing here with his athleticism. Dune and Fish also were terrific powering through their knee issues. The big spots that people will talk about are the big tower of doom off the cage, followed by Ricochet’s double moonsault/reverse 720 whatever you want to call that insanity. But the standoff with both teams on separate sides of the double cage, then the walk to the middle, gave me chills. The finish was also and wonderful feud ender, with both Ricochet and Dunne hitting their finishes and pinning the smarmy Cole in the middle for the ultimate comeuppance. If this company at any level can pull off a better version of this match, I’ll be surprised and anxious to see it. This might be my WWE/NXT MOTY. *****

The One! The Only! HIS NAME IS @KingRicochet! 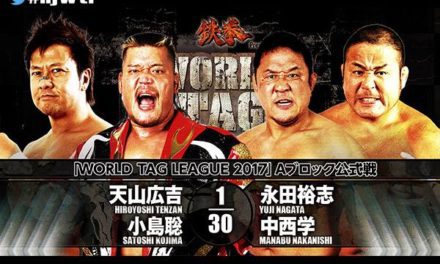