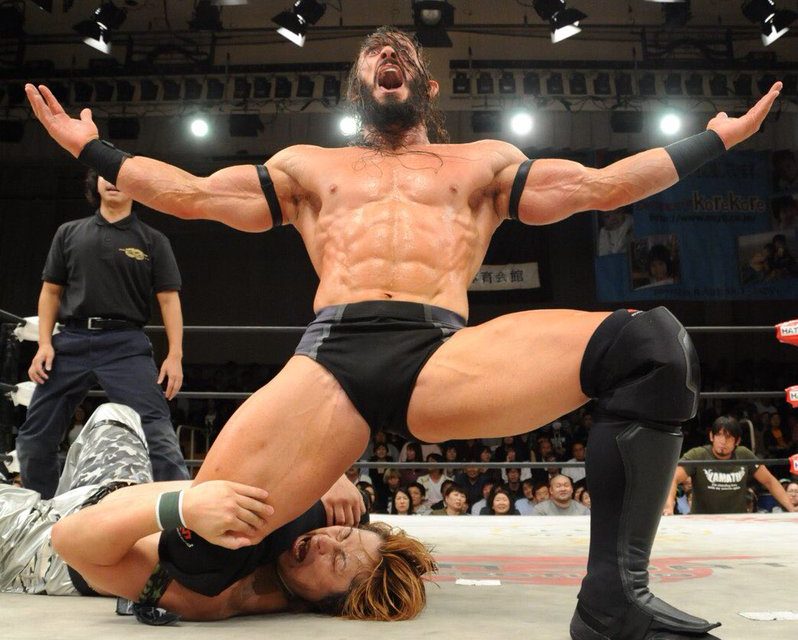 A shockingly fun six-man all things considered. Stalker’s comedy was simple but effective, Kaito Ishida continued his wave of momentum from Gate of Destiny, and K-Ness is back, and that is always good. He pinned the unimpressive Bitman. Fun opener. ***

God this ruled so much. Mochizuki beat up the piss out of Minoura and two and a half minutes in, kicked his head off for the victory. Minoura can use this as a stepping stone as he continues to ascend up the card. I can’t rate this because it was so short, but go watch it please. NR

Mochizuki offered a handshake to Minoura before their match, which was met with a hard slap to the face. After quickly dispatching of him, he asked why. Rookies usually try to get the jump on veterans before their matches but going right for the face like that made is feel personal. Minoura politely asked if he could enroll in Dojo Mochizuki. Mochizuki pressed for an answer to his question. Why did he slap him in the face? Minoura was super fired up about facing Mochizuki and potentially being allowed into the dojo. He knew that the kind hearted Mochizuki would be able to take pretty much anything he threw at him, so he hit him as hard as he could. Mochizuki said that he is not so kind hearted in those situations but he can see where Kota was coming from. As was stated when the dojo was established, anyone can come and go as they please. He could have joined without the slap. Minoura just then remembered those were in fact the rules. Mochizuki passed him one of the heavily praise, high selling Dojo Mochizuki shirts and told him to wear it while he was in their corner in the next match. IHeartDG.com

Now this is what I like to see. These Dojo Mochizuki kids showed some fire and passion in this match. U-T came into this match with a chip on his shoulder. He’s been hot lately and he finally feels like he’s at a point in his career where he’s above the lowest rung of the roster.

Yoshioka, Skywalker, and Watanabe stepped up to the plate and rose to U-T’s level. This was a much-needed performance for all three of these youngsters. Watanabe and Yoshioka got more from this loss than anything they’ve done since they were mutilated by the veterans two years ago in Korakuen Hall.

The Dojo Mochizuki kids have finally picked a fight with someone other than Mochizuki and I hope this feud helps with the youngsters and the Tribe Vanguard trio rise up the card. I really liked this match. U-T tapping out Yoshioka with the Beinllave was the cherry on top. Very good stuff. ***1/2

U-T boasted over getting another win over Dojo Mochizuki. Shun thought U-T would be coming for him today. He beat Hyo last month, now Yoshioka. He’s aiming low on the pecking order. If Shun wanted U-T to come for him, all he had to do was ask. IHeartDG.com

Dragon Dia is the latest project pumped out of the Dragon Gate training school and the protege of current Open the Brave Gate Champion Dragon Kid. His debut was announced last month and since then speculation about his debut and who/what he’ll be has been a constant talk in the Dragon System community.

After match one, I have no feel of what they’re going to do with Dia, but I’m excited to find out. He looked extremely confident in the ring, like he’s done this before. He battled with Eita and Kanda and never looked out of place in the process. He got in plenty of offense, and his loss was due to a R.E.D. box attack that helped Kanda set up Ryu’s for the win. I really liked this match. Dragon Dia excites me and if he continues to wrestle like this, I’m sure he’ll fit in nicely with the rest of the roster. ***1/2

DK revealed that Dia used to be an apprentice to Eita. He congratulated him on his debut. He lost today, but that is just today. He hopes the fans will be kind but critical with him as he progresses. IHeartDG.com

Yes, the unstoppable trio of Bandido, Hiroshi Yamato, and KAI picked up the win here. What would you expect from such a well-oiled machine?

I still can’t wrap my head around the names in this match. Who would’ve thought that a year ago, Dragon Gate would be without CIMA, T-Hawk, or El Lindaman, but they would add Hiroshi Yamato, KAI, and Kazma Sakamoto. I was slow to come around on KAI and Yamato, but I must admit that they are starting to find their feet in this company. They held their own in this match.

The real star was Bandido. It is clear that Dragon Gate is ready to get behind him as a gaijin threat in the midcard. He spent most of this match flipping around with Daga, who looked impressive, just not as much as Bandido did. His German Suplex finisher rocks and I really hope it catches on with the Dragon Gate crowd. This match wasn’t anything great, but it served a purpose and that’s good enough for me. ***1/4

Two days since shitting the bed in Osaka, PAC returned with a vengeance and put on a display that immediately put him back in the “best in the world” conversation.

The most interesting note about PAC in his first month back to his former home promotion has been seeing his character work fall into place in the modern Dragon Gate landscape. When he left in 2012, he was still as pure a babyface as there was. Whether it was with Typhoon, Junction 3, or World-1 International, PAC remained a lawful good in whatever unit he was in.

The world chewed up and spit PAC out, however, and when he returned a month ago to Dragon Gate, he was a new man. A year away from the ring (and seemingly humanity) did not stop PAC from retaining the King of the Cruisers moniker. He proved he can keep up with a new generation of flyers like Jason Lee and Flamita who weren’t a part of Dragon Gate when PAC left. In this match, he was a step ahead of YAMATO, Kzy, and Dream Gate champion Yoshino, who have all dominated the top of the card this year.

Flamita also bounced back from a rough showing by pinning Genki Horiguchi, YAMATO and Hulk struggled to battle the dynamic Big Ben duo, and Kzy made his presence known once more by challenging anyone who wanted a piece of him. In every possible way, this was a successful match.

No other company in the world can do what Dragon Gate does in these 12-man bouts. This is a perfect screenshot of Dragon Gate’s 2018 as they head into what should be a very interesting 2019. PAC is a force to be reckon with, and it is up to everyone else on the roster to catch up with the game that he’s playing.

PAC had something to say. R・E・D controls Dragon Gate and now he has a surprise for….Masato Yoshino. The next Dream Gate challenger will be none other than PAC.
Did PAC think Yoshino would refuse? Bring it. He polled the fans as to where the match should take place. The Tokyo faithful were in agreement. December 4th, in Korakuen Hall. PAC congratulated Yoshino on sealing his own fate. It was the beginning of the end for him. IHeartDG.com

This is what a Dragon Gate Korakuen Hall show should be. A fun opener, some interesting angles in the midcard, and a main event that makes you stop what you’re doing and pay attention to every single thing done in the ring. These are the shows that I miss reviewing. Even if I can only call one match “great”, this show as a whole ruled.

I’ve been saying it since July, but the time has finally come to proclaim that Dragon Gate is on an upward slope and now is the time to hop back on the train. PAC is back and he’s red hot. YAMAHulk, Dragon Kid, and the Natural Vibes trio are doing a great job as champions, and the young guys are finally starting to find their footing. It took them a few months post-CIMA exodus, but Dragon Gate feels like it has direction again. The stories are slowly starting to become what they once were. I’m really in on Dragon Gate right now, because I get the feeling that barring any catastrophic injuries or shocking exoduses, Dragon Gate could have a killer 2019.