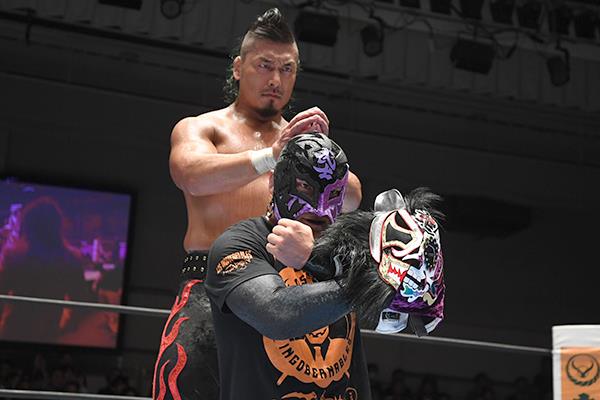 I think this is the first wrestling writing I’ve done since the G1. With only two league matches on this card, this should be a good show to ease back into the written wrassle-word.

Speaking of writing (and also drawing, which we weren’t talking about, but are now), my new book is available on Kickstarter RIGHT NOW. It’s called Hockeypocalypse: Cult of Hockey, and it’s about mutants who use hockey games as ritual warfare to battle for resources in post-apocalypse Canada, and is the best sports graphic novel on the North American market. The new book is only $20 Canadian, go get a copy – it’ll be out by Christmas!

You can tell that the Super Junior Tag League is vitally important to New Japan because it takes place entirely on Road To shows. This show, in particular, is in the shindie-est looking building I think I’ve ever seen NJPW run in – it looks like they emptied out a warehouse and then filled it with chairs. If it weren’t for the polished look of the New Japan wrestlers, one might think this was the best-attended Secret Base show of all time.

Shingo’s entrance gear rules. I’m all for ridiculous themed costumes like his dragon mask and coat. Shingo is one of my favourites, and I love watching luchadors in Japan, so this match is what made me want to review this show. BUSHI is also here.

The pacing in this match is indecisive. There are the furious bursts of offence that you would expect from luchador team and a Dragon System wrestler, but these aren’t able to build any sustained excitement because of the long periods where nothing happened.

The countout tease where Volador stood next to the apron for like four counts might be one of the worst I’ve ever seen. SUCH DRAMA as Volador casually rolls into the ring after taking several seconds to think about it.

The pace sped up after the countout tease, with Shingo and Soberano Jr providing the most exciting moments of the match. Soberano’s sunset flip counter to Shingo’s Gory Bomb was an incredibly convincing near-fall, as was the Pumping Bomber that followed shortly thereafter. Shingo picked up the win for LIJ when he splattered Soberano all over the mat with the Last Falconry.

This was… fine. Soberano looked good, but Volador seemed a step off for all of their double team attacks, and generally didn’t seem particularly interested in being there. The names involved, and Volador’s performances in Best of the Super Juniors over the past few years, gave me high expectations for this one, and they didn’t come close to being met. **1/2

As far as I’m concerned, Jushin Thunder Liger IS Japanese wrestling. From his high-energy, high-impact offence to being a literal anime character, he’s a perfect exemplar of puro.

Team Anime survives an initial assault from RPG3K to take control, with Liger applying a sick looking dragon sleeper out of his trademark surfboard position, and Tiger Mask IV being Tiger the Grumpy. The veterans target YOH’s back, which I’m choosing to believe is a call-back to the Young Bucks’ successful strategy against 3K all the way back at Wrestle Kingdom. Tiger Mask’s offence focuses entirely on kicks (several of which are, inadvertent though they may be, to YOH’s ass instead of his back). This proves a subtle bit of storytelling, as YOH’s chance to tag out comes when he finally times Tiger’s attacks and counters a kick into a dragon screw.

After some fiery tandem offence, Tiger Mask survives and gets the first real nearfall off a Tiger Driver. Not to be outdone, Liger gets another close nearfall with the Liger Bomb. All these bombs from Team Anime are for naught, however – YOH slips out of a Brainbuster attempt and traps Liger in a rolling prawn hold for the flash pin.

This was a necessary improvement on the previous match – it was wrestled with far greater energy and purpose. Tiger Mask IV, of all people, really stood out to me in this match. He was in full-on Tiger the Grumpy mode, and got big reactions with a top-rope butterfly suplex and the Tiger Driver. He’s typically not one of my favourites, but he really held this match together and provided the narrative glue that was wholly missing from the previous bout. ***1/2

There’s really no reason to watch this show. The LIJ/luchadors match is disappointing but not bad, per se. Team Anime vs. RPG3K is entertaining, and a fun watch, but it’s one of the hundreds of good, entertaining New Japan tags that will disappear into the aether, overwhelmed by better, more important matches. 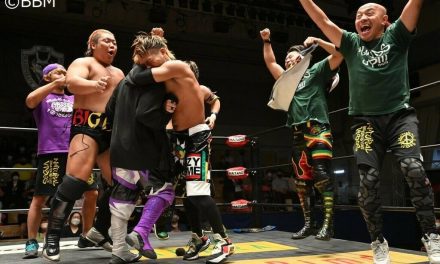