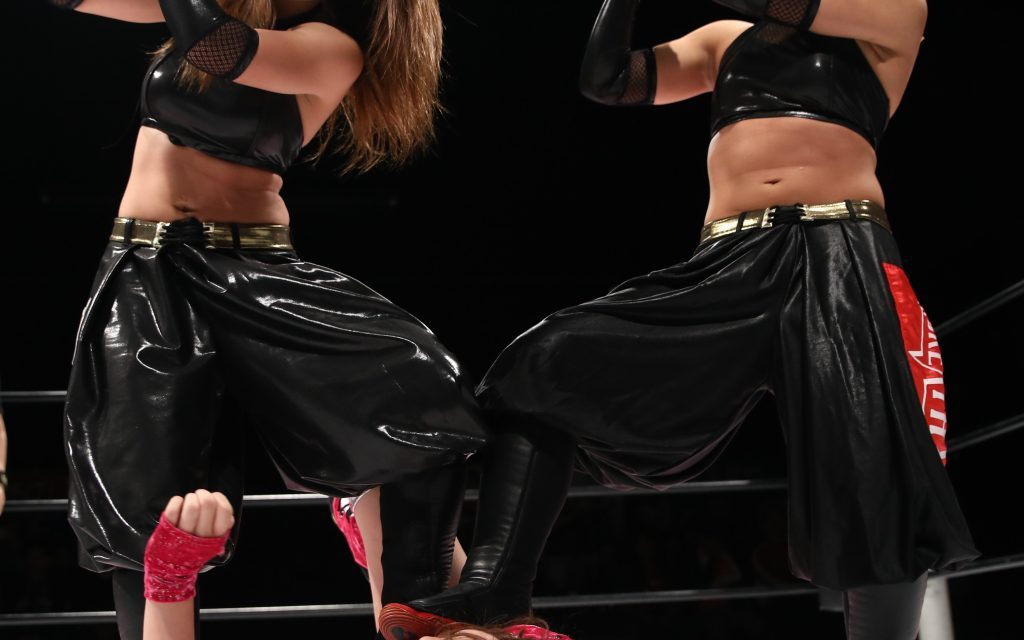 Night one of Stardom’s Goddess of Stardom Tag League kicks off with a rookie opener, the new main heel taking on the Future of Stardom champion and then we kick off into block action.

The debut of Hanan’s sisters as they faced off in the opener. I loved the subtle gear choice. Hina was all blue with a pink shoulder and Rina was all pink with a blue shoulder. This was the kind of match you would expect from the rookies but neither looked at all bad. No bad blood means they’re still on good terms so maybe some outings as a team in future for the sisters? **

Hana never even got out of 1st gear. She was out there to let Kid know she wasn’t in her league. Kimura was quite cold and arrogant in this one. She continues to play up this side as she is building to her big match with Kagetsu. **

For this being Hanan and Leo’s first time as a team they worked well together. In a subtle way of letting a newer fan know the standings of the two teams Hanan and Leo were desperately trying to throw everything at Mayu while keeping Saki out but once Mayu and Saki got rolling they scored the easy win. An expected win from the ace and her stablemate over 2 rookies. As the former Goddesses champions, Iwatani and Kashima go in as one of the potential winners. **1/2

Is it weird that I came away most impressed by Ruaka? She did a lot of the work and looked good while doing it. I definitely can’t wait to see how she develops later into her career. Overall this wasn’t as one-sided as the last match but still let people know Momo and Utami were the team to beat. ***

For those unaware I am Irish. So is Martina. Therefore I want Martina to Roman Reigns her way through Stardom and win all the belts. I really enjoyed this match, seeing Sumire so happy to have her drinking buddy and partner in crime back is heartwarming stuff. If you don’t like comedy then you won’t like a lot of this but down the stretch, there’s some good wrestling packed in too. Suprised to see the Oedo Tai duo pick up the win but happy nonetheless ***

This was one of those Oedo Tai matches where the whip is used, interference aplenty but good action. Both Tam and Shiki made mention of previous matches with Kagetsu in the pre-match interview so I was a little disappointed we didn’t see that played up more. ***

Post Match: Hana Kimura comes out to call Kagetsu a dog. She questions if Kagetsu was happy with the match, due to the Oedo Tai craziness, and says the fans are laughing at Kagetsu. She says she doesn’t want a draw in their title match, referencing the Momo draw, and Kagetsu attacks as the two brawl. Once Oedo Tai has pulled Kagetsu away Kimura says she wants no toys, no draw, no count-outs and Kagetsu promises the most violent match in Stardom history! The build for this is PERFECT I cannot wait to see these two tear each other apart.

Two of the current Artist of Stardom champions face off against two gaijin from an opposing stable who are always in contention for the trios titles is enough to give this a big match feel. These two were so evenly matched. Queens Quest just couldn’t put JAN away and JAN were able to prove why they’re the champions with a great display. This was a fight for pride and points as nobody wants to join the Hanan’s and Ruaka’s of the world on 0 points.