This week on Wrestling Omakase John is joined by returning guest Kevin Brown (@darukinoi) to give a full review of New Japan’s latest Ryogoku show, King of Pro Wrestling.

Hear their thoughts on this very up and down but newsworthy show match-by-match, including why some stuff may just not be for them right now in New Japan. There’s a lot of macro thoughts about NJPW’s place in the wrestling world and what both want to see out of it vs. what they’re actually getting at the moment. Other big topics include Shingo Takagi’s debut as the newest member of LIJ, Taichi-Ospreay being set up as the next NEVER title feud, the state of the junior division without Hiromu, White-Tanahashi and the major post-match angle involving the BC OGs, and finally the three way main event, which was…….interesting. Plus, some bonus topics include: other Japanese wrestling promotions you might want to check out if you’re not into NJPW right now (and what their current states are), John goes to the worst anime con of all time, thoughts on Attack on Titan Season 3 so far and a few other interesting shows in the fall season, and more. And that’s not even touching on an interesting mailbag featuring a lot of weird questions. It’s NJPW and more, this week! 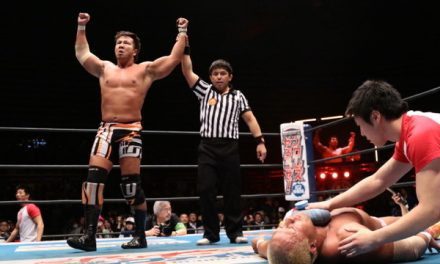