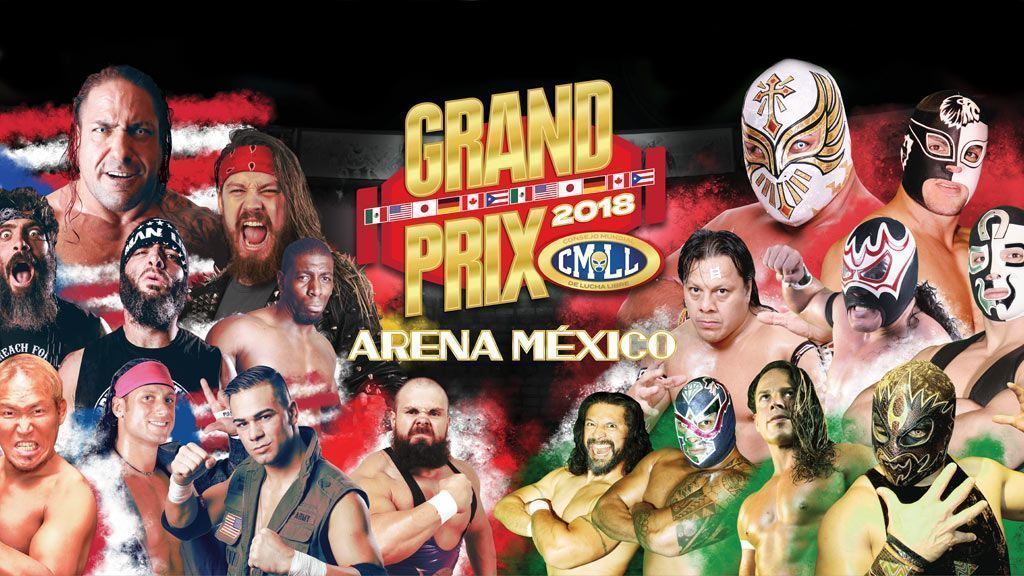 Every year CMLL pits a Mexican team of luchadores against a troupe of evil foreigners in a match called Grand Prix that is contested under Cibernetico rules. Don’t get confused by the ‘Cibernetico’ bit: this doesn’t involve the awful wrestler that goes by that name, it’s just a term used for an elimination multi-man battle (in this case 9 vs.9) where there must always be a single winner.

This year’s ‘Rest of the World’ team was made up of not-so-hot wrestlers from NJPW, ROH, CMLL and the indie scene with The Briscoes, Elgin and Flip Gordon being the standout names. The Mexican team was composed by your regular mix of veterans, younglings, and stars, with Hechicero being the standout name for lucha fans. The undercard of the show didn’t look good at all: yes, you had LA Park and Bárbaro, but there’s also Cibernético, Zorro, Hijo del Signo and Camorra.

The attendance for the show was not great: there were many visible empty spots on the floor seats and huge chunks of the grandstands were completely empty. As a result, the crowd was not as hot as one would expect when the pride of your country is at stake.

This was a slow opener with awful wrestling and terrible timing. Some guys worked hard and tried creative spots, which led to the crowd getting excited during the third fall. Unfortunately, the finishing stretch fell apart thanks to the slowest pinning combinations you can imagine courtesy of Hijo del Signo and Camorra. I honestly couldn’t tell you what happened at the end. Robin was clearly the standout performer, doing some spectacular moves and always trying to get the crowd invested in the match. **¼

This was Avispa Dorada’s debut match in CMLL and the first time I’ve ever heard of her. Avispa was easily the most fun performer in this match: she worked hard, had a cool ring gear and did a cool tope con giro that set-up her team’s victory. It was fun to watch Dalys throw women around and I expected a little bit more from Reyna Isis, who’s been quite good lately. Overall, a solid match that highlighted Avispa Dorada’s talent. Hopefully, we’ll get a proper women’s rivalry soon (who am I kidding?). Also, Metalica should really come out to the ring with a Metallica theme song. **½

This was a lightning match, which meant there’s a 10-minute time limit. I hate Tirantes with a burning passion, but I gotta say that screaming at him and hearing all sorts of insult thrown at him is always fun and in this case, it made this match a little bit more entertaining. Valiente and Guerrero had a solid outing that included a beautiful Valiente Special and a tremendous Avalanche Samoan Driver that gave Guerrero the win and Valiente’s first defeat in a lightning match in 2018. This was okay, but I will have more memories of the crowd insulting the crap out of Tirantes than anything in the match itself. **¾

Ciber the Main Man (aka Cibernético) and The Chris (aka El Zorro) are terrible names and these gentlemen should be ashamed of picking them. What in the blue hell were they thinking? Maybe they tried to pick something as dreadful as their in-ring work. But no. There’s no name that could describe Ciber and Chris’s wrestling. These guys are some of the worst wrestlers I’ve ever seen live, they’re slow, boring and are incapable of doing the most basic moves. From a clothesline to tripping someone’s feet from outside the ring, they failed miserably at everything they tried in this match. Poor Bárbaro, he went from being the standout performer of Aniversario to babysitting these long-haired doofuses, but not even him could carry them in this match, the weight was too much. Enter LA Park, a wise man that doesn’t have time for any of Cibernetico’s bullshit so of course he pinned him after a weak clothesline, looked at the camera and motioned something that I would interpret as ‘this guy FUCKING SUCKS’. Then, he quickly left the ring without looking back.

The highlights were Hijo de LA Park and Místico diving off the stage and LA Park’s use of a strap as a tool of justice. Also, it’s worth noting that LA Park got a very small pop during his entrance; it’s crazy that I got to hear these titanic pops when he returned CMLL just a couple of months ago, but after the disappointment of not having the Apuestas match with Rush and maybe even some overexposure, his popularity has cooled off considerably. I think he should take a break from CMLL, focus for a while on MLW and some other Mexican indies and then return to get those golden curls from Rush’s head. **¼

CMLL has an easy, unimaginative but successful recipe to manipulate Arena Mexico: you just throw a little nationalism, make every foreigner in sight heel and voilá, you’ve got yourself a hot, rowdy and invested crowd. In this case, there was a cool ceremony with the Mexican national anthem before the match that helped the crowd get pumped for the action, unfortunately, that would be the peak of emotion for the night.

This year’s Grand Prix was made out of little two minute matches, many brawls and a disappointing lack of fluency. There were many interesting face-offs, but only a couple of them produced anything of interest, by example, Terrible and Gilbert had some cool striking exchanges that made the crowd go wild, but just when things got interesting, they would exit the ring and allow two other guys to continue the match. This kept on going for a long time. Too long if you ask me. The crowd eventually got bored and the heels didn’t get enough heat in order to make the match interesting.

Volador and Taven feuded throughout the match, with the latter avoiding the former for nearly 30 minutes. When they finally met, the crowd loved it: they brawled, had some cool sequences, Volador managed to kick out of Taven’s Frog Splash and then used a Canadian Destroyer to eliminate him from the match.

After being defeated by Diamante Azul at the end of last year’s Grand Prix, Michael Elgin was always the favourite to win this one but we had to sit through a weird finish to get to that: Último Guerrero and Euforia teamed up against Elgin, who was the only remaining member of Rest of the World team. The Mexican crowd didn’t know who to cheer for: Elgin was supposed to be the foreign heel but he was valiantly fighting against Último and Euforia, and was impressive doing it. So, at the beginning of the match, CMLL told everyone: ‘hey, you should boo these foreigners’ but at the end of it, they were trying to put one of the foreigners over by pitting him against two Mexicans, resulting in utter confusion from a tired crowd.

Eventually, Elgin eliminated Euforia, had some nice exchanges with Último and got the victory after an Elgin Bomb. As he always does, the Canadian managed to get the respect of Arena Mexico with a great performance. Michael Elgin was far and away the MVP on the match: he eliminated three men, threw many people around and even attempted some lucha moves.

Overall, the action of the Grand Prix was slow and honestly, there wasn’t much to talk about which is bad considering that this lasted nearly an hour. Flip Gordon was definitely a highlight: the crowd wanted to boo him, but he was so spectacular and fluid that they couldn’t help but to clap his every move. However, he only had a couple of minutes to showcase his talent as he wasn’t featured nearly as much as he should’ve been. Hechicero lasted longer than anyone expected, Gilbert el Boricua was solid and managed to get some noise from the crowd thanks to his exchanges with Terrible and Hechicero. Dark Magic, an unknown man to pretty much everyone, was enjoyable and smart enough to get a decent amount of heat. Finlay did absolutely nothing I can remember of, The Briscoes and Nueva Generación Dinamita (Sanson and Cuatrero) had nice but disappointing interactions and the Taven/Volador was fun enough for the crowd to get invested. ***

And just in case you want to know the order of the elimination, here it is:

After the match, Último showed his respects to Elgin and challenged him to a match next week. Elgin cut a promo on how he loves Mexico, lucha libre and accepted Último’s challenge. Unfortunately, there was no translator available, Rayo Jalisco Jr. refused to shake Elgin’s hand and everything came out awkward as hell.

CMLL Grand Prix 2018 was a mediocre show, with some bright spots such as Avispa Dorada’s debut, LA Park getting annoyed at Ciber and Michael Elgin’s performance. The Grand Prix match itself was fun to watch live, but it felt too long to sit through. I wouldn’t recommend spending those $10 to catch a replay, but if you’re a die-hard CMLL fan, it might be a good idea to put this show on the background while you work on some other stuff.