X Fills the Spot: Who Will Be the New LIJ Member? 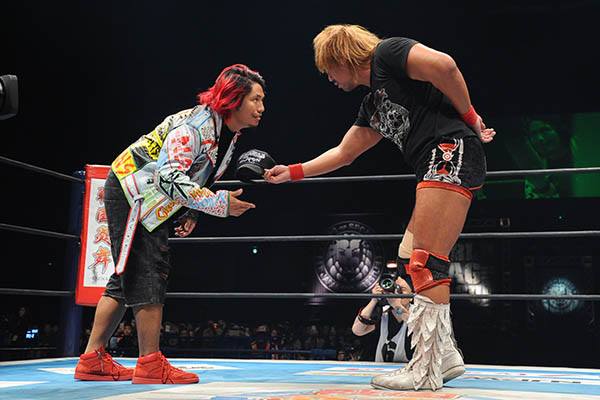 The new ‘pareja’, labeled as “X” for now, will team with Tetsuya Naito, BUSHI and SANADA to take on the CHAOS team of SHO, YOH, Toru Yano and Kazuchika Okada.

It seems that the new member will be a permanent fixture within L.I.J. based on Naito’s comments that “five, not four, will wait for Hiromu’s return”. To be a real fit with the faction, some history is required, as all other members have had some connection to Naito prior to their induction to the group.

The smart money is on “X” being a junior heavyweight who can team up with BUSHI for the upcoming Junior Tag League. On Monday, expect “X” or BUSHI to get a pin over either SHO or YOH to hint towards the final of the tag league. Here are the top four suspects:

Shingo’s last match with Dragon Gate is tomorrow, and he appears to be most people’s favourite pick to be “X”. Despite claiming he wishes to become an independent wrestler and travel the world, Taiji Ishimori pulling a similar stunt earlier in the year only to join NJPW sets the precedent for Japanese wrestlers affiliated with other promotions who wish to join their ranks.

Shingo trained at Animal Hamaguchi’s dojo, as did Naito, EVIL, and BUSHI. Despite Shingo not necessarily fitting in the L.I.J. gimmick, the historical connection is there.

Although he’s had a disappointing run in CMLL, Kawato was frequently involved with L.I.J. during his Young Lion tenure. The main issue negating this theory is the fact that Kawato has only been gone for seven months, as compared to Hiromu’s three years.

PAC had dropped off the radar since his WWE release, with rumours of legal issues (such as a 90-day no-compete clause) preventing him from officially signing with a new promotion. However, on October 2, the high-flyer made his return to Dragon Gate attacking Shingo and scoring a pinfall.

While this doesn’t preclude him from still appearing in NJPW as “X”, it certainly makes him a long shot. Either way, a western addition to L.I.J. would certainly shake things up. In addition to his re-debut with Dragon Gate, there is no historical link with any of the other members to suggest that PAC would make a natural addition to the group.

Dragon Lee is currently on an island, taking part in a reality show called Exatlon Mexico. Apparently he’s a big hit so far. Despite his brother Rush being Naito’s pal and founder of Los Ingobernables, it seems the timing is off for this theory. Still, picking the guy who broke Hiromu’s next to become his new stablemate is the kind of galaxy brain idea that might just work.

So, those are the top four names.

Plenty of others have been thrown out there: Austin Aries, Katsuya Kitamura, Jeff Cobb. Even current NJPW names like KUSHIDA, YOSHI-HASHI, Taichi and YOH have been mooted, with the latter being a tempting pick despite being scheduled as one of “X”’s opponents.

Either way, this little mystery has added an intriguing variable to King of Pro Wrestling that’ll have plenty of people tuning in.