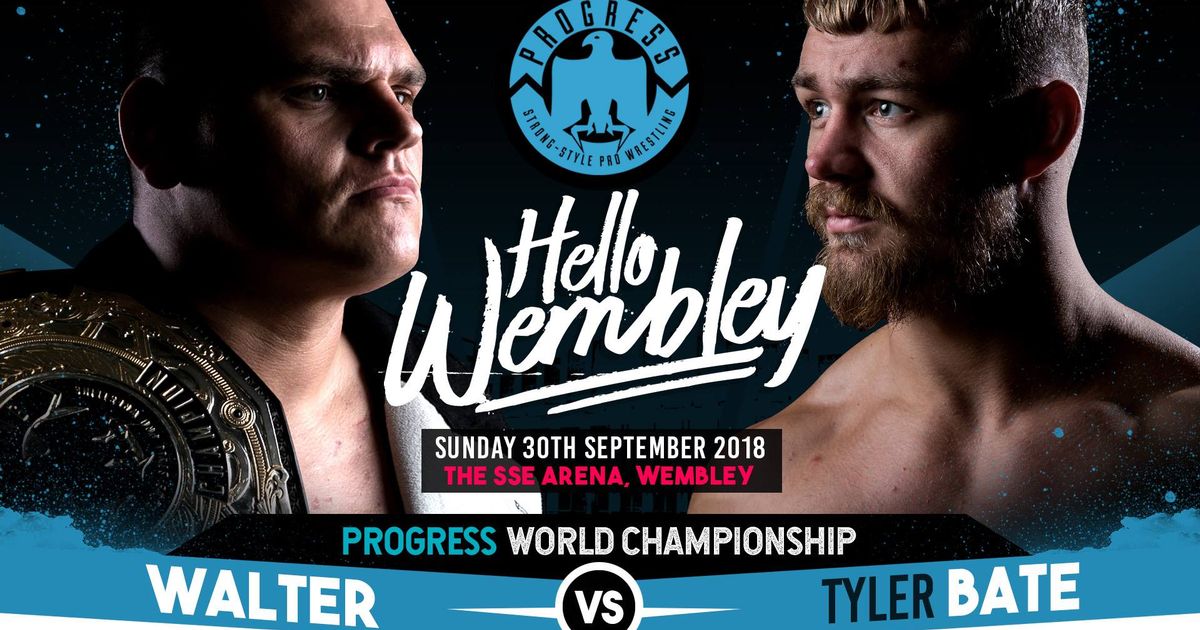 Suit Williams: Suit does a lot of previews and reviews here on Voices of Wrestling, and has reviewed almost every Progress show for PWPonderings since 2016. You can follow him on Twitter @SuitWilliams.

Suit Williams: This was meant to be Havoc vs Will Ospreay to end their rivalry, but the concurrent New Japan show in Long Beach pushed that up to Chapter 75. Paul Robinson cost Havoc that match and a spot in the World Title match, so he slides into Ospreay’s spot here. I expect a Havoc win here. The story is that he isn’t the Jimmy Havoc of old and can’t win deathmatches, so beating a returning Robinson would put a nice bow on that. All I’m hoping for is that this match comes close to the mayhem that was their deathmatch back at Chapter 21.

Lawson Leong: I am over the moon that Paul Robinson is back competing in Progress again. Even if it’s just going to be a one off, this man has been one of the less heralded pillars of the company and I still feel is, historically, massively underrated. The Ospreay match would’ve been ideal but I’m glad to see Robinson in this spot, and fully expect the violence to be turned up to 11 here. If Robinson is sticking around I could see him possibly winning here, furthering the Havoc regression storyline. Or maybe, this is where Havoc returns to the Havoc of old, the violent psychopath that everyone feared. Since Wembley is a culmination show, my money’s on the latter.

Suit Williams: The best feud in Progress by a country mile presumably comes to an end here, as former friends Dennis and Andrews battle for a World Title shot in a TLC match. Let me get my little nitpick out of the way, I’m not a fan of the stipulation here. This is a blood feud, and I would prefer this just be some type of no-DQ match. But other than that minor gripe, this is one of my most anticipated matches of the night. Eddie Dennis has been an absolute revelation as a heel, and the slow burn of this feud has made for a great build. As for who wins, I’ll go with Eddie. Progress needs a new big bad after Travis Banks was taken care of by WALTER, and there is no one whose earned that role more than Dennis.

Lawson Leong: Suit pretty much nailed my thoughts exactly. Eddie Dennis has been the best heel in Europe if not the world in 2018, and this feud has been (somehow, even with an unexpected injury) perfectly paced. I too, would’ve preferred a different stip. But I too, am greatly looking forward to this.

Suit Williams: Uncle Hunter was nice enough to let Matt Riddle off of the Largo Loop to do this show for Progress. There’s not much to say here, as there’s no backstory. Haskins had nothing to do after Morgan Webster kicked him off of his Thunderbastard team, and after he lost the #1 contender’s match to Tyler Bate at Chapter 75. I expect Haskins to get the win here, and for this to be an absolute belter.

Lawson Leong: Oh sweet, underrated Mark Haskins. How I long for you to get your due. Sure, you’re going to get to beat a big star on the big show, but with no build or story built into the match. Oh well, at least it will be excellent. The sleeper match of the show.

Suit Williams: This match is being billed as a battle between two of European independent wrestling’s biggest stars, but it doesn’t really feel that way. Progress hasn’t built up Dragunov as this big threat, as the only physical thing he’s done at a Progress show is take Dunne out with the Torpedo Moscow. Dragunov and wXw promoter Christian Michel Jakobi are a good heel act, but I don’t expect Dunne to lose in his home promotion while still WWE UK Champion. Still, this should be very good at the least, and the heat for it should be off the charts.

Lawson Leong: Ilja Dragunov is my favorite wrestler and when this was announced my hype level for it was off the charts. While this is still my most anticipated match of the show, I agree with Suit that Ilja hasn’t truly been built up as a credible threat to the audience, and it doesn’t feel like Dunne can lose as the UK champion. Still, I’m all about this as its one of my most anticipated matches of the year. I was a bit worried that Ilja wouldn’t translate outside of wXw. But given Dunne’s recent track record and the rave reviews for Ilja at BOLA this will undoubtedly be excellent and possibly the show stealer.

Suit Williams: I can’t wait to never hear the words “Tag Team Thunderbastard Series” again after this ordeal of a tournament. This whole thing has been a nightmare to keep up with. From people getting hurt, to partners getting swapped out because of goofy contract loopholes, to the grand prize of this four-month tournament being a 12 minute advantage in a gauntlet match. Plus, Flamita and Bandido are coming into this match the champs, and they weren’t even in the damn tournament to begin with! I have no interest in seeing another Thunderbastard after being live for the awful one in New Orleans, so I’ll just pick Aussie Open because I like them.

Lawson Leong: Look, I love a good Thunderbastard match. And I love a good tournament. You’d think that together, they’d be great. But alas, here we are. This has been nigh incomprehensible, and a lot of it is because of Progress’ unwavering need to push Chris Brookes. I like Chris Brookes, but his journey through this tournament has been mind boggling. Lykos got hurt, and then Brookes won the titles with Gresham, lost the titles with AR Fox (Yes, Ar Fox lost the Progress tag titles, titles that he never won) and now is in this match with Timothy Thatcher. The best part has been listening to Glen Joseph on commentary attempt to explain this nonsense. Outside of Roman Reigns has anyone been given more leeway to be involved/pushed in a major spot? Yes, all this for a 12 minute advantage in a match which none of the participants will have since the champs entering last didn’t have to be in the tournament.

…Match could be good though.

Suit Williams: Despite her being a personal favorite, I’ve not enjoyed much of Jinny’s reign as champion. Progress are leaning too much on House of Couture interference instead of letting Jinny be better than her opponents, which has been a long-time gripe of mine with this company. I expect more of the same in this match as far as House interference goes. While Toni and Millie are both talented and popular, it doesn’t feel like it’s time for Jinny’s reign to end just yet.

Lawson Leong: This build has been nonexistent. And why? There’s no excuse. As much as I enjoy Progress their booking of the women’s division and title has been one of my least favorite things. After a year of “gut kick piledriver lol Toni wins”, I thought things would change when Jinny finally got the crown but no, now it’s just interference matches where Jinny can’t even show us how talented a top heel she really is. What’s the story here? Toni lost to Jinny, then beat the woman that has legitimate history with Jinny in Laura Di Matteo. Then Toni gets hurt, so they have Millie win a scramble match, but then Toni is in the match anyway? I understand it but I hate it. There’s no narrative thread. It’s one of the problems with the star pool being small and your indie company drinking from the same one as WWE. I also would’ve liked there to be another women’s match on this show but…here we are.

I like all three women involved and maybe this’ll be great, but I am sorely disappointed in how we got here.

Suit Williams: This match has a very simple build. Doug Williams is old and about to retire, and Trent will be the one to put him away. It’s not exactly Ric Flair/Shawn Michaels, as Williams was a complete non-entity in Progress before winning the Atlas Title, but it gives this match some extra juice. There’s no question in the winner, as Seven would be a great base to rebuild the Atlas division around. Father Time is undefeated, and it’s had Williams on the ropes for a while now. Seven wins the title and gets some more gold in British Strong Style.

Lawson Leong: Even this has a great build! (I’m still mad about the women’s title match) With Walter stepping away from the division, this was a perfect story to fill the space. No one was going to replace WALTER, you had to do something completely unique, and Doug Williams’ road to his last match is as interesting and different as any. This has had a simple yet effective build/story and should be a solid enough match. You’d think the story ends with Williams going out at the biggest show of the year, but I don’t think Seven wins it here. I see Mark Davis cashing in his NPS win to defeat Williams at a later date. It’s clear to me that Davis is the future of the Atlas division.

Suit Williams: Even though this will be a main event caliber match, there’s not a main event build for it. Tyler Bate won the Three-And-In deal to get in the Wembley main event. WALTER is the champion. That’s it. No blood feud, no arduous journey to get to the main event of the biggest show in company history. Just a champion and his challenger, no different than a regular chapter show main event. But that doesn’t change the fact that this match is going to kick ass. WALTER is the best “final boss” in wrestling, and seeing him swat Bate around is going to be great. As will be seeing Bate hoss up and muscle WALTER around in turn. This match is really a toss-up, and the most unpredictable on the card. A lot of people thought Bate was going to win Super Strong Style 16 and be in this main event anyway. That, plus his affiliation with WWE UK leads me to think he’s winning. However, I’m going to say that WALTER retains here. He’s on a great run and he just won the title, and having him lose it this quickly would suck. This won’t be it for Bate though, because I think he’ll be Progress champion one day. It just won’t be September 30th.

Lawson Leong: Suit is right, this is a big boy match without a big boy build. NJPW and WWE have both messed with elements of this show, and it’s clear that the feeling of old Progress is lost, even down to the new, bad entrance themes. But all is not lost, since this main event will be awesome. It’s very possible that Tyler was supposed to win SSS16 anyway, getting his win back from Zack Sabre Jr. in the finals. After being so dominant in not only Progress but all over the world, I can’t see WALTER losing the title so quickly. He’s got so much of a run left. I don’t know when Tyler will disappear from Progress for good along with the rest of British Strong Style, but I expect he will win the Progress title at some point before then. But not here. This is the era of WALTER. 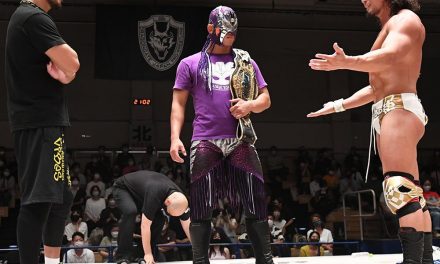