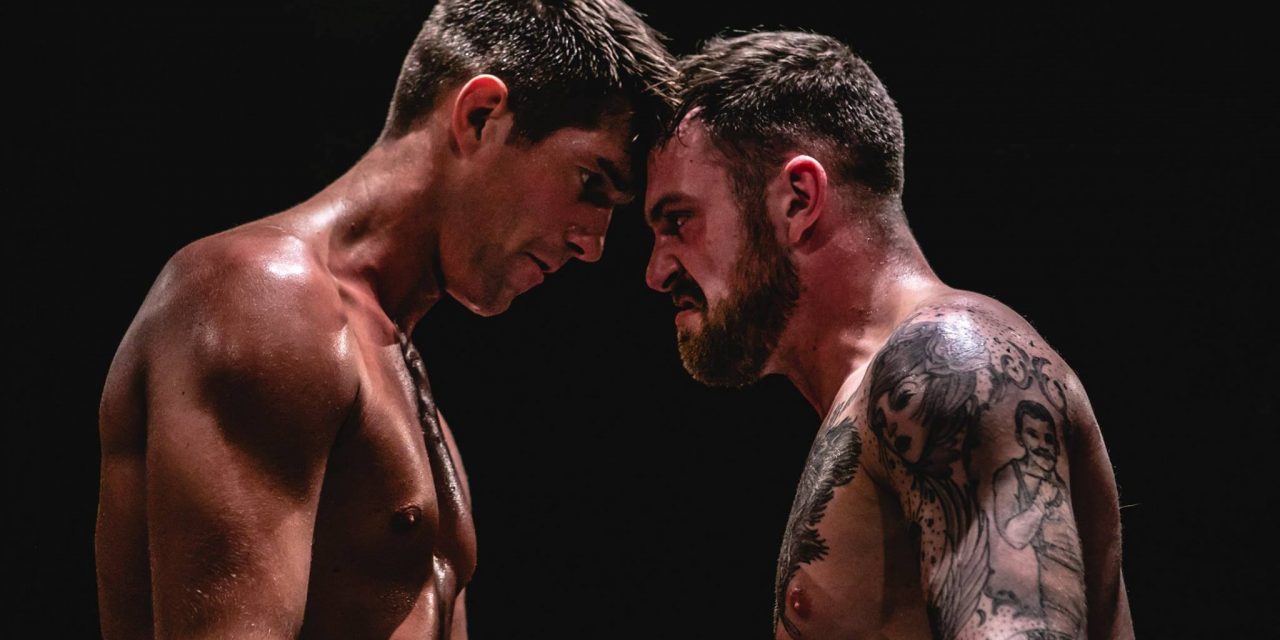 A Cockpit show, with commentary from Kevin Kelly, nestled amongst some exciting TV tapings and a tournament certainly promises to deliver some interesting wrestling. Two matches stand out— Starr/Juice and ZSJ/Ridgeway—but only one manages to deliver.

The ‘x’ in HxC tells us they are edgy and break the rules. This is evident from the start, when they attack the masked Arrows of Hungary before they can get in the ring.

The Cockpit faithful are treated to a solid, well-paced opener. It’s hardly exciting, but what it lacks in ridiculous high spots it certainly makes up in solid, interesting work.

Every wrestler here has a contemporary moveset that they are comfortable both executing and placing in a match. That’s not the sexiest way to describe competition, but it works here.

The Arrows of Hungary impressed with Dover’s sheer power and Arrow’s picture-perfect cannonball, but it was HxC that stood out. This wasn’t because of any particularly impressive spots, but by how they embraced tag team wrestling. They yell for tags. They beg the other to go for the pin. They make it real.

Overall, this was a by-the-books tag that went on a page too long. The blind tag to a school boy finish took the wind out of what would have been a very good match. ***

The Great-O-Kharn makes his awkward walk of shame to the ring, stumbling like a teenager after stealing his parent’s sherry. Kurtis Chapman, with his counterfeit ZSJ swagger, circles as the bell rings but is soon subjected to the strangest extended squash I’ve seen in a long time.

It reminded me of a comedian whose joke doesn’t land. The worst thing they can do is tell the joke harder. The story here didn’t work but they went with it vigorously, despite apathy from the crowd.

Chapman’s ‘Caps Lock’ armbar looked as awful as the name suggests and a late kickout felt flat. Kharn wins with a reverse suplex and continues his Rev Pro streak. *3/4

Gideon Grey is relentlessly British. He fits his gimmick perfectly; his arrogant sneer is a tribute to the comic relief the territory has embraced since wrestling began. His promo had the crowd bouncing and his bumping for his highflying opponents was superb. He’s the closest we’ll ever get to Rik Mayall in a wrestling ring.

2 Unlimited walk the fine line between 90s nostalgia and 90s cheese and they don’t do it particularly successfully. There’s a sense of irony woefully absent, leaving a feeling of backyard amateur instead.

2 Unlimited felt like TV jobbers going into business for themselves, working their way through a series of flippy moves learnt on a trampoline. They are impressive to an extent, but their straight face doesn’t quite work here. They need opponents that can match them flip for flip and the Legion of Lords certainly aren’t that.

Once Rishi Ghosh went into work mode, this match started to pick up slightly. It ended well, but wasn’t quite deserving of the ‘this is awesome’ chant that one fan tried to start.

Starr enters the ring like a petulant child, mouthing his monikers as if to convince us he deserves them. He delivers a stunning promo, laying out the life of an indie superstar. Bookings every night, travelling the world, elevating titles. He is desperate for us to believe the warped view he has of himself. He proclaims that he is a self-made man despite Rev Pro’s bias against him.

Then, we meet Juice. The juxtaposition is stunning. Juice is a self-made man. He left a comfortable spot to pursue glory and respect in one of the toughest territories in the world. He competes against the very best and has won fans along the way. Juice doesn’t need to tell people to love him or convince them that he’s world class. The audience know already.

Juice swats away shoulder blocks; he’s taken a million and one in the dojo. He toys with his opponent, putting his ridiculous hat on Starr’s head before dumping him out of the ring. Juice competes at a higher level, but he doesn’t account for the desperation of the insecure Starr. A few vicious stomps later, and the cruiserweight champion is in control.

The audience are then treated to a wonderful display from two top tier wrestlers. Juice resists clubbing blows and delivers one of the best cross body splashes I have ever seen. Kelly tells us that he learnt it from The Hundred Year Ace, Tanahashi.

Then, we see one of the most ill-timed, ridiculous comedy spots in recent memory. From out of nowhere, Starr suddenly dons Juice’s gaudy LED eyewear and confidently states that Juice wouldn’t hit a man with glasses.

I might be overreacting here, but in that moment,  I saw a cog rather than a motion. I saw a backstage conversation rather than impromptu combat.

One of the reasons I enjoy David Starr’s matches so much is his dedication to the character. It informs every promo, every match and every facial expression he makes. To me, he’s telling one of the most interesting stories in wrestling: the story of the desperate man. The man whose championship belt weighs heavily on him. The man who can be destroyed by a single dissenting voice in a crowd of thousands.

“You wouldn’t hit a man with glasses.”  It just doesn’t work.

The match did get back on track, but the fire quickly burned out. Starr decides to pick up the IWGP US title to strike Juice. ELP saves the day leading Juice to hit the Pulp Friction. A lacklustre finish that reeks of booking politics.

I wanted to love this match. It started so well. Disappointing. ***

A ring announcer claiming something ridiculous, like Pyscho Phillips having been ‘just released from the asylum,’ has an almost Pavlovian effect on me. I can’t help but cringe. The best wrestling characters are subtle, and cosplaying as the guy from Borderlands is certainly not that.

Phillips takes a respectable amount of punishment here. Bodom’s strikes are mean but Phillips keeps coming back for more. Both men exchange some impressive bombs in an incredibly hard-hitting match.

This is essentially an extended squash, with Bodom getting the win. Phillips didn’t embarrass himself, however. It would be nice to see him return with a more refined character. **3/4

Lucas bounds to the ring like an over sugared toddler, but quickly demands respect with some excellent submission moves. Priestley, however, is just too violent. Her hardened strikes quickly change the tone of the match. Lucas realises that she needs to embrace the brutality, or this will be a short contest.

Priestley’s submission work is superb. In a blink of an eye, she has Lucas tied up and screaming in pain. An excellent long submission hold leads to a babyface comeback for Lucas, but this is quickly brought to a screaming halt with an incredible backdrop. Priestley has the swagger of an experienced veteran toying with a lesser opponent, but it’s this arrogance that leads to her downfall. Lucas hit a bizarre kick out of nowhere and the shock of it leads to a quick victory for her.

The pace was quick, and the energy felt real. It was a very enjoyable match that had the crowd bouncing and restored my faith in a show that was going swiftly downhill.

The commentary for this match was awful. Neither man seemed all that interested in what was going on. If this match has been presented with a little more seriousness, it may have tipped it over the edge. ***1/2

Quildan is clearly getting behind Dan Magee. If it’s going to work, he really needs to look at how he is presented. The worst theme tune in history and gear your mum made for you is not a good combination.

Early on, Phantasmo insists on testing his skills against Jody Fleisch but Storm doesn’t oblige. Instead, Storm treats the youngsters to a free lesson in how to outclass and embarrass your opponent. The veteran team ooze confidence. They’ve seen, and disposed of, a million of these kids.

Phantasmo and Fleisch take this to the air as ELP tests his skills against the measuring stick. The constant handshakes cannot mask the wonderful battle of a youngster eager to prove himself and a veteran hoping he isn’t now a step behind.

Both teams have excellent chemistry. They swap control periods, passing on more and more energy to the Cockpit crowd.

Fleisch and Storm are like pit bulls pulling at a leash; eventually they break free and attack with bursts of high risk madness. An amazing backdrop double team move puts victory within reach.

ELP smashes Storm with a Tornado DDT before being taught a lesson in how the move should be delivered by the master, Fleisch. Men fly across the ring from all corners until ELP outsmarts the veterans with a sneaky pin.

This told a wonderful story of a young team testing their skills against experienced journeymen. Magee and ELP take the victory and a major boon to aid their elevation up the card. ***1/2

Wrestling matches can be won and lost a million different ways. Sometimes, the victor is the faster man. Sometimes, it’s the man who take the most punishment. Here, Ridgeway and ZSJ narrated a battle of minds. The most intelligent wrestler was going to win this superb competition. They poked and prodded each other, desperately searched for weakness and pounced when they did.

ZSJ is calculated, but Ridgeway is too emotional. For Ridgeway, the victory would be validation. He craves the respect ZSJ garners across the wrestling world and the scent of it almost overpowers him. In a battle of the mind, the cooler head prevails. No one is cooler in a violent situation than Zack Sabre Jr.

Too often, Ridgeway allows ZSJ to toy with him. Even when Ridgeway controls the submission, it’s only because ZSJ lets him. He’s waiting for the perfect counter, passing up opportunities in favour of the ideal transition.

Then, Ridgeway finds his strikes. That’s his path to victory. He can’t win with submissions, but he can scratch, claw and beat his way to the biggest win of his career. He exclaims his enthusiasm with huge German suplexes. But, Sabre is always the most intelligent wrestler in the ring. If Ridgeway has realised he can win a striking contest, Sabre realised it before the bell even rang. It’s back to the submissions, with an added sprinkle of glorious viciousness to mark his territory.

The battle of the smartest wrestlers is won by the man who makes the fewest mistakes and ZSJ wrestles the perfect match. Ridgeway, however, is still letting his emotions take precedent. He doesn’t want to take rope breaks, he wants to fight out of submissions. He wants to drop huge stomps even though his legs have been destroyed. He wants to outsmart the most intelligent wrestler there is.

Nothing puts you in your place like Orienteering With Napalm Death. Tap out, Chris. He’s better than you.

This was certainly a rollercoaster of a show, and it will probably be lost amongst TV tapings and the J Cup in Manchester. There are matches that should be skipped, but the last three matches are well worth a watch. The main event was excellent, but I can’t help but look back wistfully at Juice/Starr, imagining the match we could have got. 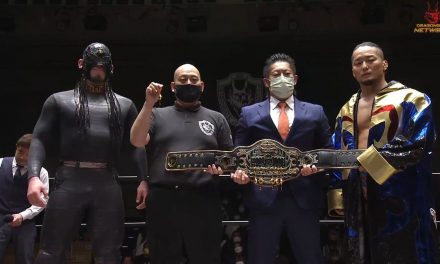