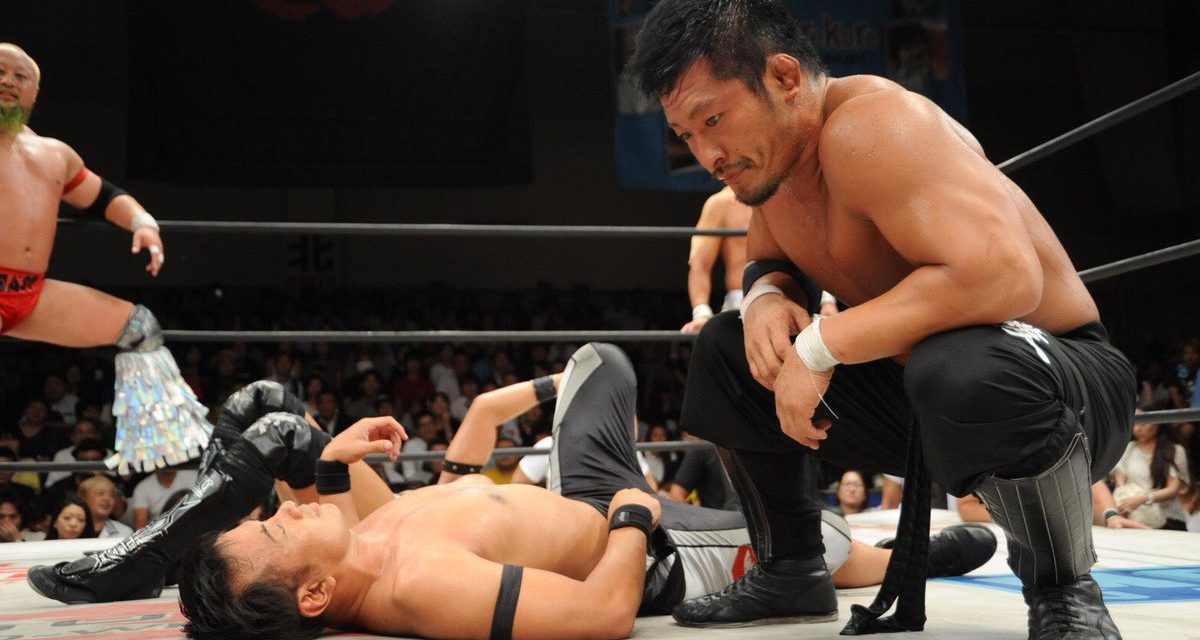 Shun Skywalker has finally graduated from the opening match slot on the roster, so this match felt different than the Korakuen openers have for quite some time. Instead of the match being built around Skywalker, a combination of Yoshioka, Shiiba, and Minoura got their chance to make an impression on the Korakuen faithful. On this night, it was Yoshioka who stood out from the rest, mostly due to the fact that he got the pin over Shiiba with a Frog Splash. Not the most exciting opener you’ll ever see, but this will be a good match to look back on in a few months to see if any of the youngsters can improve upon their performance in this match. **1/4

Dragon Kid and Kaito Ishida wore MaxiMuM shirts to the ring despite not being official members. I’m sure this match and the rollup victory they had made Yoshino and Doi scratch their chins really hard. Nothing says dominance like barely being able to pin Gamma.

This was a nothing match. It’s a shame that in a glorified squash, DK and Ishida ended up not looking as strong as they could have. Purely skippable. **

Hiroshi Yamato and KAI managed to not suck the life out of this crowd, but they still looked massively outclassed by Mochizuki. There is a polish that Yamato and KAI lack. They feel like outsiders in an inclusive promotion. It’s not that the two outsiders are bad (although I have never, ever enjoyed KAI), but they aren’t meeting the standards that a Dragon Gate wrestler should, and that became ever apparent here as even in a good match, they looked lousy next to Masaaki Mochizuki.

Unfortunately, it looks like KAI and Yamato are going to be sticking around as KAI pinned Watanabe just after the 10 minute mark. The back and forth in this bout was much more entertaining that the “comedy” that KAI and Yamato tried to implement into their prior DG matches. Even with the glaring talent difference, this is worth your time because it’s a competitive Mochizuki match. ***1/2

I would be stunned if Mack isn’t brought back for at least one more tour after this outing. For 12 minutes, Shun Skywalker (or “Shawn” Skywalker, as Mack would call him in his post-match promo) threw himself at the bigger and stronger Mack and Mack responded by flinging him all around Korakuen Hall. Skywalker didn’t lose anything in this match, but it appeared to have certainly raised Mack’s profile. Since the Californians standout debut, he’s worked in opening matches nearly every night, and this was his shot to prove that he belonged as a regular member of the roster. Mack proved that tonight.

Even if there is a case to be made that Mack should’ve been brought in years earlier, there is no denying that Dragon Gate made the right move by bringing him in. His agility and in-ring creativity help him fit in with the roster, while his size and strength help him become an eye-catching commodity to new viewers. He arguably adapted to the style quicker than Ricochet or Matt Sydal, and although most of his matches have been low-profile, he removed any doubt that he can hang at the big kid’s table. Had it not been for a Coast-to-Coast that just barely grazed the head of Skywalker, this would have been the perfect outing for Mack.

Even with that near-botch, Mack and Skywalker tore the roof off of Korakuen in an electric title bout. As I mentioned earlier, it appears Skywalker has grown out of the highlight reel, opening match worker role, and his now looking to gain footing in Dragon Gate’s midcard. This match proved that under the guidance of Mochizuki, he can continue to be a threat to the roster.

This match was great. It was just great professional wrestling in a company that badly needs it. I hope to see more of Mack by early 2019, because he has rocked in Dragon Gate. ****

“Mochizuki & Skywalker announced that they intend to challenge the winners of this Sunday’s YAMATO & BxB Hulk vs. Ryo Saito & Don Fujii Open the Twin Gate title match. They want their title match at Dangerous Gate 2018 on September 24th.” –iheartdg.com

In a shocking upset, U-T submitted Susumu Yokosuka with his new and devastating Bienllave hold. Ever since adopting a more llave-based offense, U-T has become nearly unstoppable. A win in the middle of the ring over an established veteran like Yoksouka, in Korakuen Hall of all places, will do wonders for U-T’s cause.

The problem is, of course, that U-T is not a top guy. He’ll never be a top guy, he shouldn’t ever be a top guy, and if I were Dragon Gate I would have a hard time trusting him with any sort of sustained pushed because of his tendency for injury.

With that out of the way, this match was great. I thought the opening portions of this match were a little slow and I was afraid that they were not going to be able to put a banger together, but of course they did. This was really all about U-T and Yokosuka battling back and forth, and arguably about how Yokosuka beat himself by insisting on hitting the Jumbo no Kachi instead of adapting to his opponent. This allowed U-T to fight neck-and-neck with Yokosuka and eventually submit the former Dream Gate champion. Great stuff. ***3/4

Ben-K finally turned his back on his buddies in MaxiMuM and linked up with his beefy counterpart, Big R Shimizu. This main event was excellent, but it was yet another Korakuen main event that ended with a messy finish. Last month, the Twin Gate match ended in a no contest when Big R turned on Naruki Doi, and the month before that was the flat Unit Disbands match between Over Generation and Antias.

This match showcased the feuds between Hulk and Takagi and Yoshida and Yoshino quite well. The former have hated each other for a decade now, and the latter have a Dream Gate match coming up in a matter of days in Sendai. I can’t say this match made me excited at the idea of Masato Yoshino and Takashi Yoshida headlining a show, but they certainly didn’t make me less excited, and that is a victory on the Yoshida Scale.

Ben-K speared Yoshino out of his boots to turn heel. Shimizu took the opportunity to plant Naruki Doi with the Shot-Put Slam for the win. This was a great match, but the finish took away from the greatness of this match in a vacuum, even if it made the post-match angle exciting. ****

“Ben-K betrayed MaxiMuM in the late stages of the main event, allowing Shimizu to pick up the pin on Doi. He revealed himself to be the newest member of Antias.
Big Ben will reunite for a grudge match against Doi & Yoshino on October 2nd.

・Eita announced a series of reforms for Antias.
①The unit will change their name at Dangerous Gate 2018.
②They are looking to expand to include wrestlers from other promotions and from overseas. They are planning on unveiling one of these new members at Dangerous Gate.” –iheartdg.com

After a rocky start, the second half of this card ended up coming through in a very interesting way. I have no idea what Dragon Gate will look like a month from now with the untimely departure of Shingo Takagi, the rise of U-T, and the major shifts occurring in the heel unit. I do know, however, that on September 6th, Willie Mack and Shun Skywalker stepped up to the plate, Susumu Yokosuka met a new foe, and Ben-K was given some fresh legs. It is hard to see Dragon Gate spiral out of control, but for now I trust that they will be able to find their wind and avoid an abysmal nosedive.