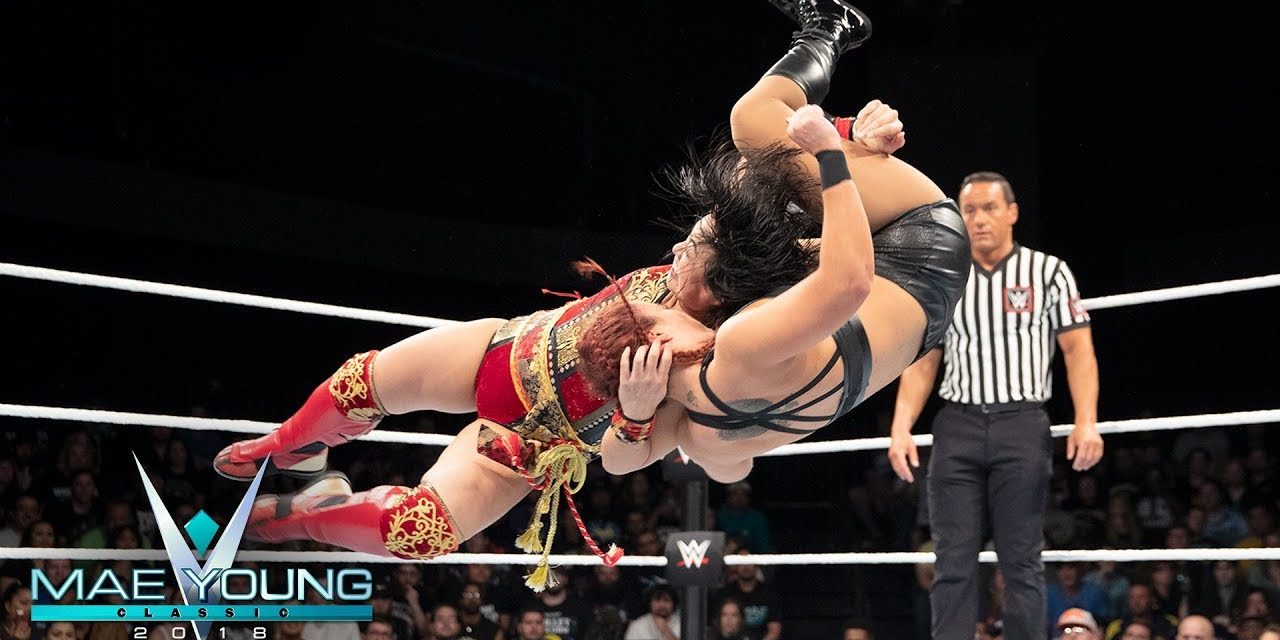 Welcome to the first night of WWE’s Mae Young Classic 2018. I’ll be your docent on this walking tour of women’s wrestling from around the world. I’ve seen many of the women competing here before, especially those who have made the trek to Berwyn to be part of SHIMMER, but there are definitely some new faces for me as well. To get things started tonight we’ll be seeing four matches from Round One.

Tegan Nox made her name on the independent scene in both the UK and the US as Nixon Newell. She has had some terrible luck with injuries since signing with WWE, and this tournament is her first real chance to show off the skills and personality drew the eye of WWE in the first place. Zatara is the first Chilean wrestler to enter WWE after, according to Michael Cole, “10 years of dominating the scene,” in her home country.

Tegan is getting a big push right off the bat, with Cole proclaiming Nox as his pick to win the whole tournament. Tournament gets off to a methodical start with the two engaging in chain wrestling, culminating in Nox busting out some Ricky Steamboat armdrags. Zatara shows that heel work in Chile is the same as heel work in America, and it is a great thing to know there is a truly international language since Esperanto never really caught on. Fake handshakes, telling the crowd to shut up, and some nasty targeting of Nox’s knee all come together to get Zatara into the bullying heel role.

The bulk of the match has Zatara in control, attacking the knees of Nox and keeping things simple and effective. After a double knee strike in the corner only gets a two count frustration seems to get the better of Zatara, as she gives Nox some space by attempting and missing a jumping knee to the back of Nox’s head. That opening is enough for “The Girl With The Shiniest Wizard” to launch her own knee into Zatara’s face for the win.

A very logical, if somewhat slow paced, start to the tournament. The match and commentary did a good job of establishing Nox as someone to watch in this event. I appreciated the sound logic underpinning the structure of the match, as both women seemed to be trying to win the match instead of just going from move to move until the match is over. **

Rhea Ripley is fresh off of winning the NXT UK Women’s tournament, and would love to pull off the double dip by winning this even bigger, more prestigious competition. MJ Jenkins is very sparkly and bouncy and the commentary team is talking about her booty shake and angel wings. This does not seem like a good sign for MJ Jenkins.

Even though she’s got the dark gear and eschews the pre-match handshake the crowd can’t help but be behind Ripley. Her physical presence grabs your attention immediately, and she opens up the match overwhelming Jenkins with her size and strength. If Jenkins is hoping that she might have an advantage in agility that gets quickly erased as Ripley catches her with a big dropkick as Jenkins is trying to bounce into the ring over the top rope. On the replay you can see Ripley’s feet connecting well above the top rope from a standing start. Just when it looks as though Ripley is going to cruise to victory, Jenkins fires up for a brief flurry of strikes and kicks, sending Ripley back on her heels. And that ends quickly. This turns out to be just a speed bump on Ripley’s road to the second round, with a missed charge by Jenkins leading to a huge pumphandle sitout powerbomb to give Ripley the win.

This match was never about MJ Jenkins, who was there mostly to give Rhea Ripley someone to toss around. Outside of a very brief hope spot this was a squash match, and I’m good with that. Ripley should be overwhelming lower-level competition, with their only moments of offense against her coming when her immaturity or overconfidence make Ripley lose focus and give them an opening. This was an enjoyable destruction, and I have very high expectations for Rhea Ripley going forward. Having not even turned 22 yet, she has the potential to be a cornerstone for the Women’s division for a decade. **

Vanessa Kraven is most likely the result of a science experiment run amok in the wilds of Alaska. I don’t know who thought trying to combine a kewpie doll with a grizzly bear was a good idea, but they should definitely be given more funding. Lacey Lane is coming from an athletic background and went through the Dudley pipeline, and has been signed to the WWE Performance Center.

The handshake shows the huge size difference between the two, with Kraven towering over Lane. Lane starts off the match using speed and athleticism to stick and move on Kraven, but quickly enough Kraven snatches her up and tosses Lane around like nothing. Big chops from Kraven send Lane reeling, but Lane escapes a tree slam to get back on the offense. A surprisingly back and forth match so far given the size disparity with Lane continuing to strike from distance and keep the Mountain off balance. After getting a 2.9 count off of a tilt-a-whirl slam, Kraven presses her advantage and misses a cannonball into the corner. Lane capitalizes on the moment with a crucifix bomb, giving Lane the win in what the announce team (and your humble reviewer) considers a major upset.

Lacey Lane is definitely being set up as the underdog story of the tournament so far, but her win wasn’t set up as a total fluke where Kraven slipped on a banana peel. The offense flowed evenly between the two competitors, and Lane came out of the match as a winner, not just someone who happened to fall on top of someone for three seconds. And Kraven looked like a monster who had every chance to win this match. A really ugly attempt at some sort of rope jumping move from Lane early on took me out of the flow at the beginning, but otherwise an inoffensive match. *½

Meiko Satomura is an absolute legend, and I was definitely not alone in being stunned when she was announced for this tournament. Killer Kelly is not the type to be intimidated by the history of her opponent. She is however influenced by Kane, so if there’s no one dragged to hell in this match I’m knocking a star off the rating just on principle. A star will be added if she appears as Corporate Killer Kelly.

Things start off with a kick exchange that Satomura gets the better of. I’m going to say nice things about Michael Cole later on, so let me balance that by pointing out his use of the phrase “technical technique,” and that is unacceptable. For those not familiar with Satomura and wondering if the praise is too much, Satomura moves from bouncing off the second turnbuckle into an armdrag that instantly becomes a single leg crab that she flows into a modified STF. And every bit of it was buttery smooth. Satomura controls the middle of the match, but Kelly refuses to just be to be a spectator or a foil for a legend to show off her skills to a new fanbase, continuing to stay in the match and frustrate Satomura by not going away. The tide turns when Kelly is able to lock in a dragon sleeper on Satomura while both fighters are sitting on the top turnbuckle. This leads to Kelly’s coming within a hair of pulling a huge upset. Unfortunately, for Kelly at least, this just seems to make Satomura angry, as she fired up nailing a Pele Kick and a Death Valley Driver for the win.

Though the match was a showcase for Satomura, Kelly showed some excellent fire and intensity. She never backed down from the strong style legend, and when she did get her chances on offense she made them look good and effective. As for Meiko…she showed off just a little of what her reputation has been built on. She looked regal and deadly throughout the match, and moved with an ease and style that made everyone else look a step slower and a little clumsy in comparison. ***

I liked the approach being taken in the first episode of the tournament. A couple of things really stood out to me as enhancing the viewing experience:

Everyone was presented as serious competitors, with pre-match video packages designed to make them seem strong and capable. The simple act of having brackets gives the event a structure and a grounding so rarely present on WWE programming. The actual matches, with small touches like the pre-match handshake and both competitors in the middle of the ring after the match as the ref renders a decision, had a much more UFC/boxing like atmosphere than the usual WWE spectacle. In each match someone won and someone lost. Some matches (Kraven/Lane) felt like they could have gone either way. Others (Ripley/Jenkins, Satomura/Kelly) had an air of the inevitable about them, just as in real athletic combat. If only WWE could treat their main roster as well as they’re treating these competitors thus far.

When I saw Michael Cole at the announce table my heart dropped. I tried learning Spanish quickly enough to switch over to their broadcast team, but I just kept asking people if I could buy a box of bathrooms. I resigned myself to my VINTAGE~! Fate, but then the oddest thing happened. Cole started doing a pretty good job. He absorbed some of the information on each competitor and was relaying it in a way that wasn’t obtrusive. He deferred to Reene Young and Beth Phoenix at appropriate moments. At times his enthusiasm felt over the top and a bit forced (“It’s Meiko Time!”) but on the whole he never detracted from the event, and at times actually added some value. My expectations are usually quite low for WWE announcing, so if they can maintain this level throughout the tournament I will be extremely pleased.

To get four matches in, along with generous pre-match promo videos, entrances, random Natalya interviews, etc., all in one hour requires things to be kept pretty simple. No match gets a lot of time right now and that can often lead to a mess, with both people trying to get their stuff in and just trading random moves until time is up and they go home. None of these matches fell prey to that. All four had an internal logic that held up from bell to bell. Whether it was Ripley dominating Jenkins, or Zatara trying to keep Nox grounded by attacking the knees, everything simply made sense.

Overall, episode 1 of WWE’s Mae Young Classic 2018 was a solid episode. Nothing earth-shaking, but also nothing eye-rolling. A Joshi legend graced our screens, and one of the possible future building blocks of WWE gave a glimpse of the future. See you next week as four more first round matches take place in the Mae Young Classic.