There’s no question that the public perception is that the WWE’s roster is stagnant. When wrestlers join WWE, they don’t tend to leave either by their own will or WWE’s. This isn’t a criticism (we’ll get to that later) but just the truth of the situation.

In December, Ziggler will be in his 10th year as the Dolph Ziggler character. That’s not counting his days as Spirit Squad member Nicky. 10 years just as Dolph Ziggler.

To put that into perspective Hulk Hogan’s entire “Hulkamania” run lasted just nine years with obvious gaps due to movies and other reasons. The Rock’s entire run in the company—at least on a full-time basis—lasted only five years. 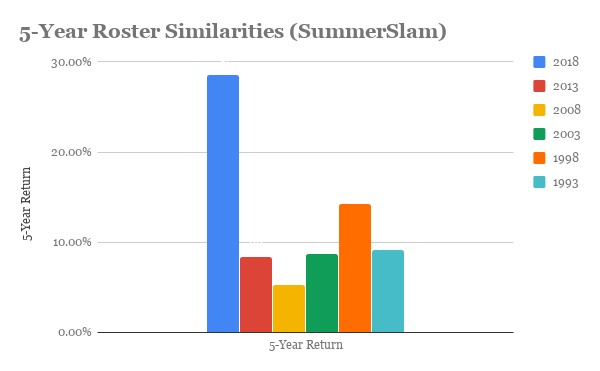 SummerSlam 1998 was the most surprising entry in this with five performers carrying over from 1993 including Billy Gunn, Luna Vachon, Owen Hart, The Undertaker and The 1-2-3 Kid. All of them were in very different positions and characters five-years later and two (1-2-3 Kid/X-Pac & Luna Vachon) had tenures in WCW between the SummerSlams.

Sunday’s SummerSlam did fare well in terms of 10-year roster similarities scoring second lowest at only 7.1%. 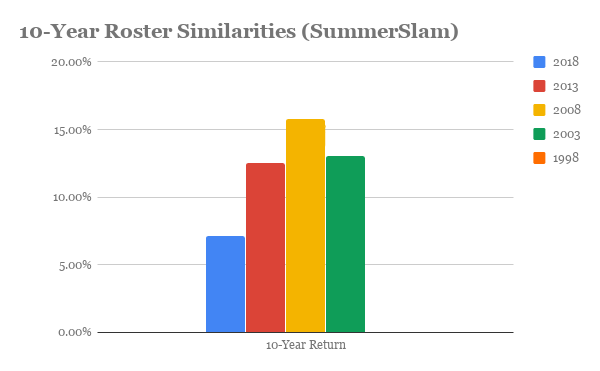 And finally, the five and ten year similarities plotted together to view trends. 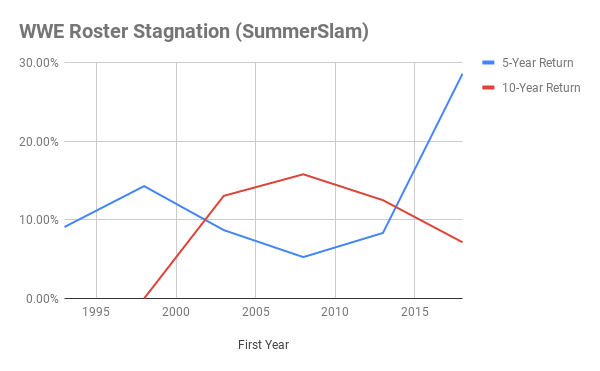 So what’s the conclusion?

For one, your eyes aren’t deceiving you. The WWE roster is as stagnant as ever when we use this criteria. It’s not perfect but it lets us study a bit of the WWE roster makeup. Equally important is the spot each performer is in compared to five years ago. It’s one thing if former lower-card wrestlers have now moved up to the main event, that’s the way things are supposed to play out. Would you say that any of the names that appeared on SummerSlam five years ago—Big E, Brock Lesnar, Daniel Bryan, Dolph Ziggler, Erick Rowan, Luke Harper, Natalya and Paul Heyman—are in dramatically different spots than they were on SummerSlam 2013?

As you’ll recall, Bryan won the WWE Title that night defeating John Cena but was beaten/screwed over minutes later by Randy Orton and Triple H. I didn’t count Orton in my dataset since he only briefly appeared on SummerSlam last Sunday. Likewise, Dean Ambrose who wrestled on the SummerSlam 2013 pre-show, was not included either (I didn’t count pre-shows or dark matches).

And maybe I should have because adding Ambrose and Orton makes the point stand even stronger. In 2013, Ambrose was accompanied to the ring by Shield members Roman Reigns and Seth Rollins. This was five years ago. On Monday, the Shield reunited. If we included the SummerSlam 2013 pre-show and added Orton in as a performer for his few second cameo on Sunday’s show, the number for SummerSlam 2018 rises to 41.4%.

Nearly half of the people who appeared or performed at SummerSlam 2018 also appeared on the show five years.

It makes sense that the WWE roster would stagnate these days. WWE has gobbled up talent from all across the world and is far more shrewd in their talent acquisition than they were even in 2013. The rise of NXT has given WWE a fruitful developmental territory while increased hours of television and a lack of mainstream North American competitors has made it easier for them to build and hold onto their roster. Likewise, due to similar reasons, the talent roster themselves are less apt to move on to another company or quit all together.

Add it all up and you have a roster that’s undoubtedly stagnant — whether that’s a positive or a negative is your preference. 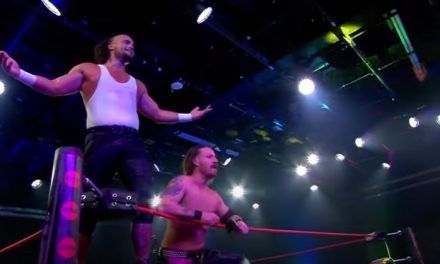 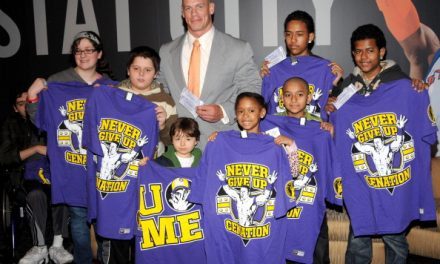 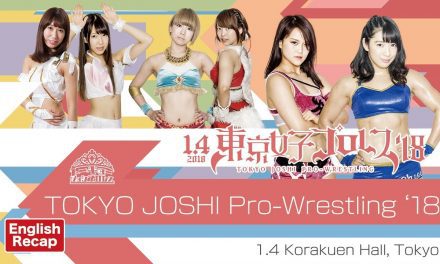