It’s Friday night, and Joey Janela is lost in New York! A somewhat concerning fact, considering he’s lived in the area his entire life (Jersey is close to New York, right?), but understandable, since New York is very big. I was a big fan of both Spring Break shows, as I appreciate Janela’s propensity to bring in whatever Japanese legends he enjoyed watching in his youth. This will be a fun, zany show so therefore, this will be a fun, zany review, depending on the quality of the show. If you are looking for a super-serious rundown, X out and read some other boring review, where they’re afraid of their own shadow, because this review’s not changing! Onto the show we go!

The band Wheatus was present to play the song Teenage Dirtbag for Nate Webb’s entrance. Given that I was not alive when Teenage Dirtbag was at its peak, this does nothing for more, especially since the band members look like they are trying to be the woke college professor version of Slayer.

The first thing I noticed when these two went into the crowd to brawl was a gentleman in a CZW Best of the Best t-shirt, which, considering the whole GCW vs. CZW rivalry, is pretty fucking risky. He should watch his back as he’s leaving the venue. When all said and done, this was a fun comedy match, involving a spot where both men tried to imply that the other had cheated by using a chair. The singer of Wheatus came out and hit a shitty DDT on MJF, which was amusing only for the fact that the man is not intimidating in the slightest. MJF got the win with… well, I already forgot, and the finish just happened. Fantastic! A fun comedy match featuring one of the best heels in the business today. ***½

The man who answered KTB was a wrestler named Marko Stunt, who recently made an appearance in the Scenic City Invitational Futures Tournament. After his performance in this match, I am honestly shocked that Stunt hasn’t found bookings elsewhere, because this dude fucking rules!

Other than the fact that he may very well be under five feet tall, he has capabilities to flip around like Rey Mysterio, as he hit so many cool looking flips in this speed vs. power matchup. Voices of Wrestling favorite KTB also ruled in this match, as he dismantled his small opponent by tossing him around like a wet rag. I do not joke when I say this match was legitimately amazing, a breakout performance for Marko Stunt, a performance that will surely gain him many bookings in the future. Therefore, I shall look forward to seeing him in NXT as “Stuntman Markanovich”. Watch this. ****

After this match, we were blessed with the presence of “Big Stoke” Stokely Hathaway, who was accompanied by Wheeler Yuta. They cut a promo, average stuff, nothing special, WHEN ENTER SANDMAN HIT. THE SANDMAN himself then proceeded to make his entrance, which will never not rule. The segment went exactly as one would have thought, with Sandman caning Stokely a couple of times and then promptly leaving through the crowd. The month of Stokely’s nightmares continues.

One insane motherfucker has left the ring, and two more have entered it. Teddy Hart actually showed up despite his uncle’s funeral being on the same day of the show. Although, maybe it shouldn’t be shocking, as if there is one thing Teddy Hart is known for, it’s for making his dates. It appeared that Teddy was coping with his uncle’s tragic death in masochistic fashion, as he took no less than five nasty apron bumps from Dickinson.

Once the actual match got going, it turned out to be a boring affair, with the only highlights coming via amusing commentary lines, such as stating that Teddy Hart is an international superstar who has defeated the likes of Kenny Omega and Daniel Bryan, and that this match was so hot that Al Gore should make a documentary about it! Way to have your finger on the pulse of America, random commentator man. Teddy Hart won while I got distracted on Twitter. **½

They advertised food and drink sales while introducing the next match, making about six dick jokes in the span of a minute. This show is living up to its expectations.

Just when you think Joey Janela couldn’t get any more crazy, he booked motherfucking Sabu to replace Meng in this GCW Heavyweight title match. This was surreal to watch, as despite his age, Sabu looked surprisingly competent. In an unfortunate spot near the end of the match, Sabu slipped as he was climbing up to hit the Arabian Leg Drop, which gave Gage an opportunity to piledrive Sabu through a closet to retain his title. Sabu maintained control for 80% of this match, an affair that turned out to better than I expected. That’s all you can ask for out of a Sabu match in 2018. ***

During the intermission, I “treated” myself to a 1995 New Japan match contested by Antonio Inoki and Sting.

It was a very strange match, one where Inoki got dominated the entire contest by the pro-wrestling offense of Sting, before locking in a choke on Sting and winning the mini tournament that was being held on the show. It was a *** match, one I would not recommend.

After two fine matches and a twenty minute intermission, the mojo I had from the first two matches was effectively dead. With this match, my mojo was unfortunately still dead. This was exactly what it looked like on paper – five men (and Orange Cassidy) doing a bunch of cool flips and moves to get the crowd going. However, flips can only take a match so far, and in my eyes, this lasted long past its expiration date. If I had to compare this match to anything, I would call it a shitty version of the TakeOver six way ladder match that was widely acclaimed over Mania weekend. After committing literal murder twice, Jimmy Lloyd (yuck!) grabbed the brass ring, meaning he gets to book his match at Spring Break 3, which is eight months from now. 15 minutes too long. **

And while I’m down, Joey Janela decides to kick me some more, putting on a match that is sure to keep my mood dour. Look, I have nothing against Page or Ford, but they aren’t the type of wrestlers who garner much emotional investment from me. Nick Gage joined the commentary booth, and sounded like the most intelligent person there, all hail the king, MDK. By winning this match, Ethan Page apparently retained his soul. Unfortunately, I can not say the same. *½

The novelty of seeing Jinsei Shinzaki in 2018 is the appeal of this match, and a match of the year level classic can’t be expected as a result. When Shinzaki locked in a nerve hold five minutes in, it left me worried for how the rest of the match would play out. Thankfully, these two didn’t overstay their welcome (the first match on this card of which I can say that for), ending out of nowhere after an avalanche nodowa otoshi (which I totally knew and didn’t have to Google). It’s hard to rate this match since it was meant to pop the live crowd, but for us at home, it was fine for what it was. ***

When Matt Riddle turns up in the crowd at TakeOver tomorrow, I will remember one thing about his final indie match. That thing, of course, is PCO winning after D. Destro electrically shocked PCO back to life. PCO is fucking nuts, man. I may have preferred the WALTER match at Spring Break, but this match was no slouch either, a contender for match of the night. They set out to kick and chop the shit out of each other, and their goal was accomplished, as both men left with a reddened chest. Farewell Matt Riddle, it’s a shame you had to die so early. I truly wish I had more to say about this match, but unfortunately, this show has burnt me out to the point where I can not wax poetic about a match I truly did enjoy. ****

Bookended by two great matches, Joey Janela’s Lost in New York was ultimately an underwhelming show for me. From Hart/Dickinson to Page/Ford, it was hard to have much interest in the card at all, and when you add a thirty minute intermission in there, I am bound to lose interest. The star-making performance of Marko Stunt and Matt Riddle’s potential final indie match are the standouts on this show, which is worth a watch if you are able to turn off your brain and have some fun. Also if you are able to acquire liquor. Lots of it. 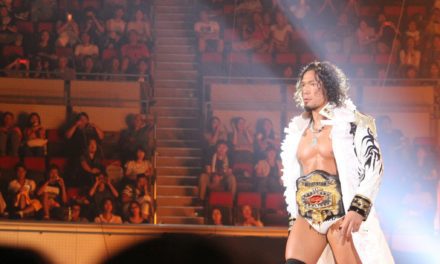