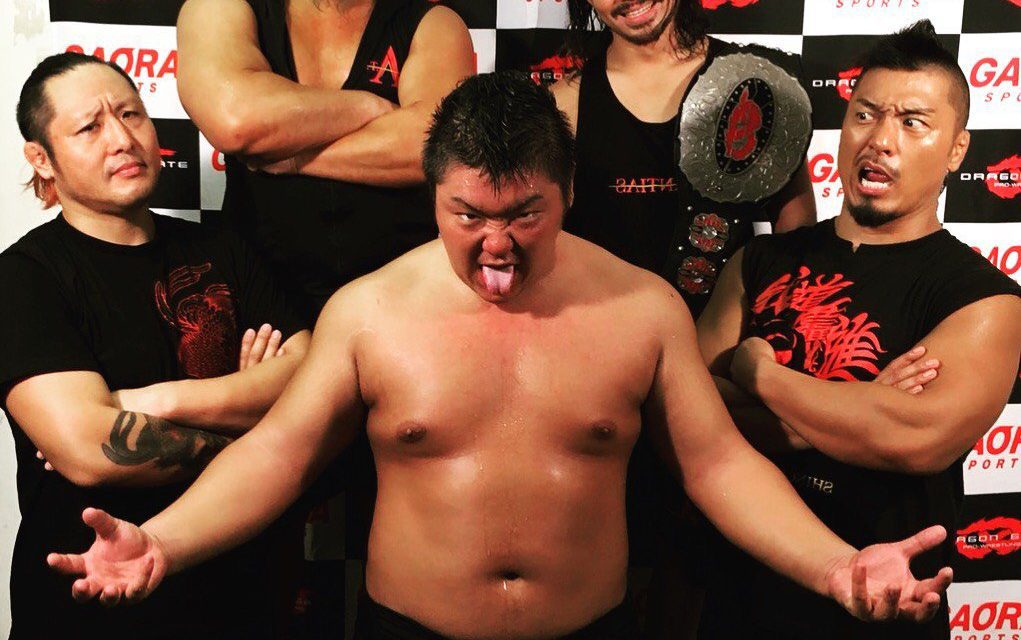 I came into this match excited to U-T, who has been studying the llave style and has picked up victories on the first two dates of the Gate of Adventure with his new move, aptly titled “Bienllave”. However, U-T was nothing more than an afterthought in this match, as the focus was shifted to Oji Shiiba and Kota Minoura. The latter debuted at the July Korakuen show, and not only does he already have gear, but he picked up the fall over Shiiba in this match. The finish came across as Minoura outsmarting Shiiba with a roll up, rather than just getting lucky to get the win. This was exciting. A recommended opener. ***1/4

Ishida escaped a furious offensive attack from Kanda and rolled him up for the three count. Three moves, in and out. Can’t argue with that. **1/2

Yamato and KAI can skip right back to All Japan or Wrestle-1 or wherever they please to work, but I have no use for them in Dragon Gate. This was the usual Maria spots without any of the comedy, because KAI and Yamato don’t have the timing or instincts that the Dragon Gate roster has. This went 10 minutes, and probably eight too long. *3/4

This is a match that only Dragon Gate could pull off so well. A tornado-style 3 vs. 1 match on paper should never work, and it should never be this entertaining, but throwing Mochizuki in the mix with three hungry youngsters made this kind of match work, and I’m still baffled by it.

Mochizuki eliminated Yoshioka early with a Dragon Suplex, and from that point on I was convinced that Mochizuki was going to find a way to beat all three youngsters, and although logic says no one should be able to beat three men, if it were ever to happen, it would be here, with Mochizuki, an icon, beating three rookies. That did not happen, however, as the quickness of Watanabe and Skywalker was too much for the aging vet. Skywalker nailed his signature moonsault and pinned Mochizuki in the middle of Korakuen Hall.

This match was Dragon Gate magic, even if it wasn’t a great match. I don’t know how they made this match so logical, but they did, and for that, I applaud them. ***1/2

“Mochizuki declined to form the new unit with the three youngsters as it would only be detrimental to their growth. At their insistence, he agreed to start Mochizuki Dojo under two conditions:
1 – It’s not a unit. They will team together or fight each other based on the situation.
2 – Anyone can come and go as they please” –iheartdg.com

Let’s get the bad out of the way first: after defeating Eita in a singles match on the 8/4 show in Kyoto, Punch Tominaga earned a Brave Gate match at Gate of Origin on September 9th. Not only am I not crazy about that booking, as Punch should be past the point of getting any sort of title shot, but he was made to look like a goof for most of this match. His comedy spots with Fujii, Saito, and Mack were funny, but it didn’t feel appropriate given the recent title match he secured.

That aside, this match kicked ass. I don’t know if gaijin has ever adapted to Dragon Gate as quickly as Willie Mack has. He looked locked in from the opening bell in Kyoto, and he only built on that momentum in this match. PAC took a minute to find himself, Ricochet took a few months for his body control to match his athleticism, and more recently, Peter Kaasa showed that he had incredible high spots, but was unable to put together full, compelling matches. Mack laps Kaasa’s in-ring skill, and has found the charisma that took PAC a few tours to find and has the body control that Ricochet needed. Simply put, on this night in Korakuen Hall, Willie Mack was a star.

While this wasn’t a MOTYC, this was Dragon Gate clicking on all cylinders. Comedy spots with Fujii, Saito, and Punch delivered early, Kzy put forth a championship level effort, and Mack delivered the goods in arguably the biggest match of his career. This match rocked.

It should also be noted that at the time of this review (August 7), Mack is 4-0 in Dragon Gate. He’s been brought in as a winner. I can’t wait to see where he goes from here. ****

Despite there being no continuation to a possible mask vs. hair match between Dragon Kid and Eita, this match was very good. I should note that Kid’s performance in this match, now that he’s away from the lackluster Over Generation unit and partners like Gamma, Kaito Ishida, and Problem Dragon, was way better than the output he’s had so far this year. He and Yoshino looked good teaming together.

Speaking of the current Dream Gate champion, he was destroyed with a Pineapple Bomb from Yoshida and was pinned in the middle of the ring. It’s nice to see Yoshino have an immediate direction coming out of World, it’s just a shame that it has to be against Yoshida.

The action in this match was good, though. As mentioned, Dragon Kid stepped up his game, Ben-K and Shingo seemed determined to stiff each other into submission, and the battle of opposites between Yoshida and Yoshino is never great, but it is far from bad. ***1/2

“With his pin on Yoshino, Yoshida earned the next Dream Gate title shot. The match will have one wrinkle. Falls can’t be earned via flash pin and cradle type holds. The date and place will be announced soon.” –iheartdg.com

This match ended in DQ when Antias ran in and attacked the four competitors.

I’m not sure why this DQ couldn’t have just been segued into a post-match attack, because the match was becoming at the point when Eita and his goons ran in and attacked. YAMATO had survived a Shot-Put Slam and a Bakatare Sliding Kick, and Hulk had once again been folded up in a Shot-Put/Powerbomb hybrid, just like at Kobe World. I would’ve loved to see YAMATO somehow fight back to pin Doi, then have Antias run out, because I hated seeing the first defense for YAMATO and Hulk end in a DQ.

The match itself was very good, and with a finish I imagine I would’ve ended up in the ****1/4 range. Doi found himself helpless to the offensive onslaught of Tribe Vanguard in the early portions of the match. I found it interesting that YAMATO and Hulk chose to isolate him in the early goings. Perhaps they knew that they could outsmart Shimizu in a two-on-one affair, or perhaps they thought that Doi was the weaker of the two and they focused their early match energy on him. This came to a head when Shimizu laid on top of Doi to stop the constant stream of boots to the face, a la Kenta Kobashi and Mitsuharu Misawa from June 9, 1995.

The MaxiMuM duo battled back from there and the match rocked up until the finish. Shimizu needed a change because he has peaked in MaxiMuM, but I hate seeing anyone I love go to Antias. It won’t happen, but in my dreams Shimizu will end up Shot-Putting half of his stablemates to form a new heel unit. For now, though, he’s flanked by Eita, Takagi, Yoshida, and Kanda. Eita is a champion, Takagi is a made man, Yoshida is challenging for the Dream Gate soon, and Kanda is a fall post. Obviously, Yoshida won’t win the Dream Gate which can relegate him back into fall-taking territory, but on paper, Antias is stacked, and now with the addition of Shimizu, I don’t expect to see them losing a lot over the next month.

If you’re popping back into Dragon Gate and you want to be tuned into the fall storylines, this match is worth watching. The action is great up through a disappointing DQ, but that DQ is going to help mold DG in the future. I can’t give this match a rating, but I can give it a recommendation if you’re watching Dragon Gate for more than just stars on a spreadsheet.  NR

“Big R Shimizu betrayed MaxiMuM to join Antias. YAMATO & Hulk agreed to help out Doi, Yoshino, & Ben-K just this one time and will team with them in a 5 vs. 5 match on the September 6th Korakuen Hall show.

Dragon Gate’s Gate of Adventure put me in a good mood. Other than a needlessly long match with two outsiders and a non-finish in the main event, this is what I want from a Dragon Gate Korakuen. The youngsters shined, the match quality was high, and there is a clear direction for a chunk of the roster as this tour progresses. I felt hopeful about Dragon Gate for the first time in forever after Kobe World, and they didn’t let me down with this show.

I am not in love with the two title matches that have been set up, as Takashi Yoshida and Punch Tominaga are arguably the two least credible challengers on the roster (not counting rookies), but it is clear direction, and we haven’t always gotten that in this 18 month creative tailspin.

It took a few months, but Dragon Gate seems to be coming to grips with CIMA being gone. BxB Hulk is winding down his career, but YAMATO and Doi are proven main eventers and barring any health related issues, they should be main eventing for the foreseeable future. Big R Shimizu cemented himself as a top tier wrestler in the main event tonight, and I hope his push reflects that of a main eventer as we move forward.

Thumbs up for Dragon Gate’s Gate of Adventure. This show had a certain energy to it that Dragon Gate has struggled to find this year. The opener is essential for those interested in DG’s future, and from the Mochizuki match onward, I think everything is worth watching. 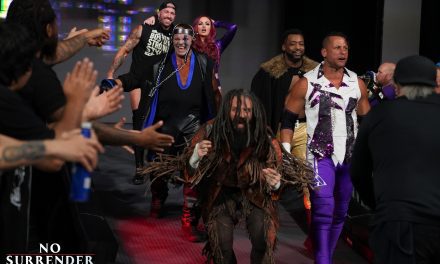 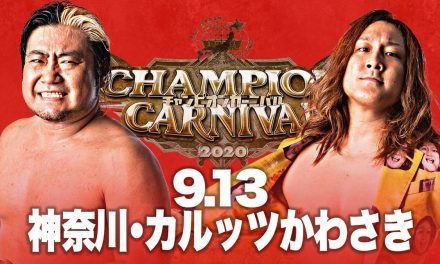