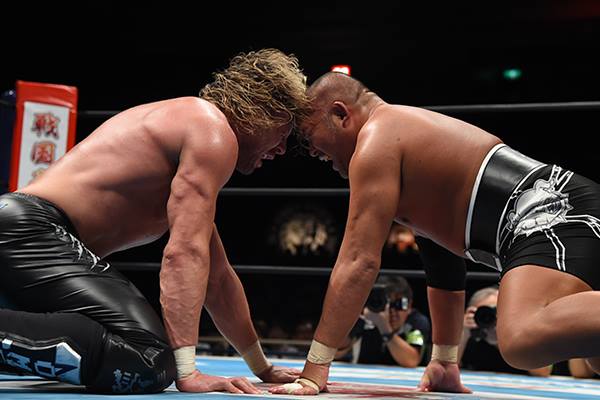 What’s this? I’m reviewing a show and it’s not the A Block? Is this allowed? I’d better get this written quickly before Rich realizes that I’ve escaped the A Block.

We’re starting off at a sprint! Yano mugs SANADA in the aisle and ties his feet together with a t-shirt, resulting in one of the most believable countout teases of the entire G1. Because Yano is Yano, the audience buys that a G1 match could end in 30 seconds in a countout.

I know a lot of people don’t share my opinion, but I really enjoy Yano, even when he’s in his usual comedy mode and not having four star matches with Ishii and Zack Sabre, Jr. SANADA meshes well with him, which is interesting given that he doesn’t show a ton of personality. He serves as both the straight man to Yano’s antics as well as an opponent willing to engage him on his own turf. SANADA isn’t really trying to hit Yano with much real offence – the Paradise Lock and a rolling infinity cradle are staples of his attack in this bout.

Rocky Romero helps Yano escape a countout by freeing him from the Paradise Lock, but that comes back to bite him. After pretzelizing Yano around a security railing, SANADA cuts off Rocky’s second attempt at helping Yano and puts HIM in the Paradise Lock as well, ending this fun affair in a countout. There’s a funny touch at the end where it appears that Milano Collection AT offers his services to instruct the Young Lions on how to free Yano and Romero so they can vacate ringside and the show can continue. **3/4

If you had told me when Camacho joined the Bullet Club and had some really terrible tag team matches that he would be the most entertaining part of a G1 Climax act, I would have thought you were an idiot. Yet, here we are. Tanga Loa’s introductions are far and away the most consistently enjoyable part of the Firing Squad’s G1 matches.

This is the second Tama Tonga match I’ve watched in this year’s G1. Unless I’m reviewing a show, the Firing Squad are automatic skips for me – the matches just aren’t worthwhile in a tournament famous for it’s insane match quality. Fale, at least, will have a handful of four star matches dragged out of him by Tanahashi or Okada. I don’t think Tama Tonga has had a single G1 match, in his entire history in the tournament, that I thought was notably good. The guy just isn’t an interesting singles wrestler. As I typed that, Tonga tossed Goto to the mat with a terrible-looking powerbomb that I don’t think was supposed to turn out the way it did.

I’m sure you’ll be absolutely stunned to learn that Tanga Loa interfered regularly, and there was a ref bump. The highlight of this match was undoubtedly the sequence in which Goto and Tonga rebounded off the ropes repeatedly, trying to outwit each other until eventually Goto hit an Ushigoroshi.

Red Shoes continues to outsmart the Firing Squad by being the only referee in wrestling to show any awareness of context and what has happened before he replaced the assigned referee. I actually really like that.

There is no reason at all to watch this match, just find a GIF of the run-around spot. **1/2

The last match I recall between these two was in the tournament to crown the first United States Champion. I loved that match, so I’m looking forward to this rematch. That was the first match where I remember Juice being really impressive, and looking like he could be a player in New Japan. He’s only gotten better since then. I wasn’t a fan of Zack Sabre, Jr. prior to his New Japan tenure, but he’s grown on me.

This starts with Sabre being goaded into throwing hands with Juice, which is a poor decision when you’re known for being a technical wizard. Zack realizes this after discovering that one of Juice’s strikes is equivalent to about four of Sabre’s, and decides that using his grappling magic on Robinson’s injured hand is a better course of action. Sabre is a cocky little shit, though, and can’t help himself when the opportunity to taunt Juice arises – he kicks at his hand, slaps his face, and tries to show the dominance that he utterly failed to assert in the striking exchange to begin the match.

Juice’s hand injury forms the narrative crux of this contest, as Sabre is able to attack it whenever he needs an advantage. It’s an obvious choice, but obvious doesn’t mean bad. Much like Tanahashi in past years, Juice is using his injury to craft stories within his matches as well as a broader story throughout the tournament. Juice’s frustration with the attacks on his hand finally boils over – he rips off the tape, hands it calmly to the referee, and plows Sabre square in the face in a moment of catharsis. Unfortunately for Juice, this does even more damage to his hand, and Sabre is able to catch him in an elaborate submission hold. The US Champion valiantly tries to hold on, but it’s too much – Zack Sabre, Jr. wins via submission, and makes it clear that he wants another crack at Juice when the US Title is on the line. ****1/2

This is another match that can trace a path back to the tournament to crown the first US Champion – Omega and Ishii met in the finals, with Omega claiming victory and the championship in what many considered a five star match (I think I rated it at 4.75, so I was also in that ball park). I think the structure of the G1, with it’s more compact matches, really helps Kenny Omega. Omega is prone to excess and main events that are long for the sake of being long, but that weakness is hidden in the G1 – he simply doesn’t have enough time to indulge his worst match structure habits. Ishii, meanwhile, is a more-or-less perfect G1 wrestler – it plays so heavily into his strengths that it’s no surprise that many of his best matches of the year will come in this tournament.

Omega starts off by trying to be comedy Omega, and playing drums on Ishii’s head. The Stone Pitbull will have none of that, and you can see his anger rising with every blow Omega lands, be it one intended to hurt or taunt. When Ishii has had enough, he unloads on Omega with thunderous, punishing strikes – and some patronizing bops on the head. This early exchange informs the structure of the entire match. When Omega hits his high-powered offence, he can really do some damage, but he can’t help himself and keeps slighting Ishii’s toughness, which results in Ishii smacking the piss out of him.

My favourite thing in modern pro wrestling is Tomohiro Ishii standing stoically, a statue of some forgotten war god, while his enemy rains blows upon him. Just waiting. When his time comes, he destroys them with a single strike. I mentioned in a previous review that I love the rugged tough guy who’s all guts – Ishii is the apotheosis of that concept. No matter how much offence Omega throws at him, no matter how many V-Triggers land, it’s just a matter of time before Ishii gets mad and tries to kill him again.

Speaking of V-Triggers, when Omega starts throwing them, this match kicks into top gear. By the time Omega hits a springboard double stomp to Ishii on the apron, even the Japanese commentary can only react with an English “hooooly shit.” I agree. I don’t even know what to say about the finishing stretch. It was so fucking intsense. By the time the count of three comes, Omega is bleeding profusely from the mouth, and it’s ended up on his forehead – it made Ishii’s brainbuster look like it cracked Omega’s head open.

This was fucking incredible. *****

I was in a conversation the other day about who the MVP of the A Block is. In the B Block, I’m not sure there’s a conversation to be had – Kota Ibushi has been unbelievable. The conversation isn’t around if he’s the MVP of his block, but how he stacks up to the best runs of the Okada era. I rated his match with Ishii 5 stars, and have had multiple other bouts at 4.5 or greater. Everything the Golden Star touches is turning to… well, gold. And stars.

This match has some pretty significant implications for the block, after Omega’s loss to Ishii. Omega, Ibushi, and Naito are the only ones left alive in the block, and it’s likely that Ibushi or Naito will be in the G1 Final in Budokan Hall. That gravitas does not seem lost on the competitors, and there’s some reservation shown early. Naito does his usual disinterested slowpoke act, which the Osaka crowd are very vocal about showing their disdain for. Ibushi, impulsive and impatient, tries to force Naito to engage him. All he gets out of it is an attack on his knee. Naito seems content to grind Ibushi down and bask in the boos rained down from the Osaka fans.

Early on, Ibushi finds the most success when the pace picks up, while Naito is most effective with a methodical, grinding attack. Much like in his match against Juice Robinson, Naito tweaks a lot of his signature early-match offence to attack Ibushi’s knee instead of his head. The pacing of this match is interesting, as it feels like they started off at what would be the mid-point of the heat segment in most matches, and progress from there. Both of these guys bump like maniacs, so transitional moves in the mid-match look like they should kill a normal person. It seems like Ibushi takes damn near every back bump on his neck.

The face/heel dynamic in New Japan is often blurry, as the audience cheers their favourites regardless of alignment, but Naito is definitively the bad guy to this Osaka crowd. They want to see Kota Ibushi kick Naito’s smug smirk into the fourth row so they can try to catch it like a foul ball, and Naito revels in it. Conversely, when Ibushi hits the Swan Dive German Suplex, the pop is so loud that there’s probably structural damage to the arena.

When the final bit of the finishing stretch starts, it looks like the match is happening on fast forward. Ibushi counters a Destino into something resembling an Emerald Fusion, but spikes Naito right on the crown of his head. It looks horrific in the best possible way. A flying knee and a Kamogoye later, and Kota Ibushi looks to have set himself up for a block-deciding showdown with Kenny Omega in their first singles match as heavyweights in NJPW. Possibly ever in NJPW? I’m too pumped about wrestling to do research right now. ****1/2

Two of the best matches in the G1 happened back-to-back on the same card, and the third-from-the-top match was over 4 stars. Go watch this, now.