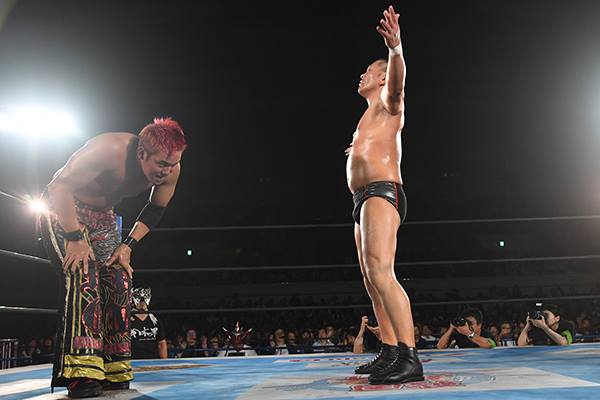 Here are the results from today’s undercard:

None of these matches went longer than seven minutes, so check them out if you want.

According to Tonga Loa, Bad Luck Fale eats pussy. Wonderful. It’s Bad Luck Fale vs Michael Elgin with a torn bicep, your expectations can’t be too low for this one. However, I was surprised at how decent this was. It certainly wasn’t anything to look out for, but it was as good as you could hope for this to be. Of course, there was Firing Squad nonsense and a ref bump, but that was minimal as well. Tama Tonga hit Elgin with the chair to get Big Mike the two points. Again, this went as well as you could imagine it going. This loss officially eliminated Fale from winning the block. **1/2

Hangman Page’s music is very reminiscent of The Ecstasy of Gold by Ennio Morricone, one of the iconic songs from The Good, The Bad, and The Ugly. It makes sense too, since Page has the blonde hair and blue eyes of a hero from an old Western. Hey Andrew Rich, I’m available for Music of the Mat any time pal. The match was fine, but nothing you’ll remember after the show. This was notable because it is Page’s first pinfall win of the tournament, and despite his diminished capacity nowadays, Makabe is still a former IWGP Heavyweight Champion and a damn good statement win. ***

YOSHI showed some fight, but Jay White got the win and jumped into the double digits with this win. White has the tiebreaker over both Okada and Tanahashi, so he’s got a fighting chance to win the block. White was constantly barking at YOSHI-HASHI and at Rocky Romero on commentary about some guys in CHAOS being too hard-headed to follow his lead and win at all costs. This story of Jay White starting trouble in CHAOS, combined with the win over Okada, will almost certainly lead to something big in terms of the unit. They wouldn’t run this story during the G1 if it wasn’t gonna lead anywhere. That’ll be something to look out for. The match was a YOSHI-HASHI special, in that it was decidedly average. ***

EVIL has done absolutely nothing of note thus far in the G1 so far. No real standout matches, no story development, nothing. He’s just faded into the background with eight of the most nondescript points you’ll ever find in a G1. This match continued the trend, as it was fine but nothing really great like you want from him. Tanahashi hit EVIL (the wrestler) with EVIL (the move) and followed it up with the High Fly Flow to take the outright lead in A Block. This was EVIL’s last stand, as this loss to the block leader eliminates him from the running. ***1/4

Suzuki and Okada have gone to 30-minute draws twice in the past calendar year, at last year’s G1 and at Minoru Suzuki’s 30th Anniversary produce show. I guess the dye-job and his weird balloons made the difference. This was the best match on the card by far. It was your typical Suzuki/Okada fare, where Suzuki slapped the piss out of Okada, and Okada valiantly fought back and got the win with a spinning lariat and the Rainmaker. This loss knocked Suzuki out of contention as Tanahashi has the tiebreaker over him with two matches left. It’s down to Okada, Tanahashi, and Switchblade for the top spot in A Block with two block shows to go. ****

Suit Williams has been a Voices Of Wrestling contributor since 2017, and he co-hosts the Smark Sports podcast. He can be found on Twitter @SuitWilliams.