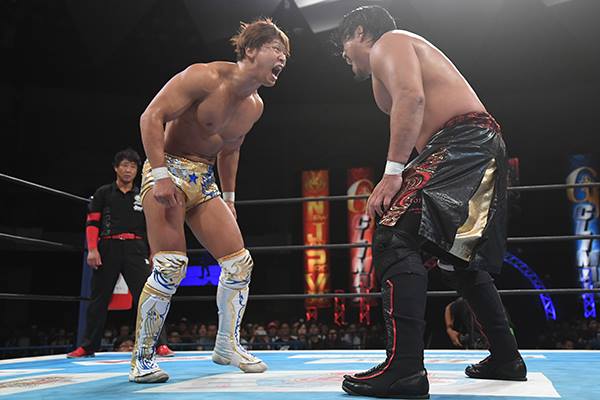 To say the least, this match lowered his average. There have been far more offensive Tama Tonga matches in this tournament, but this was still eye roll inducing at times. The focus of this match was not on Tonga and Ishii, but rather on Tanga Loa, who constantly made his presence felt on the outside. He burned Ishii once, and from then on, Ishii did his damndest to thwart any attempts.

During Loa’s second interference attempt, Ishii grabbed him and rolled him in the ring and delivering a big series of strikes. Tonga was able to capitalize on that however by DDT’ing Ishii to the mat. Loa would try once more, this time with a chair, but Ishii was able to fire up and take the chair away from the Tongans. He wrapped the chair around the back of Tama Tonga, but it wasn’t enough for the three count.

Finally, after Ishii had survived the usual Tongan shenanigans, Bad Luck Fale, who was waiting in the wings, ran down and nailed Ishii with the Grenade. Ishii kicked out, but was quickly hit with a Gun Stun which put him down for the count.

Ishii surviving so much nonsense was good to see, and everything before the Fale run-in was so dramatic that I was on board with this match way more than I have been any other Tongan match. The Fale run-in was too much for me, however, and because of that, I just can’t recommend this match. ***

This was a very competitive match between two wrestlers who are one tier away from being world class talents. SANADA has seemingly stalled out in the middle of this tournament, while Juice is just now heating up.

Perhaps it was the desperation of Juice not wanting to fall flat and end up with only 2 points, but whatever it was, Juice attempted to beat SANADA with his own moves. After an awesome forearm exchange on the outside, the two rolled back in and Juice found himself soon after using the Skull End. He tried to follow that up with a moonsault, but that failed.

After a brief moment of offense, Juice Robinson decided to take off his cast, making his left hand legal, but as Kevin Kelly pointed out, one strike with that hand could lead to more serious damage. SANADA at this point became frantic to get a win, but was unable to capitalize on locking Juice in the Skull End once again. Juice escaped, whacked SANADA with his left hand, and nailed Pulp Friction for the win. Recommended. ***1/2

A Yano comedy match. His string of workrate-type matches is over. Naito survived three different exposed turnbuckle attacks, and won by dropped Yano with the Destino. Nothing to see here, but nothing to complain about either. **1/2

The greatest thing about Zack Sabre Jr in New Japan is that he has created an environment in which you cannot take your eyes off of him when he’s in the ring. At any moment, he can grab onto a limb and twist it until his submission is forced into submission. He has counters for everything, and submissions for every limb mastered. This match with Omega was a battle of Omega’s power vs. Sabre’s finnesee. Omega, now as a world champion, has power moves. His offense is full of moves that register in the cheap seats. Snap dragon suplexes, the V-Trigger, and of course, the One-Winged Angel.

Sabre is an artist. His submissions are so sporadic and unpredictable that not every detail is going to be picked up by everyone in the building. These two could not be more different in their wrestling styles, and in this bout, they came together to create one of my favorite G1 matches yet.

Zack was always one step ahead of the champion’s big moves. The Terminator dive was cut off with an ankle lock, which led to a display of submissions on the entrance ramp, which is something Zack has done a lot lately, and I love it everytime. How many times do you see an STF done on the ramp? There is something so violent about Zack doing all of his submissions outside the ring. It comes across as someone who isn’t just using a wacky submission to win a wrestling match, but someone that genuinely enjoys strangling people and ripping them apart, piece by piece.

The Brit would go onto counter the One-Winged Angel twice, each time grabbing onto a piece of Omega and from there, finding the leverage needed to grind him down into a submission, and as we saw in the New Japan Cup, when Zack Sabre Jr has a submission locked in, the match can end at any moment. As the match rolled into the finishing stretch, Omega hit another big time, big building move as he powerbombed his way out of Sabre’s Triangle Choke. He hits a V-Trigger to follow, but a second attempt is countered as Sabre rolls him into a Half Crab – I DIDN’T THINK THAT WAS POSSIBLE!

Omega would escape and had the awareness to block a PK minutes later. Another attempt at the V-Trigger was blocked by Sabre, but a follow-up attempt connected, if only slightly. It was enough, however, to daze Sabre, giving Omega the opportunity to roll him up and pin him for the 3 using a fancy cradle.

This match rocked. There are a lot of great wrestlers on the planet right now, from WALTER to Seth Rollins to, well, Kenny Omega, but no one on Earth is better than Zack Sabre Jr right now. Every match he has is full of drama. I can’t take my eyes off of him in the ring, because I never know when the match is going to end. I’m never bored watching him wrestle. This match was excellent. ****1/2

There was nothing structurally wrong about this match, but it didn’t grab me the way that the prior match did. This was Ibushi’s homecoming match, and I must admit that I was impressed with the way the Kagoshima crowd took to him. The result of this match seemed to actually matter to these people, and had Ibushi lost, they would’ve been unhappy campers.

Goto’s tournament has been a mixed bag for me. His match with Ishii is a MOTYC, his match with Omega was very good, but I wasn’t in love with his match vs. Naito and now this match with Ibushi. Perhaps it is the fact that he’s already eliminated from the G1, and his effort, motivation, and desperation levels are all down, because Goto has been a guy to lead the charge on the last few days of the G1 in years past.

Ibushi had his neck worked over for a good chunk of the match, which halted a lot of his flying. If anything, this match was needed as it was a good reminder that Kota Ibushi is a heavyweight, and he can lift someone like Goto up for the Last Ride. Ibushi gained the edge with his power moves before rocking Goto in the face with the Kamigoye. A soft recommendation for this match. ***1/2

Kaiten from Goto, but Ibushi flips through and hits a huge lariat!! #NJPW #G128 https://t.co/4ULitIni5Z pic.twitter.com/BnYZZrDlOS

Night 12 of the G1 Climax was another strong night for the B Block. Juice Robinson and SANADA stepped up to the plate and delivered a banger to help improve match quality, as Tetsuya Naito was stuck on Yano duty this evening. This show had three very good-great matches, which is impressive considering the best two workers in the block were paired with the weakest two workers in the block on this show.

Sabre vs. Omega is the real highlight on this show, as the match quality was great, and the result makes the block very, very interesting. SANADA and Sabre both now have a magic number of 1, as they sit at 3-3 and Omega, at 6-0, has the tiebreaker over both of them. I’m stunned that Sabre won’t be in play on the last day, but that is just a great example of how cutthroat the G1 is.

View updated standings at voicesofwrestling.com/forums. Special thanks to our contest sponsor EGGSHELLS. Order Chris Charlton’s new book on the history of pro wrestling in the Tokyo Dome at at https://amzn.to/2udtlwQ. 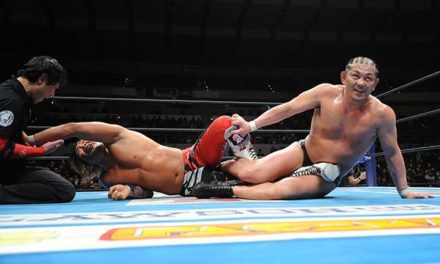