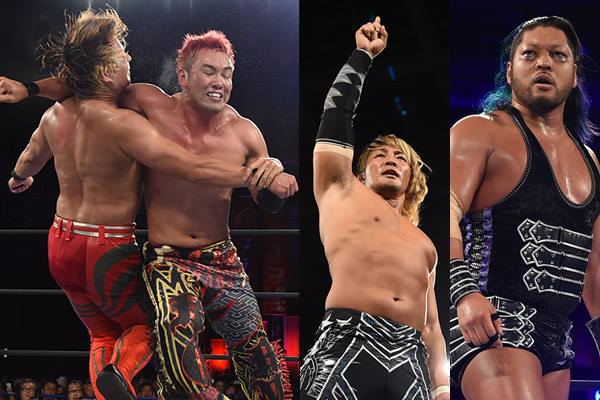 So let’s look at what we can expect for this show. Will Okada continue to regain his mojo against stablemate and lackey YOSHI-HASHI? Will Jay White’s cheating overcome Bad Luck Fale’s cheating? Will Suzuki and Elgin have a better match than their terrible match at Destruction last year? And most importantly, will I be able to actually focus on this review while chasing a six month old baby that just learned to crawl? All these questions, and more, will be answered soon.

Little happens on the undercard, except by previewing Naito/Goto and Ishii/Ibushi, I have to wonder what insanity lead me to reviewing this show instead of tomorrow’s.

This will be a shocker, but after a few minutes, Suzuki and Elgin start brawling through the crowd. Suzuki wraps Elgin’s arm around all manner of ring ropes, chairs, and barricades, forcing Elgin to chop with his weaker arm. Elgin’s doing a pretty good job of selling the arm attacks, which is not always a strong point for him. And just as I type that, Elgin goes into his powerbomb combo’s, ignoring the past eight minutes of work. So no need to bust out the Selling Awards for Elgin just yet. Minoru counters a suplex attempt and slips behind Elgin with a choke, then the Gotch Style Piledriver, which shortens Elgin’s neck and keeps him down for three. This was a fine opener, but doesn’t do much beyond that. Still beats their Destruction match though. ***1/4

Hangman had the biggest question marks for me coming into this tournament. His matches with Kenny and Ibushi were good, but would he be able to deliver nine matches in a row against a myriad of opponents? So far he has. I love him leaning into the Old West gimmick just enough to be cool and not enough to be corny. EVIL does his baseball chair shot, which is always neat, but hilariously distracts the referee by sliding a third, decoy, chair into the ring, which of course takes the ref a solid minute to remove, leaving plenty of time for EVIL to nail Page with a home run. It’s a back and forth, hard hitting affair once they get back in the ring, and it’s really damn good. EVIL wins with the EVIL STO, but I want to see this match again, on a bigger stage. EVIL could finish this tournament with some really strong performances, with Fale and YOSHI in his review, and the main event players coming up. ****

The battle of New Zealanders! White takes out Tanga Loa before the match, proving once again he is the smartest man in this tournament. But it’s for naught as Fale distracts Red Shoes with a chair and Loa comes back. White smashes Fale into the barricade and takes Kevin Kelly and Rocky Romero off air. White starts hilariously chucking Young Lions at Fale outside the ring. Switchblade and Fale brawl back into the ring, and I am reminded of those single cam shows with no commentary as Kelly and Romero are still out of commission. We get the obligatory rep bump and interference from the Bullet Club OGz, leading to a Bad Luck Fall for the win. This was fine, but I wanted more cheating. If that’s the gimmick these guys are going to run, they should have gone all out here. ***

English commentary is still down as this match starts, but slowly begins to get back together as the match goes on. Rocky Romero is apparently a wrestler, manager, commentator, producer, and audio engineer as Kevin Kelly gives him credit for fixing their issues. Meanwhile, there’s a match going on, but it’s a match you’ve seen literally dozens of times before. Even Kelly is like, “yep, these guys have wrestled a whole lot of times.” Tanahashi wins with a couple High Fly Flows. I don’t know, I have nothing much to say about this one, it was the same match they have had the past several years. Technically solid, but unremarkable. ***

Usually I wait until the match is over before writing who won and who lost in the spot above this blurb, but I’m just going to go ahead and fill this one out now. YOSHI looks like he’s going to throw up as he’s walking down the ramp, but that might be him trying to be intimidating. Inspiring confidence in me he is not. Okada feels the same way I do about YOSHI, as he just treats him with utter disrespect. Okada hits a Rainmaker, but it’s the hilariously awful sit down Rainmaker he used against YOSHI in their first match at WrestleKingdom 6 so many years ago, and I literally laughed out loud. What a troll job from Okada. Like most YOSHI matches, there was a looooooong Butterfly Lock spot, which, c’mon. The move never wins! YOSHI has some nice transitions into it, but it’s a terrible move. Anyways, YOSHI gets a few close spots, but Okada wins with the Rainmaker. Obviously. I should probably rate this higher, but I just can’t take YOSHI-HASHI seriously. ***1/4

EVIL and Tanahashi lead A Block with 8 points, with Okada, White, and Suzuki right behind them. We’re at the point in the tournament when the leaders start separating themselves and the riff raff starts falling insurmountably behind. This show was an easy watch, but nothing on it was necessary viewing except maybe Okada’s trolling and a really good Page/EVIL match. 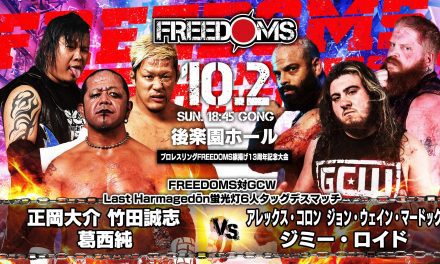 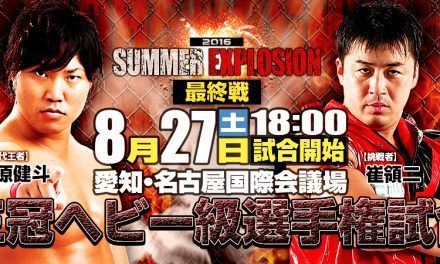 The Resurgence of All Japan Pro Wrestling & Summer Explosion 2016 Preview