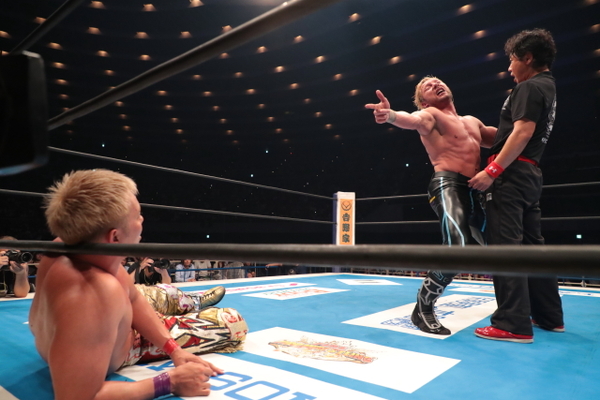 This month we got the highest rated match in history by Dave Meltzer, but there was quite a bit to sink your teeth into between NJPW’s big Dominion show, another stellar NXT Takeover, and the Best of the Super Juniors Finals. The cherry on top? a deathmatch some are calling the best they’d ever seen.

You can follow me @Lawsoncomedy89 and my ace Jack Beckmann @packerman120 who does the polls each month over at voicesofwrestling.com/forums. You can listen to my podcasts Talking Smark (about wrestling), Talking Naruto (about Naruto) and I have a comedy special at Lawsonleong.com.

The title match follow up to their excellent Best of the Super Juniors encounter which saw Desperado’s breakout performance; this match delivered to a similar degree but in a less surprising way. Both of these men have a devil may care, car crash style, which conveys a sense of chaos when they step in the ring together. They’re also both great at conveying hate through their reckless offense and snug striking. Their first bout was the fresher of the two and opened a lot of eyes on Desperado, but this match showed us that it wasn’t just a fluke; these two men have excellent chemistry.

I watched this match live and it’s one of the best matches I’ve ever seen in person. This was exactly what it should’ve been: WALTER systematically executing a young masochist. Allin’s clever hope spots were perfectly timed and Walter’s beatdown was enthralling to watch. This will go down as one of the best matches in EVOLVE history. WALTER is on another level.

Admittedly, this isn’t my preferred genre of pro wrestling. But these two men are undeniable stars and their hot feud came to a head in this contest. My favorite spot was LA Park giving Rush a Kamigoye and then taking a bump from his own move. It was wild, it was a brawl, masks were torn and it feels like it’s not over yet.

My podcast co-host and best boy Benel Germosen wrote a piece on this very site about what we both loved about this match, so I don’t have too much to add. The melodrama worked for some and was too much for others. One thing I really took away from it was how violent the babyface, Gargano was here. Many may take it for granted if you follow BJW or GCW, but this level of violence isn’t something the NXT product has showcased very often, if ever. I prefer the first match but this still marked a great chapter in this ongoing saga.

When it comes to Lucha, this is more my speed. Cavernario is a wild man and I hope he doesn’t kill himself one day. His high spots rival guys like Hiromu when it comes to being impressively death defying. Fenix is one of my absolute favorite wrestlers. These two men were extremely innovative and worked a blistering pace bell to bell. They also had a neat story built around the use of the cutter, as Fenix utilized several variants of it before getting caught with one himself by Cavernario down the stretch. This was a really great movez match that is easy to digest and doesn’t require any context to enjoy.

This was the best progress match we’ve seen in months. Will Ospreay owns the ring in the Electric Ballroom. He strutted around before the bell like he was in his living room. He’s a no doubt top 10 wrestler in the world this year, and watching him in a PROGRESS ring is truly special. Jordan Devlin had one of his best performances to date, and is someone who’s improved vastly since his unfortunate outing at 2017’s WWE UK tournament.

Ospreay’s dickhead heel antics just ramped up the crowd to a fever pitch so when the big spots came the reactions were thunderous. The closing stretch is one of the best I’ve seen all year, with reversals I didn’t even know were possible. I hope they do this match again in OTT, where Devlin is King, because they could have a very different match but of similar (or maybe even superior) quality.

This was one of the best tag matches of the year and in NXT history. And that’s saying something. Even if the crowd was more into Undisputed Era being cool heels, Lorcan and Burch were undeniably fantastic in this match. I’ve been all in on these two since they had their singles series months back, and I was glad to see them get this stage to show what they could do, even if the fans weren’t complying with the character alignments.

O’Reilly and Strong were great of course. But I truly feel Oney Lorcan may be the best minute for minute wrestler in the entire company. He’s even awesome when he’s getting squashed. I knew this could be the show stealer going in and I feel vindicated by the result. I really hope we get to see more from Lorcan and Burch, but if this was their peak, at least we got this.

Jesus this was insanity. I’m not a deathmatch guy, but this was incredible. This was a fast paced, well worked, psychologically sound and properly escalated deathmatch. The escalation of violence is so key to me in these types of matches, because the wrestlers are leading us on a violent journey and the peaks have to feel right.

Kodaka is a great Japanese worker who I don’t get to see enough of and Masashi Takeda has been a revelation in his role as BJW’s deathmatch ace. This man has come out of nowhere to become a viable Wrestler of the Year candidate for many people. And I’m all in. His title reign is one I have to follow closely from now on. This isn’t your prototypical garbage plunder wrestling, folks. This man is a deathmatch wrestling genius and I encourage everyone to get on the bandwagon now.

The Best of the Super Juniors finals have become one of the high points for not just NJPW, but pro wrestling in general over the last several years. Since I began following in 2014, these matches have always been incredible. This was no different.

Taiji Ishimori put in one of the best performances of his career here. Hiromu was a madman as always, taking a rana down the stairs at Korakuen Hall, like a lunatic. There was a lot of submission wrestling here too, between Ishimori’s crossface and Hiromu’s triangle choke which he calls “The D”. These two epitomized what the Junior style can be and had a truly worthy final for what was a sneaky strong tournament.

And so it happened.

The magnificent reign of Kazuchika Okada finally came to a close, at the hands of his greatest rival, Kenny Omega. You can read Match of the Month columns from last year to see how I raved about their trilogy. In short, they’re my favorite matches ever.

So you may not be surprised to know that I loved this match, but I actually may be the low man on it. I think maybe because I’d seen a lot of what they did here before, and maybe it didn’t feel quite as fresh.

I struggle to write about this 70 minute epic because there’s so much to it. The flow, the structure, the beats of it all…it was all world class. Omega took some insane bumps and Okada was historically great. This will go down as many people’s favorite match of not just 2018, but of all time.

I got very emotional when Omega won. It was just such a beautiful journey to have gone on these last couple of years. To see him put in these stellar performances but never be able to grab the title off Okada. Everything felt so earned here. It embodies everything I’ve loved about NJPW: they make things feel truly special. Okada’s reign, Omega’s win, the journey, everything. You can’t create moments like this in a week. NJPW earns them.

Match of the Month (September) – Voting