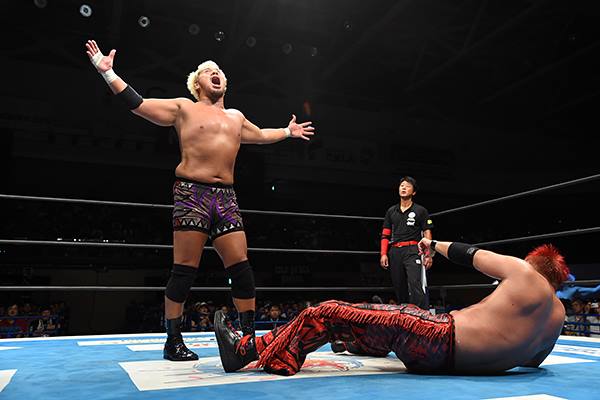 After three straight nights in Korakuen Hall, New Japan wrapped up this four day stretch of the G1 Climax with an A Block event about an hour west of Tokyo. Here’s a look at what took place on the undercard:

I mentioned this in my review of Night 2, I tend to cherry-pick these tag team matches, with some being more interesting on paper than others. From what I saw, these were your typical G1 undercard tags, though there were a few things to take note of. Firstly, The Guerrillas Of Destiny picked up another victory as they (presumably) head towards a shot at the IWGP Heavyweight Tag Team Titles. Secondly, both members of Roppongi 3K scored the winnng falls in their respective tag team matches. Finally, Juice Robinson won his tag team bout against The Bullet Club after hitting Chase Owens with the gutbuster that he uses, called the Juice Box. It’s cool see secondary finishers win matches every so often, just to re-establish that it’s a move that can actually beat someone. So keep an eye out for the Juice Box come Night 8, when Robinson faces Kenny Omega.

These two were in much different situations coming into Night 7. While Michael Elgin was still one of the top men in the A Block (despite a loss to Jay White on Night 5), YOSHI-HASHI came in with an 0-3 record, and in desperate need of a win to avoid being mathematically eliminated from contention. The odds were certainly stacked against him in this particular match, as not only is he banged up, but he lost in his two previous encounters with Elgin (a non-tournament bout at the G1 Finals in 2015 and a B Block matchup in 2016). Ultimately, YOSHI-HASHI was finally able to get his first two points of the tournament with a huge victory over “Big Mike” after hitting Karma. This was a great bout from start to finish, with strong back and forth action throughout. YOSHI-HASHI knew the situation he was in, and really came out swinging in order to stay alive. He took a beating from Elgin (particularly in the closing stages), but despite that, he kept fighting, and the crowd got behind him even more with each kick out. This was easily the best match that YOSHI-HASHI has been involved in thus far, and the fact that it came against Michael Elgin isn’t a shock out. Even though Elgin isn’t talked about that much compared to some of the other guys in his block, he’s quietly been the MVP of the A Block thus far. He’s not having the absolutely stellar matches that the competitors in the B Block are having, but for me, he’s yet to have a bout in this tournament that’s dipped below the **** mark. It remains to be seen if trend will continue for Elgin, but considering who he has left (Bad Luck Fale is the only match that probably won’t come close to what he’s done thus far), I believe that’s a strong possibility. Once again, this was pretty great. ****1/4

After all of the shenanigans we’ve seen thus far with the Bullet Club OG’s, I wasn’t looking forward to this match. It’s gotten to the point where I’m dreading anything in this tournament involving Bad Luck Fale or Tama Tonga. Now we did get another DQ finish here (more on that in a second), but I have to say that, for the most part, I enjoyed the match while it lasted. We got the prototypical New Japan crowd brawl early on, but that led to Fale targeting one of EVIL’s arms. Even though that arm work really didn’t play a factor later on, I’d be curious to see if it becomes an issue for EVIL during the rest of the tour (like Tanahashi’s legs). They also told the story of EVIL turning the numbers disadvantage against him into an advantage. At various points, he turned the referee’s attention to Tanga Loa, and would then use that opportunity to use chairs against Fale on the floor. EVIL essentially outsmarted the two of them, and the english commentary made sure to get that point across. There was a pretty decent exchange between the two before everything went to hell. Fale took the referee out as EVIL went for his EVIL STO, and that led to Tanga Loa getting involved. From there, more people got involved. Tanga Loa got misted by BUSHI, who was then attacked by Tama Tonga, who was then attacked by Tetsuya Naito. Through all of this insanity, EVIL managed to hit Fale with the EVIL STO, but the referee refused to count a pin until everyone else who interfered got out of the ring. Tama Tonga then nailed EVIL with the Gun Stun, and the DQ was called. It was cool to see other members of LIJ running out to back up EVIL in this situation. I’m not going to say much about yet another DQ finish (I’d just be preaching to the choir at that point), but like I already mentioned, the bulk of the match itself really wasn’t that bad. At this rate, it might end up being one of Bad Luck Fale’s better bouts in the tournament by the time it concludes. **1/2

It’s interesting to note that, before this tour, these two had never crossed paths, in terms of being against each other in a match. Suzuki (along with the rest of Suzuki-gun) left for NOAH right as White made his debut as a young lion, while White was on excursion in ROH when Suzuki-gun returned to New Japan in early 2017. During their first official meeting, which was a tag team encounter the night before in Korakuen Hall, Jay White did everything he could to avoid Minoru Suzuki. He used a similar strategy at the start of this match, and it did lead to hit getting the advantage in an early brawl on the floor. However, that advantage wouldn’t last long, as Suzuki would soon turn the tables on White, and the bout became a more even affair. In a particularly cool moment, Suzuki just nonchalantly broke out of White’s Muta Lock by just torquing one of White’s hands. Towards the end, White tried to resort to a low blow, but Suzuki caught him, and promptly pinned “Switchblade” following the Gotch Style Piledriver (he also shouted in White’s face when he made the pin, which was cool). This was by no means a blowaway match, but as a whole, it was pretty solid. The crowd was into it throughout, the length of the bout (about ten minutes or so) was perfect, and the action itself was good. White tried a few dirty tricks, and in general, pounced on the opportunities as they became available. Unfortunately, they didn’t have the desired impact on Suzuki, who kicked White’s ass enroute to victory. With that loss, White’s 3-0 undefeated streak in his G1 Climax debut came to a screeching halt. ***1/4

Believe it or not, these two had a singles encounter a few months ago on a ROH live event in Doncaster, England. Tanahashi got the win on that night, and he defeated Page again after hitting the High Fly Flow. This wasn’t a great match, but it definitely a step above their first bout in ROH. The story of Tanahashi’s injured legs continued here, as Page targeted his right leg after the opening exchange, utilizing a stretch muffler and later a figure four leglock to inflict as much damage as possible. Page would follow up with some of his signature offense, but it wasn’t enough to keep Tanahashi down. The dragon screw proved to be the saving grace for Tanahashi, as it allowed to regain control on a few occasions, and eventually led to his victory. Again, this was a really good match that featured some very solid action and held my attention throughout. I was a little surprised by the result, as I expected Page to pick up the win (especially after Tanahashi won that aforementioned first meeting in ROH). Alas, Tanahashi now moves into a three-way tie for first place, while Page is still stuck at two points. ***1/2

The result of this one was fairly obvious on paper, especially with Okada on the comeback trail after starting 0-2. That being said, this was still a very solid main event. While Okada did go right after Makabe as soon as the match began, the first half seemed a little mundane. If it stayed at that pace, this would’ve been totally average, but fortunately, the action really picked up in the second half. There was some good back and forth between the two in the final few minutes, with Okada ultimately putting Makabe away following a Rainmaker. It should be noted that Okada has added a new twist to his usual repertoire in the form of a rolling lariat before hitting the Rainmaker. He did it here against Makabe, and I believe he won in a similar fashion when he faced Adam Page on Night 5. What’s also interesting is that Okada is still coming out with his balloons and the remixed theme music. I figured he might revert back to his usual self one he ended that losing streak, but I guess this “Broken Okada” thing will be continuing throughout the rest of the tournament. Again, this won’t be a G1 main event that you’ll remember, but in terms of quality, I would say it’s about on par with the Adam Page/Hiroshi Tanahashi bout that came before it. ***1/2

Even though the B Block continues to be the superior of the two blocks, G1 Climax 28 Night 7 proved that not everything is doom and gloom within the A Block. YOSHI-HASHI had a great match (his best of the tournament thus far) with Michael Elgin who, from a match quality standpoint, continues to be the MVP of the A Block. The final three bouts all ranged from good to very good, while Bad Luck Fale had a decent outing against EVIL, despite the fact that we got all of the expected shenanigans. Again, the B Block is the much better block (as we all know), but that doesn’t mean the A Block will be devoid of anything that’s worth a watch.

Here are the updated standings in the A Block, after Night 7:

Right now, we have a three-way tie for 1st Place atop the A Block, with a couple of logjams behind the leaders. Now as the tournament progresses, I’m sure we’ll continue to see some of the stories that we’ve been expecting to see, such as Okada and Suzuki making their way back to the top after both started 0-2, while guys who had strong starts like Elgin and Makabe start to fall behind. Seeing Tanahashi and Jay White towards the top of the A Block shouldn’t come as a huge surprise, but EVIL is something that people should keep their eye on. Some might see him as a guy that might slide back, but I don’t think that’ll necessarily be the case. Let’s not forget that EVIL finished with 12 Points last year. He’s going to be a contender all the way through, and with Bad Luck Fale (who usually scores 10 or 12 Points) having an unusually poor tournament in terms of the standings (due to the Firing Squad angle) EVIL is shaping up to have another strong finishing position, despite the fact that he’s probably not going to win the A Block. Again, don’t dismiss EVIL because he’s on top of the leaderboard this early. 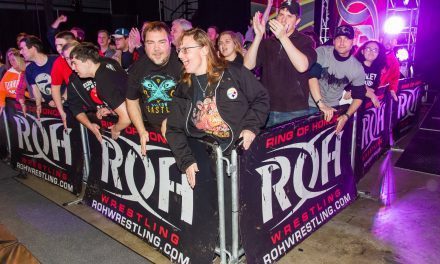 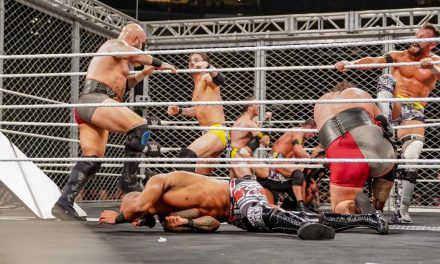